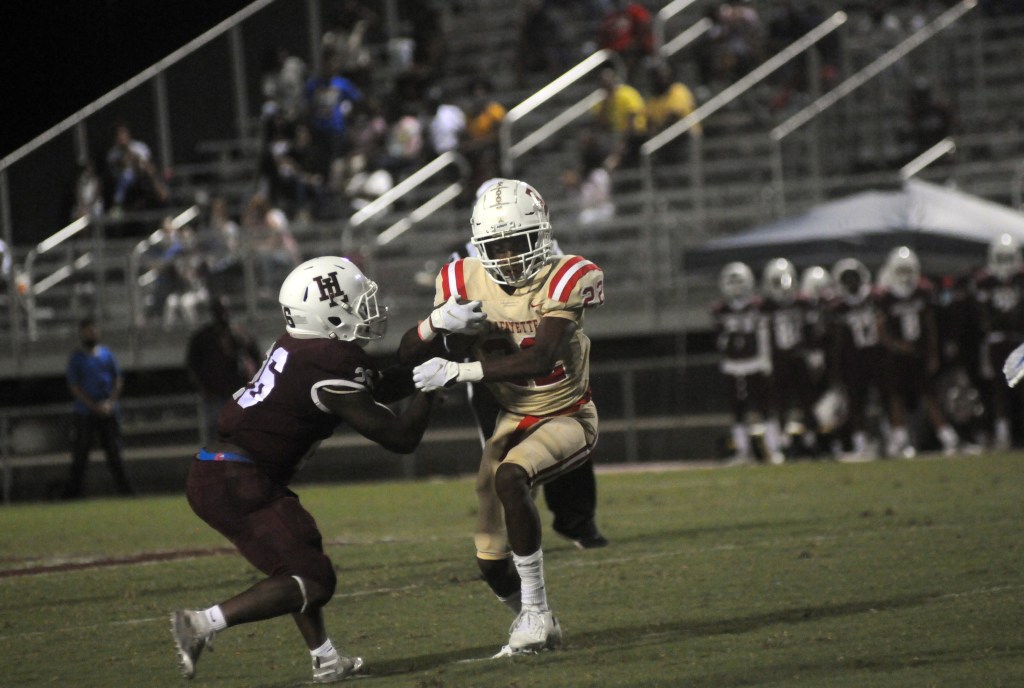 Lafayette running back Trikyus Woodall (22) carries the ball upfield past Horn Lake's Jayden Sanders (26) in their game at Horn Lake High School on Friday, Sept. 4, 2020. Friday's game was both team's 2020 season opener after the football season was delayed by two weeks due to the COVID-19 pandemic. (Jake Thompson/Oxford Eagle)

HORN LAKE — It may have felt like a lifetime getting here but the 2020 high school football season is officially underway and the Lafayette Commodores put their best foot forward on Friday.

It was a different look on the sidelines with all of the COVID-19 protocol being implemented, but it looked the same to the Commodores on the field.

The Commodores dominated the Horn Lake Eagles with a stout defense and the running game in their 21-6 win at Horn Lake High School.

“That was so much fun,” said Lafayette head coach Michael Fair. “Our kids, I thought, really played hard. We’ve been saying since the beginning of this COVID stuff, ‘Control what you can control, which is your effort and your attitude.’ Boy, did we do that tonight.”

After what looked like nothing more than a feeling out process the first couple drives of the game for Lafayette (1-0), they clicked things into another gear after recovering a Horn Lake (0-1) fumble late in the first quarter.

Quarterback Tyrus Carmichael-Williams cashed in the Horn Lake mistake five plays later with a 15-yard touchdown run to give Lafayette the early 7-0 lead.

Losing last week’s scrimmage against South Panola due to weather, Fair was uncertain what his team would look like and

There’s so much you don’t’ know,” Fair said. “We had no idea what they were going to line up. A first year head coach who is doing a tremendous job up here. But we didn’t know if he was going to change things. You just never know. The unknown was tough going in.”

Williams continued his dominance in the run game two possessions later with a 52-yard touchdown run on the first play of the drive.

The junior finished with 103 rushing yards and two touchdowns on eight carries, averaging nearly 13 yards a carry. Williams was also 7-of 19 through the air for 74 yards.

“First game stuff in passing game and our timing was a little off,” Fair said. “First time maybe you see full speed with a defender trying to jam the line of scrimmage and some new things that we saw. (The passing game) is coming and I think you can see what we’re trying to do offensively that’s different and we’re trying to cater to what (Williams) can bring to the table.

Lafayette’s defense was the stingiest it has been in quite a while on Friday. Horn Lake crossed the 50-yard line a handful of times. The Commodores forced three turnover on downs by the Eagles with two coming inside their 20-yard line.

“I’m glad that somebody else is having a hard time trying to run a play against that bunch, because we have in practice since day one,” Fair said. “It was fun to watch those guys compete against somebody else. …Those guys are so confident in what we’re doing, defensively, and you can see it.”

Lafayette turns their attention to next week’s Crosstown Classic showdown at Oxford. Kickoff is set for 7 p.m.