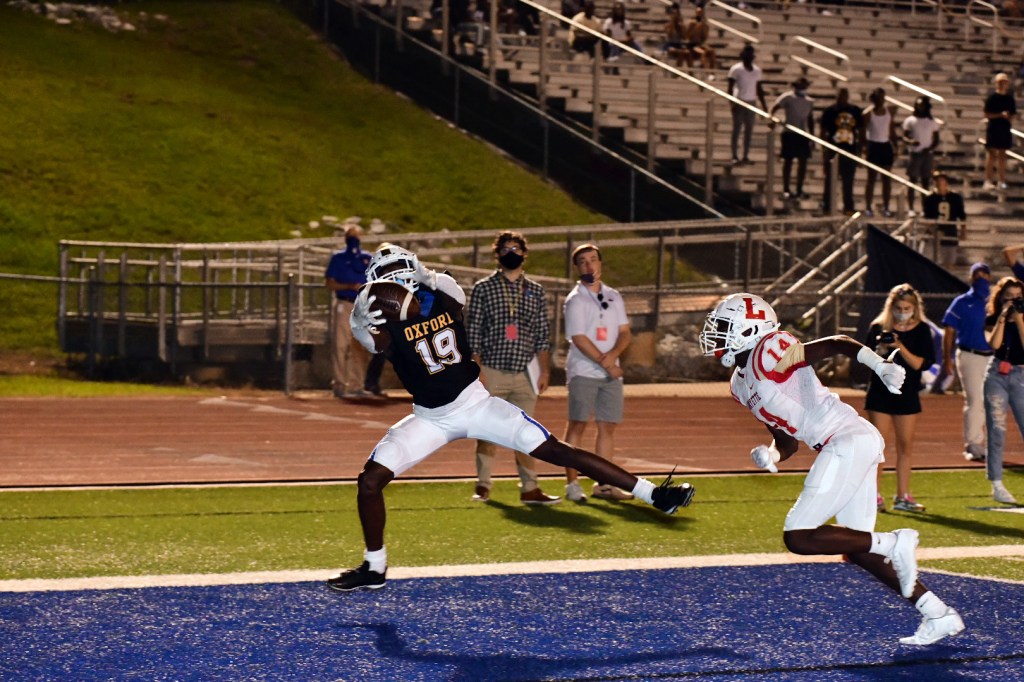 Oxford’s Jalen Webb (19) pulls in a touchdown against Lafayette’s Braylon Robinson during the second quarter of the Crosstown Classic at Bobby Holcomb Field on Friday, Sept. 11, 2020. The Chargers won 33-22.

Two years ago Oxford and Lafayette played what many considered the best game in the history of the Crosstown Classic, but Friday’s 50th edition may have topped it.

Oxford and Lafayette met at Bobby Holcomb Field and provided plenty of fireworks for those were able to attend under COVID-19 protocols and attendance rules.

In the end, the Chargers retained control of the Crosstown trophy with a come-from-behind 33-22 win over the Commodores. Oxford (2-0) has now won eight of the last night meetings with Lafayette.

Trailing by 16 points, the Chargers rattled off 27 unanswered points the last 24 minutes and one second of the game.

“We obviously had a rough four or five minutes there to end the second quarter,” said Oxford head coach Chris Cutcliffe. “It’s one of those things. We didn’t panic. Obviously the wheels kind of fell off but we felt like we could regroup and come out and play good football in the second half and I thought we did.”

After what appeared to be a defense-heavy first half where the Chargers had a 6-0 lead with just over two minutes left in the second quarter.

Quarterback Tyrus Carmichael-Williams put Lafayette on the board with an 11-yard run followed by a converted two-point try to give the Commodores the 8-6 lead.

The Chargers then fumbled the kickoff return, which the Commodores recovered. Two plays later, Brendan Toles scores on a 55-yard run to give Lafayette 15 straight points in three plays.

A turning point in the game came with a minute left in the half. Lafayette was hit with an unsportsmanlike conduct penalty where Williams got physical with an Oxford player following the play. Williams was ejected from the game.

“We had chances. We’ve just got to handle adversity,” said Lafayette head coach Michael Fair. “It was just a tough night. I don’t much that went our way from the second quarter on. We took some big time punches out there and didn’t always respond like I thought we should have.”

Backup quarterback Taylor Tarver came in and kept the drive going, leading the Commodores to another touchdown off a Jayden Reed run late in the second quarter.

Oxford’s comeback began with quarterback Trip Maxwell’s touchdown pass to Jalen Webb came with one second left in the first half to spark the rally the rest of the game.

Maxwell came up with another clutch play, hitting J’kyvious Wortham for an 85-yard touchdown pass midway through the third quarter to get back to within three points following a failed two-point conversion attempt.

Linebacker Tristan Shorter came up with the pick-six two plays later to give the Chargers the lead once again, and for good, going up 26-22 in the third quarter. The third touchdown of the night by Maxwell sealed the game and the winning margin late in the third quarter.

“I thought both quarterbacks played well,” Cutcliffe said. “Threw the football well and some big time plays by our receivers across the board.

Oxford’s Michael Harvey also threw a touchdown to Wortham, coming in the first quarter for the early lead.

Lafayette travels to Mooreville next week for their final tune up before entering Region 1-5A play at West Point on Sept. 25. Oxford enters their bye week before starting Region 1-6A play at Southaven the following week.