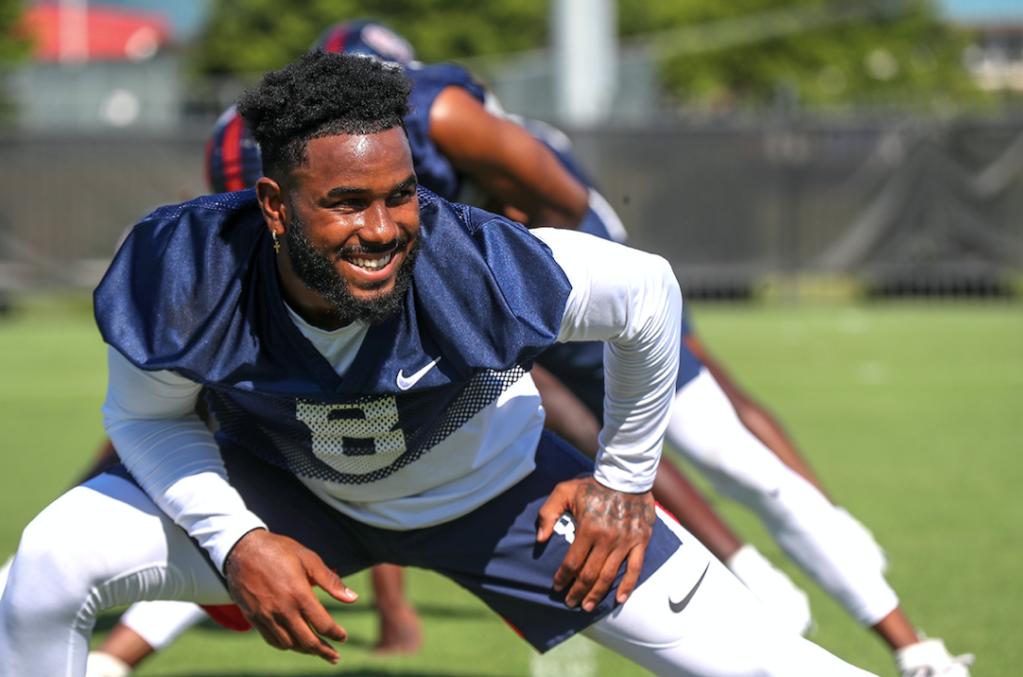 It was the touchdown celebration seen around the world.

Elijah Moore’s now infamous celebration where he hiked his leg like a dog following a late touchdown which would have tied the game or given Ole Miss the lead with a successful two-point try, during the 2019 Egg Bowl ran endlessly for days in video and on social media. It is something the wide receiver is ready to move on from.

Moore’s antics with four seconds to go resulted in the point-after try to tie Mississippi State and seemingly force overtime to be backed up due to an unsportsmanlike conduct penalty. Luke Logan then missed the  35-yard attempt and the Bulldogs went on to win back-t0-back Egg Bowl trophies.

Now, nearly 10 months later, Moore is ready to put the past behind him and focus on 2020.

“I just try to flip the page,” Moore said when asked about it last week. “I try to leave the past in the past and become a better player overall. Just learn from my lessons. I’ve got a new coach, and that’s been a blessing.”

Following the conclusion of the Egg Bowl, Matt Luke was relieved of his duties as head coach and Lane Kiffin was hired in December.

The change from Luke to Kiffin brings the potential for the Rebel offense to have a more pass-first mentality with Kiffin’s notable air raid approach.

For Moore, and the rest of the Rebel receivers, that is a breath of fresh air. The junior finished with 67 catches for 850 yards and six touchdowns.

“I feel like it allows us to be the players that we are. It allows us to tap into what we’re good at,” Moore said of Kiffin and new offensive coordinator Jeff Lebby’s offensive approach.

The Rebels have been hit hard by COVID-19 in recent weeks, but Kiffin offered up some positive news during his weekly press conference on Monday.

With less than two weeks until their season opener against Florida on Sept. 26 (11 a.m., ESPN), the Rebels appear to be getting healthier and flattening their own curve against the novel coronavirus.

Kiffin said there were no new positive cases reported after the latest round of COVID-19 testing conducted last week.

“So that was great,” Kiffin said. “It’s really good. I give a lot of credit to the kids for that for a time when I think a lot of college kids are getting it. So our kids need to continue to do a good job with that.”

There are only “a couple” of players still going through quarantine protocols, according to Kiffin.

“We’re almost all the way back,” Kiffin said.

With a roster receiving a near clean bill of health, at least as it pertains to COVID-19, it comes at a good time as the Rebels will have a game simulation this Saturday inside Vaught-Hemingway Stadium. It will serve two purposes with one being to allow the players and staff to see what all the new COVID-19 protocols will be like during games this season.

There will also be what Kiffin called a “Florida service team,” which will serve as scout teams for both the offense and defense to go against as they begin preparation for the Gators.