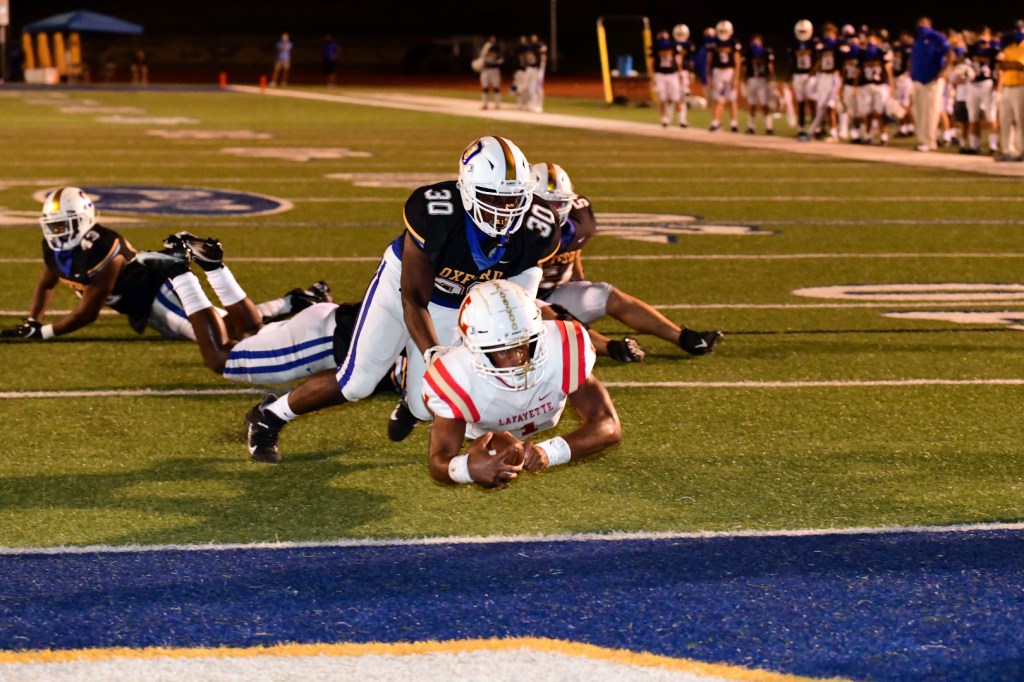 Lafayette’s Tyler Carmichael-Williams (1) dives into the endzone in the second quarter against Oxford at Bobb Holcomb Field on Friday, Sept. 11, 2020. The Commodores travel to Mooreville this week and will be with out Williams for the first half after he was ejected in the first half of the Crosstown Classic. (Joey Brent)

The first two weeks of this amended 2020 season are in the books and region play is inching ever closer.

Some teams have gotten all their proverbial hay in the barn ahead of region play beginning, like Oxford, but other teams still have a game or two to go before entering the push towards the playoffs.

Lafayette normally has a week off between last week’s Crosstown Classic showdown with the Chargers before starting region play. But, with the loss of two games at the beginning of the season, the Commodores decided to fill their empty Friday with a game at Mooreville.

The Commodores are looking to bounce back after their 33-22 loss to Oxford last week. After a slow start, the Commodores went on a 22-o run towards the end of the first half in the span of less than 10 plays. But, things took a turn when starting quarterback Tyrus Carmichael-Williams was ejected from the game late in the second quarter after attempting to hit an Oxford defender in the helmet.

Williams sat out the second half of last week’s game and must also sit out the first half of this week’s game against the Troopers. Taylor Tarver will get the start after coming in to replace Williams last week. Tarver helped lead the Commodores to a touchdown in his first drive in against Oxford.

Due to COVID-19 and the potential for players to be out during the season, or have already been out during preseason camp, Lafayette has taken measures to make sure players are ready when needed.

“We’ve had some issues with some quarantine stuff and we’ve had some guys out,” Fair said after last week’s game “Look, there’s no excuse. We brought some guys over here to win a football game and Taylor I thought did a tremendous job stepping in when his number was called.”

After missing the first week of the season due to the entire team being in quarantine two weeks leading up to Sept. 4, Water Valley is looking to string a winning streak together.

The Blue Devils traveled to Bruce in their season opener last week and came away with a 45-0 win over the Trojans. After a week on the road, the Blue Devils (1-0) return home for a mini home stand, starting with Calhoun City on Friday.

The Wildcats (0-2) had Water Valley’s number last year with a 14-7 win at home. Prior to that, the Blue Devils have managed to have consistent success over Calhoun City, who is entering this week after opening the season with losses to Choctaw County and North Panola.

Despite losing the first two games off their schedule, Oxford is choosing to stay the course of their normal schedule and stay at home this Friday.

The Chargers (2-0) chose to not fill their open date with a team, opting to instead use this Friday to rest up and get ready for the seven-week grind that is their Region 1-6A schedule.

It was a decision that head coach Chris Cutcliffe made during the summer once teams knew when the 2020 season would commence.

“I’m glad we have a week off. I think that’s the best thing for our team,” Cutcliffe said. “I think we’ve got a week to regroup and fix some problems and we have some things that we need to fix. We know tough or region schedule’s going to be when we start with Southaven.”