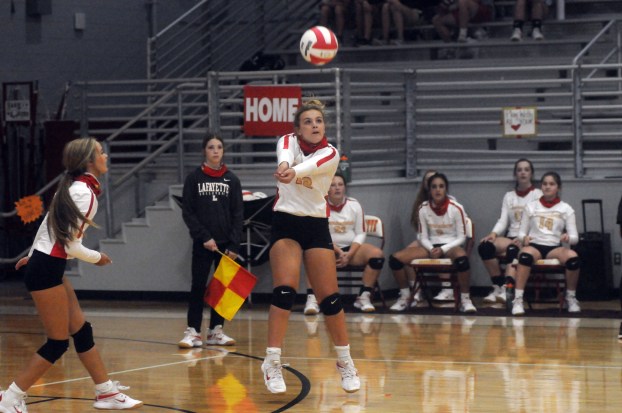 In between points during the third set, Lafayette head coach Kelsie Poole said the words “mental toughness” to her players, something that has been tough for the Commodores keep for an entire match.

Thursday night’s match against the Saltillo Tigers tested the Commodore’s toughness. The team prevailed to withstand a third set surge to defeat the Tigers 3-1 (25-17, 25-17, 24-26, 25-22) inside the Lafayette High School gym.

Both the first and second sets saw the Commodores and the Tigers (7-4, 0-2) trade leads in a back-and-forth affair until Lafayette managed to pull away late in each set for the quick 2-0 lead.

It was in the third set where the Tigers took it to the Commodores, who struggled to find what gave them their wins in the opening two sets.

“We can’t do really good things and then when something goes wrong, volleyball is a game of errors and you can’t get down on that one point,” Poole said. “We have to have mental toughness and move on to the next point. We’ve been pretty much stressing that (all season). …I don’t think it was lack of focus, it was panic. We’re working on some things and I wasn’t upset about the Xs and Os.”

The Commodores found that mental toughness again in the fourth set, holding off the Tigers and winning the final two points to clinch the match.

Brennice Kennedy provided much of the offensive production for the Commodores with a match-high 14 kills to go with her eight digs. Sara Jane Wilburn recorded a match-high 21 digs and one ace. DeeDee Shaw and Caroline Crockett each finished with nine digs.

“We have been working on our power, reaching, transitioning to the correct place and (Kennedy) answered everything that we’ve been challenging her at practice. She did a phenomenal job,” Pool said.

Lafayette travels to Water Valley for a match on Monday at 6 p.m. before hosting region foe Center Hill on Tuesday at 6 p.m.

There will only be four chances to catch Ole Miss soccer in 2020, but the program announced how many fans... read more