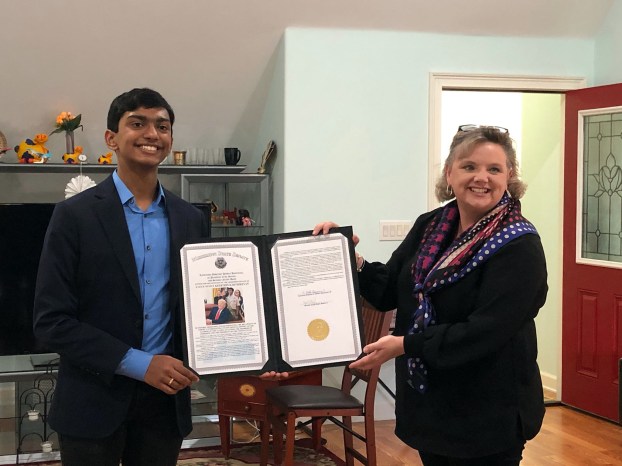 Keerthin Karthikeyan, left, is presented with a resolution in his honor that was passed by the Mississippi Senate. Senator Nicole Boyd, right, made the presentation to Karthikeyan at his home earlier this month. (Courtesy of Premalatha Balachandran)

Keerthin Karthikeyan is doing his part to make Mississippi a better place and the state is honoring  him for his efforts.

The 15-year-0ld received a resolution from the Mississippi Senate, honoring Karthikeyan for his achievements as an Eagle Scout. It was an honor Karthikeyan did not expect to receive.

A couple weeks ago, Karthikeyan’s mom received a phone call from Senator Nicole Boyd. The phone call was due to Lieutenant Governor Delbert Hosemann and the rest of the State Senate had passed a resolution in Karthikeyan’s honor.

“I feel honored that I’m officially a part of Mississippi’s history and I’ll forever be in Congress’ books,” Karthikeyan said of the resolution. “That was a huge fortune for me to take in. Also, it was nice to be honored for the duties that I’ve done for Mississippi, which is really nice.”

Knowing there is a bound resolution in his honor sitting in his living room is still a surreal feeling for Karthikeyan. Boyd came to his house a few days after making the phone call to present Karthikeyan with the signed resolution.

The resolution includes a photo of Karthikeyan with President Donald Trump when he met the 45th President of the United States during a trip to Washington, D.C. in March where he helped deliver the Boy Scouts of America’s 2019 Report to the Nation. Karthikeyan also met U.S. Senator Roger Wicker, Congressman Trent Kelly and Speaker of the House Nancy Pelosi.

Karthikeyan, who is a member of Troop 45 in Oxford, put together an American Flag Retirement Dropbox as part of his community service project towards earning the rank of Eagle Scout. People deposit retired flags to the dropbox which are then taken to the Oxford Fire Department for a flag retirement ceremony. The ceremony consists of the flags being respectfully cut and burned.

The COVID-19 pandemic has impacted the amount of flags being taken to the dropbox, but Karthikeyan said prior to the pandemic hitting Lafayette County in mid-March, the dropbox was continuing to be filled with flags.

With all the achievements Karthikeyan received for his efforts to make his home state a better place during the pandemic, it has helped him find a positive message to take out what has been an unconventional year in many ways.

“Through this experience I’ve been able to see that there is an alternative. That there are other ways to get to the path you want to go on despite all the setbacks from COVID-19,” Karthikeyan said. “So, that was really a big eye-opener.”

With the weather turning cooler as the calendar gets closer to Fall, restaurants around the Downtown Square will soon be... read more