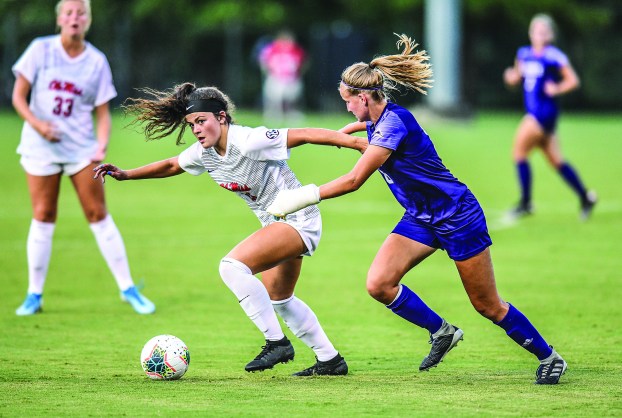 Ole Miss' Mo O'Connor (22) vies for the ball against North Alabama's Kate Wiseman (8) at the Ole Miss Soccer Stadium in Oxford, Miss. on Thursday, August 22, 2019. O’Connor is expected to play an even bigger role in 2020 during her sophomore season. (Bruce Newman, Oxford Eagle)

Matt Mott gets anxious these days, which means Ole Miss soccer’s 2020 season is finally getting underway.

The Rebel head coach normally gets anxious, it’s just usually in August and not mid-September, but 2020 has not been a normal year.

The Rebels will open their season on Saturday when they host Texas A&M at the Ole Miss soccer complex. This year’s season is an eight-match, conference only schedule due to the ongoing COVID-19 pandemic. The Southeastern Conference announced the schedule changes for all other fall sports, besides football, last month.

When Mott and his staff got word from the league office of when their season would officially begin, practices became more focused and slowly began shifting towards prepping for the Aggies.

“We’re ready. We’re as ready for Texas A&M as we can be at this point since we haven’t played any games,” Mott said. “The players we know and the style they play. So, we’re pretty comfortable about that. Our team’s ready. They’ve worked really hard in the offseason and finally practicing and getting ready for a game is super exciting.”

The team felt the effects of COVID-19 throughout the summer and preseason, dealing with players in quarantine and a few testing positive, but Mott said he has had his entire team at practice on Monday for the first time. The full roster will be available this season as zero players opted out for 2020.

The Rebels will have the SEC’s active scoring leader at their disposal in Channing Foster. Foster has scored 30 goals in Rebel career. Foster also found herself on the SEC’s 2020 Preseason Watchlist for the third straight year.

“Channing’s playing at a really high level,” Mott said. “(forward) Lonnie Mulligan is another really dangerous player for us and Haleigh Stackpole. Those guys I think are really excited and ready to go.”

One player that Mott has high expectations for and has seen a change their game is former Oxford High School standout Mo O’Connor. The forward is entering her second season with the Rebels.

In 2019, O’Connor played in 20 games while starting in 11 of them. She recorded two goals and earned four points during her freshman campaign. The sophomore is expected to take on a larger role in 2020.

“Mo has completely transformed, I think, over the summer,” Mott said. “She’s worked really hard on fitness and really hard on her soccer and she looks fantastic. She’s going to play significantly for us as a starter-level player. She may start for us and she may not, but it will be kind of game-by-game. …I think we’re going to see another big step for her in her sophomore year.”

The Rebels and Aggies will kick off the season at 5 p.m. on Saturday. The match will be televised on the SEC Network.

In between points during the third set, Lafayette head coach Kelsie Poole said the words “mental toughness” to her players,... read more