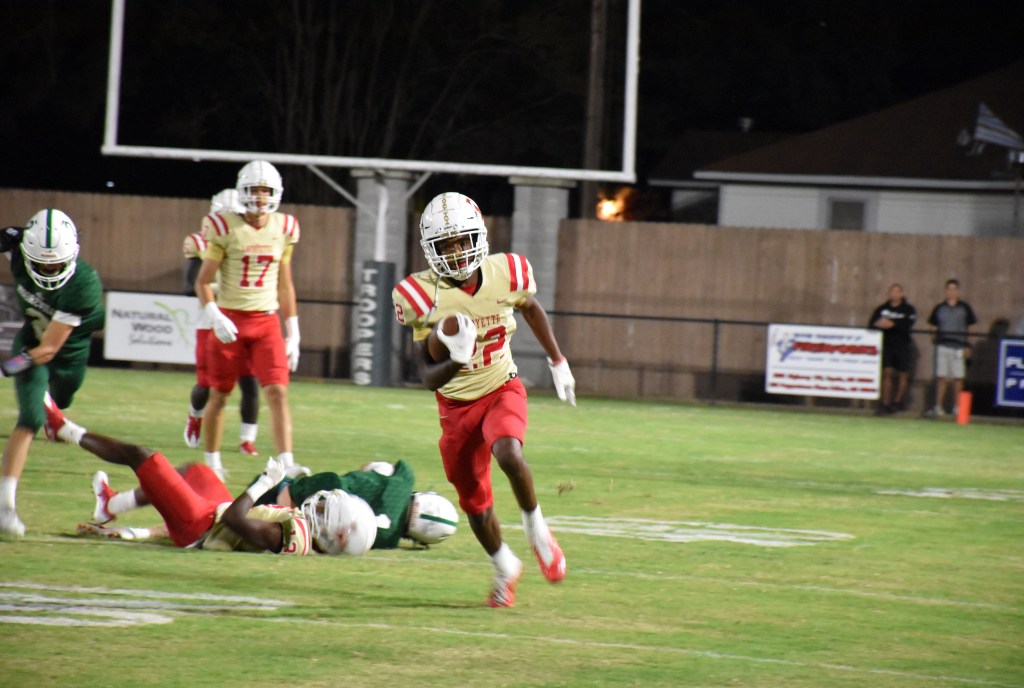 MOOREVILLE — Without Tyrus Williams in the lineup in the first half, the Lafayette didn’t miss a beat, even when he was able to play.

The Commodores scored early and often to defeat the Mooreville Troopers 42-7 at Steve Bass field Friday.

Lafayette head coach Michael Fair scheduled this matchup just weeks before the season to make up for the games they lost in late August. In three non- conference games, Fair learned a lot from his squad.

“I love this team,” Fair said. “The way they go to work everyday. I love the way we prepare…we’re playing so many young guys. Every rep they get, they get better. Tonight was real important in that.”

The Commodores (2-1) scored on four of their five offensive drives in the first half en route to a 28-0 halftime lead. Taylor Tarver accounted for three touchdowns in place of Williams. He threw touchdown passes to Kityun Turner on the game’s opening drive and another to Kylen Vaughn with 6:55 left in the first half. Tarver had a rushing touchdown of his own on the following drive. For the game, Tarver completed 10 of 16 passes for 139 yards while rushing for 27.

“(Tarver) came in and did a great job. He prepared like a senior should,” Fair said.

On Lafayette’s first offensive drive of the third quarter, Tyrus Williams found the end zone on the very first play from 46 yards out. Williams also threw his first career touchdown pass to Javon Simpson with 6:18 left in the third quarter to conclude their scoring.

“(Williams) showed us what he was capable of for sure,” Fair said. “We had a plan for him, getting him reps. We were hoping for a few more, but he was dynamic tonight.”

Early on, Mooreville (1-2) quarterback Dawson Phillips kept the Commodore defense on their heels, after failing on 4th down on their first drive, Lafayette settled in and never looked back.

“Out defense plays fast, and that’s what they’re doing really well this year,” Fair said. “We love watching that. Our front gets after it. (Mooreville) was four-wide, five-wide all night and used their quick game. They had a good game plan against us.”

Next week, the Commodores to open up Region 1-5A play on the road against the four-time defending 5A champion West Point Green Wave at Hamblin Stadium.

“It’s going to take a great effort,” Fair said. “Our guys are not intimidated by West Point. It’s going to be a big game. We’re going to have to give our best effort, take care of the football and be physical on the line of scrimmage. We have a big week ahead of us.”