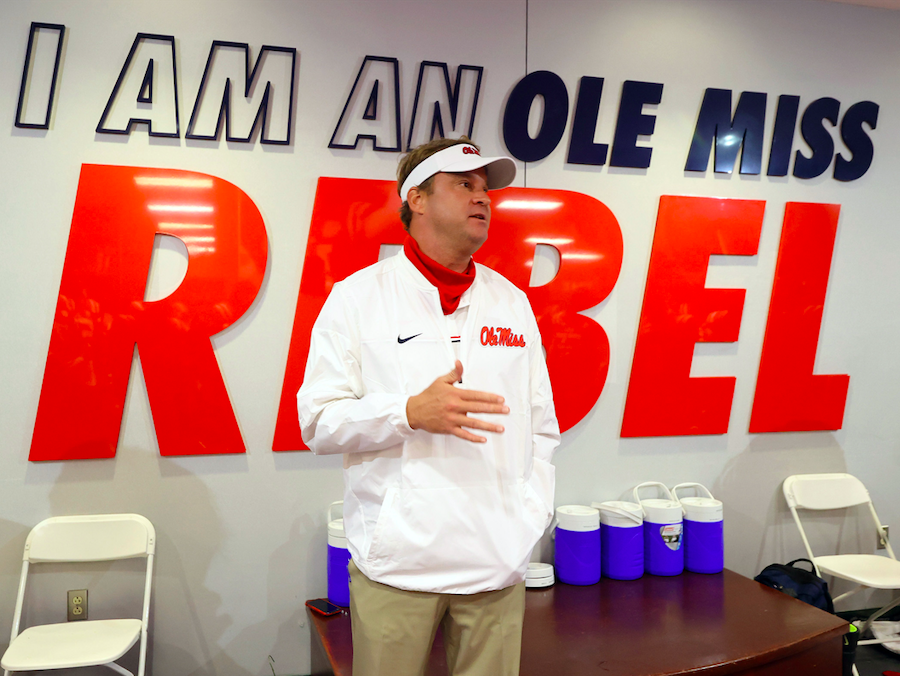 Ole Miss head coach Lane Kiffin speaks with this team during a scrimmage on September 19th, 2020 at Vaught-Hemingway Stadium. The Rebels host No. 5 Florida on Saturday to begin the 2020 season. (Joshua McCoy/Ole Miss Athletics)

The opening week of the Southeastern Conference’s football season has arrived and with it a top-five opponent for Ole Miss.

The No. 5 Florida Gators come to Oxford on Saturday (11 a.m., ESPN), marking the return of Dan Mullen to Vaught-Hemingway Stadium.

During his weekly press conference on Monday, Lane Kiffin was mum on who would get be under center at the start of the game. Even the Rebels’ first depth chart of the season, which was released on Monday, could not make a decision.

Listed at the quarterback position was Matt Corral and John Rhys Plumlee with the word “OR” between them.

Both quarterbacks have been presumed to see playing time each game. Kiffin himself has even said as much, but looking between the lines and taking context clues from what the first-year Rebel head coach has said following each Saturday scrimmage, Corral appears to have the edge over Plumlee.

Coming out of their mock game this past Saturday, Kiffin noted the quarterback play was a little shaky by both of his potential starters.

“(We need) More consistent quarterback play,” Kiffin said. “You know, it wasn’t a bunch of fumbles. We’ve been pretty good with ball security. It has been interceptions and usually it has been the quarterback. Sometimes maybe a tipped pass or something like that, but these are either inaccurate throws or poor decision making. So, we’ve got to get back to playing like we were initially, because the first scrimmage they were both really good.”

Come Saturday, if Corral gets the nod to start the season opener, there has been the idea of possibly using Plumlee in other positions. Kiffin has not shed much light on that possibility throughout fall camp, even saying Plumlee is only taking reps at quarterback given he is in a tight competition with Corral.

Kiffin was asked again about the prospect of Plumlee playing somewhere else on the field and if he and offensive coordinator Jeff Lebby had worked up any packages that included the Oak Grove standout standing somewhere else than behind the center.

Kiffin continued to keep that idea in the dark, choosing to not divulge any specific offensive schemes involving Plumlee.

“I mean that’s tough to answer,” Kiffin said. I mean one of them is going to start and there’s a good chance both of them will play.”

The Rebels continued to get good news on the medical front last week.

Kiffin said the program did not have any new positive cases of COVID-19 following the latest round of testing. That is the second week in a row the program has not reported a positive case. Kiffin also said all players are out of COVID-19 prototols and out of quarantine.

“Yeah, we are now two weeks in a row with zero (positive tests), so we’ve been very fortunate here,” Kiffin said. “Especially these are the two most important because you would obviously be out for the opener. Nobody got it so hopefully will be three weeks in a row.”

Per the SEC’s COVID-19 protocols, each team will be tested three times during game weeks.

Despite the team being free of COVID-19, currently, there were still some players who were still recovering from injuries. Kiffin said some players were dealing with “hamstring-type injuries and things,” but hoped to have some of them return to the practice field by Tuesday.