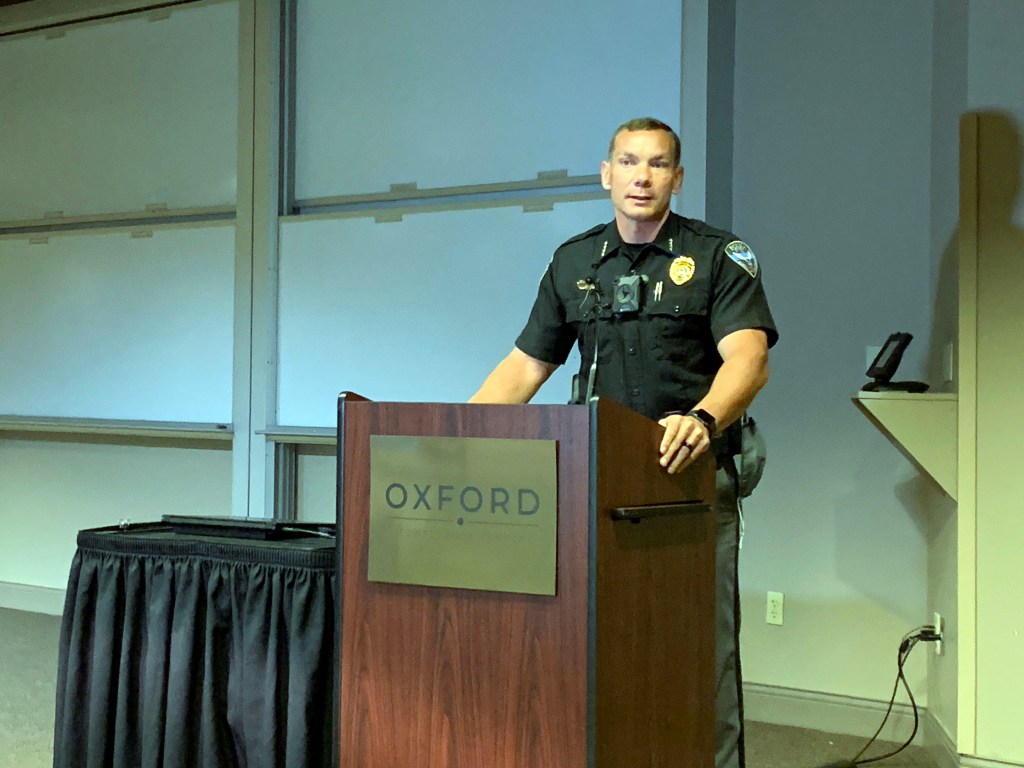 Oxford Police chief Jeff McCutchen speaks against Initiatve 65 during a press conference at the Oxford Conference Center on Tuesday, Sept. 22, 2020. If passed on Nov. 3, Initiative 65 would legalize the use of medical marijuana in Mississippi. (Jake Thompson/Oxford Eagle)

A major issue in Mississippi on November’s ballot is the proposition to legalize medical marijuana with Initiative 65 and Initiative 65A.

During a press conference at the Oxford Conference Center on Tuesday, Oxford and Lafayette County law enforcement officials spoke out against them. Oxford Police chief Jeff McCutchen and Lafayette County sheriff Joey East each presented their case as to why they are not in favor of Initiative 65 passing.

When it comes to Initiative 65 it can get a little confusing, since there are essentially two versions of the same issue on the Nov. 3 ballot.

Initiative 65 supports approving the medical marijuana amendment, which would allow medical marijuana treatment for more than 20 specified qualifying conditions and will allow individuals to have up to 2.5 ounces of marijuana at one time. There will also be a marijuana sales tax at the current Mississippi sales tax rate of 7 percent.

“For us, and Oxford, just a couple years ago we were seeing a spike in prescription drugs and it falling into the hands of kids,” McCutchen said. “The state then put together a program and drop boxes so that you could come and give your unused medication and put it in these boxes. What’s going to happen to 2.5 ounces of marijuana every two weeks? That’s 10 marijuana joints everyday. 300 a month. What’s going to happen to those unused marijuana joints? Who’s most at risk, and it’s going to be our kids. Those are the ones who are going to be most at risk.”

If Initiative 65 passes, the Constitutional amendment would keep mayors and city councils from restricting where marijuana dispensaries are placed. During the press conference it was referenced that Oklahoma has over 2,200 dispensaries and a comparable number use for Mississippi was 20 dispensaries per county.

Sheriff East stated a dispensary could be placed within 500 feet of a school and cited a nearby gas station across the street from Della Davidson Elementary that could be allowed to have a dispensary next to it.

The potential for a “high impact” of crime was also referenced by East and McCutchen if Initiative 65 were to pass.

“It’s not about helping those with chronic illness or pain. What it is about, is addiction for profit,” East said. “That’s what it’s about. It’s about greed. It’s about money. It’s about power and my opinion has nothing to do with health and wellness of our state, of our communities or our families.”

There is another version of this medical marijuana initiative, called Alternative 65A. The alternate version would restrict smoking marijuana to terminally ill patients, require pharmaceutical-grade marijuana products and treatment oversight by licensed physicians, nurses and pharmacists. Tax rates, possession limits and certain other details would be set by the legislature under Alternative 65A.

Katherine Panel, medical director of Right Track Medical Group and Dr. Ed Hill of the Mississippi Board of Health were also in attendance at Tuesday’s press conference and spoke against Initiative 65.

Mississippi Senator Nicole Boyd along with state Representative Clay Deweese helped put the press conference together. At it’s conclusion, Boyd spoke on why she felt Alternative 65A is the better of the two choices, if the initiative passes.

“(Alternative) 65A is a better alternative because the legislature can look at where there’s conflict in the law,” Boyd said. “Unfortunately, if (Initiative) 65 passes, this mandates this conflict. That’s one of the issues is a problem with this. It creates a lot more bureaucracy and costs a lot more to administer programs.”

For those who are unable to vote on Nov. 3, or eligible for early voting, can do so now at the Lafayette County Courthouse. Absentee voting began on Monday and runs through Oct. 31.