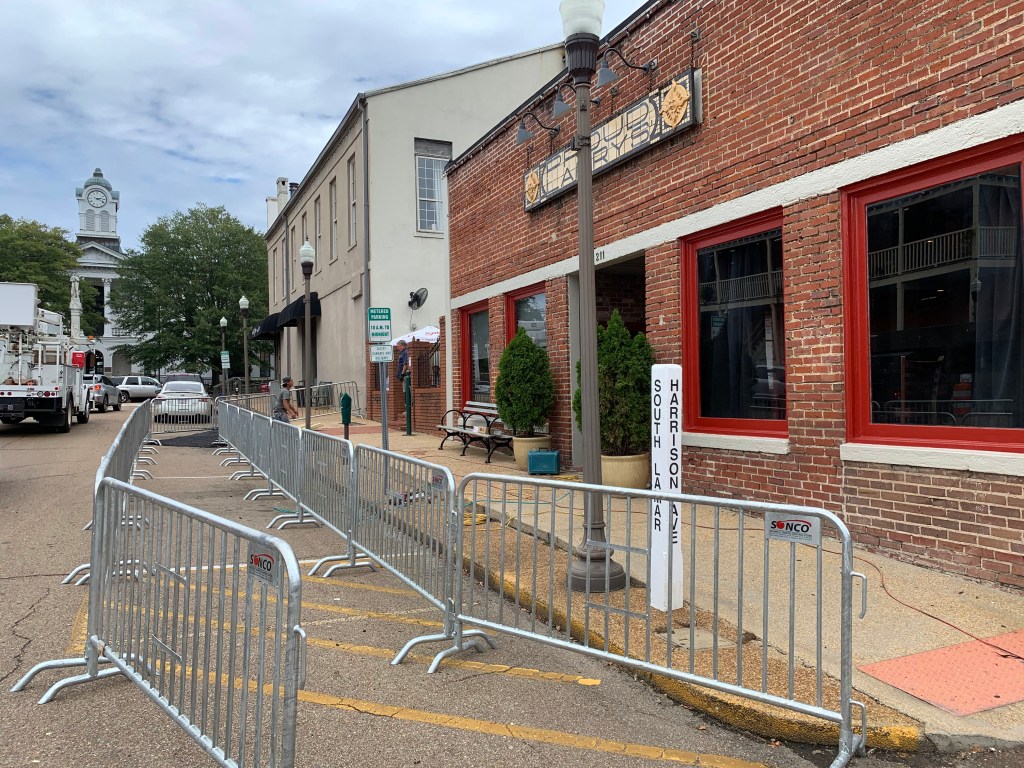 Proud Larry’s is one of five new restaurants that is participating in the outdoor dining that is being offered by restaurants around the Downtown Square. The Board of Aldermen accepted $7,100 in new donations on Tuesday to help offset the cost of renting the parking spaces for each restaurant. (Jake Thompson/Oxford Eagle)

A handful more restaurants around the Oxford Square will be participating in outdoor dining.

On Tuesday, the Board of Aldermen held a special meeting to approved five new licenses to Oxford Grillehouse, Proud Larry’s, SoLa, The Blind Pig and The Library.

The outdoor dining will begin potentially this weekend as the outdoor areas have begun to be mapped out around the Square with bicycle racks and ramps being installed by each participating restaurant.

“We know it’s an inconvenience to some of our other businesses,” Mayor Robyn Tannehill said. “But we know by bringing in extra people to dine means having extra people walking around and going into our shops.”

During the meeting, Oxford’s chief operating officer, Bart Robinson informed the Board that City Grocery and Square Pizza were opting out of the outdoor dining. Robinson said Square Pizza may enter back in later into the three-month period.

The Board also voted to accept $7,100 in donations from Oxford residents to help offset the cost of renting the parking spaces for restaurants.

Last week, First National Bank donated $3,000 to help cover some of the first month. The City has now accepted a total of $10,100 towards the leased parking spots.

“We appreciate these very generous donors who have stepped up to the plate to help our restaurants,” Tannehill said.

The city cannot donate the parking spaces since they are considered  public property. Because of that, they had the spaces appraised by two independent companies and the average of both appraisals valued each space at around $192 per month. That means restaurants will have to pay around just under $390 a month, plus a one time fee of $150 to cover the costs associated with creating their outdoor dining space.

Any further donations the city receives will further offset those costs.