LCDF Members are on State Task Force for Emergency Response 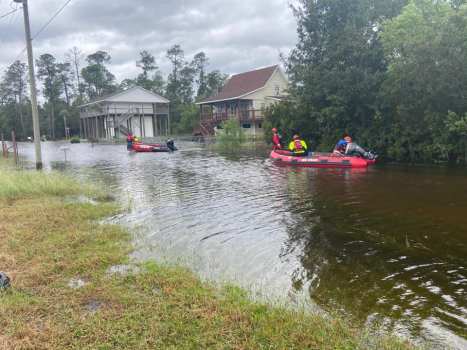 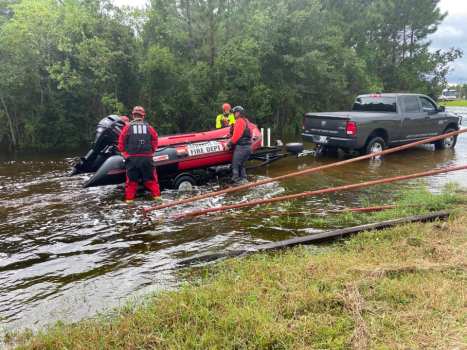 For Hurricanes Laura and Sally, Task Force 1 members were prepared and positioned to do swift water rescues. They also assisted in ground search and rescue operations, going door to door after the storm to look for trapped residents. During Hurricane Laura, a team of five members was also inserted via helicopter so they could begin giving help before the area was accessible by water or land, according to officials.

Task Force 1 is comprised of about 75 fire responders from 10 northern Mississippi counties.  Created through the Mississippi Department of Homeland Security (MDHS), local fire departments provide members to the state’s three regional all-hazard response teams. Members of the LCFD volunteer for service, explained Wood.  Task Force 2 is comprised of members from departments in the center of the state, while Task Force 3’s members belong to departments along the southern, coastal region.

Not only do responders bring this specialized training back to their local departments, which helps them respond to local events, but the Task Force provides a network of highly-skilled manpower and equipment that can be deployed quickly to help in any situation, anywhere in Mississippi.

Created in the wake of the 9/11 terrorist attacks the task force system really started picking up steam in the wake of the devastation wrought by Hurricane Katrina, said Ben McMinn, the Deputy Task Force 1 Leader and Desoto County Emergency Services Division Chief. He explained, “The state is small in terms of resources. If a local agency has something they can’t mitigate we are called to come and assist. We have equipment strategically placed throughout the area and state. Our personnel will come together and deploy.”

The system is not only utilized for large scale disasters – they are called for much more localized events like a missing person or to use their equipment to help clean up smaller, more localized storm damage, he said. “When they need us in their worst time, we want to have the training and equipment to help them,” said McMinn. “That’s why we do what we do, to ensure when a call for assistance that comes in that can’t be mitigated on the local level. That there is someone in that community to perform that rescue and save that life.”

“Our funding and our training come from the MDHS but our backbone is the local responding agencies and the city and county governments that are willing to provide those responders as part of that team, when called upon by the state. We are overly thankful for that support. They are what helps us maintain a successful urban search and rescue task force,” added McMinn.

MS Task Force 1 members have responded to an increasing number of high-profile incidents in recent years.  In addition, the 2020 deployments, members have been deployed “to almost every hurricane and events in the south,” id McMinn. Task Force 1 has worked in Florida three times in those years for Hurricane Michael, Irma, and Dora. They traveled to Virginia for Hurricane Florence. Other responses have included doing search and recovery work following the KC-130 plane crash in 2017 that killed 15 U.S. Marines and U.S. Navy Sailor. Members were also called out to assist in rescuing paratroopers who were dangling from trees following a training accident at Camp Shelby Army Air Base in 2019.