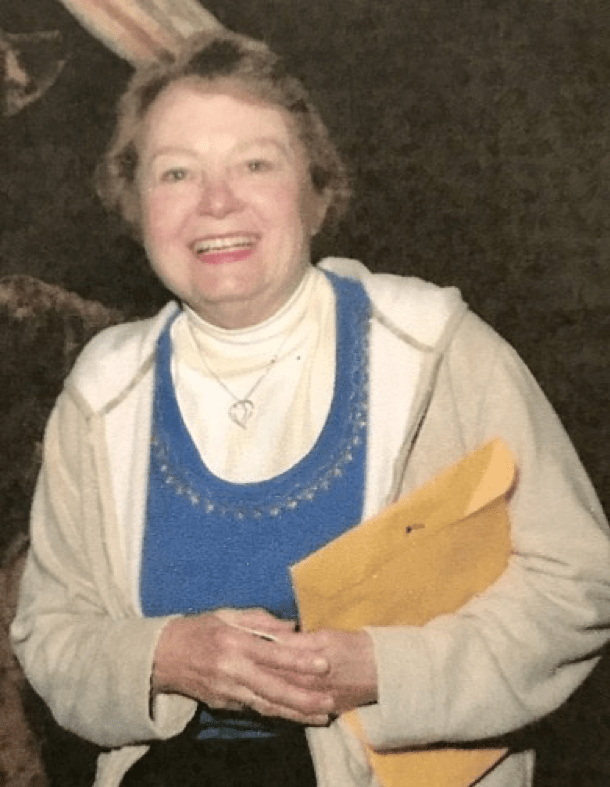 Muriel S. Hughes, 83, passed away at her home on Silver Lake, N.H. on Sept. 16, 2020, from pancreatic cancer.  She was the daughter of the late Richard and Edna Stimpson of Arlington Heights, Mass.  She was born in 1936 in Medford, Mass., grew up in Arlington Heights, and graduated from Arlington Massachusetts High School.

She attended the University of New Hampshire achieving Deans List and Honor Society.  She transferred to Boston University earning her Bachelor of Science Degree in Business Administration. Following her husband, Ken’s FBI career and transfers, she earned a Master’s degree with honors in Library Science from the University of Mississippi in 1972.  She was also very proud to become a master gardener after a year of study. She was employed at U.S. Steel in the Office of Public Relations in the late 1950’s and then by the Mississippi Judicial College in the Court Education program at the University of Mississippi School of Law.

She was the graphic artist for the college preparing programs and exhibits used for training state court judges, prosecutors, court personnel, and 6000 state bar members.  She was the editor of the Law School Alumni Newsletter and “The Jurist” for state judges and court personnel. She also worked part-time as the secretary to Professor Emeritus Noah “Soggy” Sweat Jr., a former circuit judge and active speaker, who was known for his “Whiskey Speech,” typed and proofed manuscripts for publication.

Muriel loved to garden, was a member of the Madison Garden Club, organized trips for the club, and for a period of time, did the flowers that lined the entrance of the Madison Town Hall.  Muriel was also a great cook. She and with her partner, Marilyn Murdock, ran the 5 yearly Madison Church suppers by buying and cooking the food.  She was known for her gravy she made from scratch for turkey, chicken, and pot roast dinners.  Muriel loved to read, play cribbage, and root for her Patriot football team wearing her team colors every game.  She was a Deacon and a Trustee of the Madison Church.

She is survived by her husband of 61 years, Ken Hughes Sr.; her sons, Ken, Jr. and Richard and their spouses, Ginger and Nicole; and four granddaughters Holly, Heather, Katie, and Alyson.

A memorial service will be held in the tent behind the Madison Church, 53 Conway Road, Madison, NH on Friday, October 2, 2020, at 2 p.m. Burial will follow the memorial service at Gilman’s Cemetery on East Madison Road.  Lord Funeral home of Wolfeboro, N.H. is in charge of arrangements, www.lordfuneralhome.com.

To send flowers to the family or plant a tree in memory of Muriel (Stimpson) Hughes, please visit our floral store.