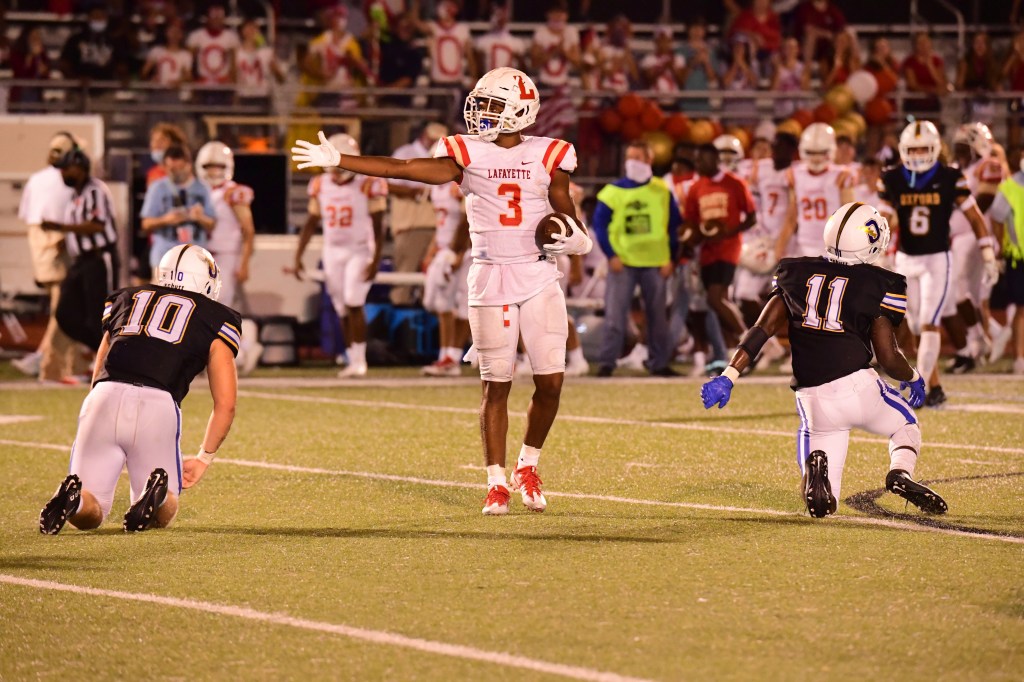 Lafayette’s Kylen Vaughn (3) signals a first down against Oxford at Bobby Holcomb Field on Friday, Sept. 11, 2020. The Commodores play their first home game of the season on Friday. (Joey Brent)

We have reached the midway point of the football season and teams are now playing the games that matter in terms of punching their ticket to the postseason.

Region play is underway for everyone with Water Valley starting 2-3A play at Byhalia this week while Oxford and Lafayette enter their second week of their region schedule.

For the first time this season, Lafayette is playing in a familiar environment.

The Commodores (2-2, 0-1 1-5A) host Grenada (2-1, 1-0) for their first home game of the year, and first of only two this season at William L. Buford Stadium. Friday night will be Homecoming for the Commodores.

Coming off yet another close game against West Point last Friday, where Lafayette fell short in a 21-15 loss, the Commodores are looking to bounce back and get into the win column as every game counts the rest of the season in a tough 1-5A region.

“We got beat by a really good football team on Friday night with chances to win in the second half after going down 21 points,” said Lafayette head coach Michael Fair. “So, we’ve got a lot of things that we’re looking at in a positive light. Of course, that outcome is not one of them, but we feel like we’ve got the football team in this room right here to make a run at this thing. I think our kids believe it, which is more important than me saying it.”

The Commodores welcome a Chargers team that opened region play last week with a 38-11 win over Saltillo. It was the first game back for Grenada, who had to cancel their Sept. 18 game at Tupelo due to COVID-19.

When these two teams have met on the field the past year years, the games have been decided by a combined nine points. The Commodores have come away with the victory both years, defeating the Chargers 24-21 at Grenada last season.

It may not be how they would prefer to do it, but Oxford managed to keep one of the state’s longest active winning streaks alive last Friday by mounting a historic comeback.

The Chargers opened up defense of their 1-6A crown at Southaven and mounted a 20-point comeback in the second half to escape with a 31-28 win. The victory extended the Chargers’ winning streak to 16 games, dating back to Sept. 6, 2019.

Oxford (3-0, 1-0) returns home to host Lewisburg on Friday for Homecoming.

The Patriots (2-2, 0-1) are coming off a 41-13 loss against Horn Lake last week to open their region slate. This is Lewisburg’s second season in Class 6A after moving up from 5A two years ago following reclassification. In their first region matchup with Oxford last year, the Chargers came away with the 21-3 victory.

The first season, which is what Embry refers to non-region play as, ended last week with the Blue Devils falling to a tough Winona team. Due to the Mississippi High School Activities Association shorting the football season by two weeks due to COVID-19 and the entire team being under quarantine the final two weeks of preseason camp, Water Valley did not get as many tune-up games as they normally would have during a more normal season.

After spending two weeks at home, the Blue Devils (1-2) return to the road and head to Byhalia as their region slate begins. This is the second year in Class 3A for the Indians (0-2), who moved down from 4A during reclassification two years ago.