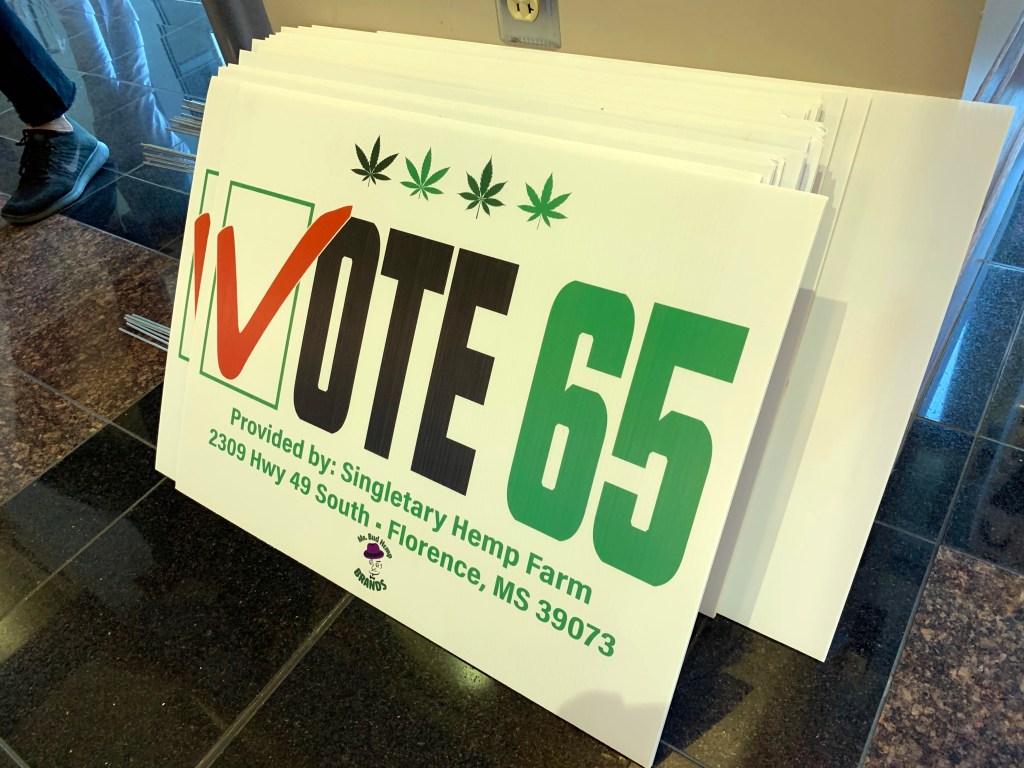 A campaign sign in favor of Initiative 65 sits in the lobby of the Gertrude C. Ford Center for the Performing Arts on the University of Mississippi campus on Wednesday, Sept. 30, 2020. The first of five public hearings on the medical marijuana issue were held at Ole Miss. Four more will take place in the other Mississippi Congressional districts. (Jake Thompson/Oxford Eagle)

With five weeks remaining until Mississippi voters head to the polls to vote on several issues, the issue of legalizing marijuana for medicinal purposes was debated in Oxford on Wednesday.

The University of Mississippi hosted the first of five public hearings on Initiative 65 at the Gertrude C. Ford Center for the Performing Arts. Mississippi Secretary of State Michael Watson is holding the hearings that will take place in all five Congressional Districts throughout October.

Proponents for and against Initiative 65, the citizen-created initiative that would make medical marijuana legal in Mississippi, and the Mississippi Congress-created Initiative 65A, spoke during the first portion of the hearing.

Four speakers participated during Wednesday’s forum. Two spoke on Initiative 65 and two spoke on the alternative option. Those speakers were Cody Weaver, a US Navy veteran; Jim Perry, a member of the Mississippi Board of Health; Lafayette County Sheriff Joey East and Jamie Grantham, communications director for the Medical Marijuana 2020 campaign.

Weaver and Perry debated the pros and cons of Initiative 65, which garnered over 80,000 signatures on a petition to help get it on the Nov. 3 ballot.

A small businesses owner in Saltillo, Weaver spoke about the positive effects medical marijuana would have in helping veterans dealing with post traumatic stress disorder (PTSD). The veteran referenced Ronnie McNutt, a New Albany veteran who livestreamed his own suicide on Facebook Live on Aug. 31, and if things would have turned out differently for the 33-year-old if marijuana were already legal in Mississippi.

“We have an opportunity this November to extend a hand to some of these suffering veterans by supporting Initiative 65,” Weaver said. “None of us may know what would have happened to Ronnie McNutt if medical marijuana had been an option for him, but I can tell you is that for other veterans it has made a tremendous difference.”

Following Weaver, Perry spoke in opposition of Initiative 65. The former deputy chief of staff for Governor Haley Barbour, was sworn in as a member of the Mississippi State Board of Health in 2019.

When speaking against the Initiative, Perry referenced the tax structure included in the proposed amendment to the Mississippi Constitution, or lack of tax money that will go back to funding infrastructure or other statewide needs.

Last week, East joined Oxford’s chief of police, Jeff McCutchen in speaking out against Initiative 65. A week later, the sheriff was still in opposition of either version of the Initiative passing, but spoke in favor of 65A. East also doubled-down on his feelings towards marijuana becoming legalized, even for medicinal purposes.

“I was asked to come here and speak tonight about Initiative 65A and I have to tell you and be honest with you, I was very hesitant in doing that,” East said. “The reason I was hesitant is for the last 30 years I’ve been in law enforcement and I’ve not seen once that the use of marijuana has have positive effects in a person’s life. Quite frankly, I’ve seen the opposite. It’s only brought addiction, misery, risk and pain to the families and individuals who use this drug. But after consideration of the thought that there is a possible need for medical marijuana or that there are people possibly hurting with chronic illness or pain, I decided to speak for Initiative 65A, but more importantly against Initiative 65.”

Grantham spoke against 65A, calling it a “Trojan horse” created by Mississippi legislators in an attempt to confuse the voters. She also referenced the decades the state Congress have had to pass legislature similar to 65A, if they wanted to.

“They have blocked every single one. Not a single one of those bills made it to the floor for a vote,” Grantham said. “When they put 65A on the ballot, they robbed voters of a fair up or down vote.”

Once the scheduled speakers finished, there was a small intermission before the public comment portion of the hearing began. Prior to the event beginning, those in attendance had the ability to sign up to give their opinion either for or against the Initiatives.

Eight people spoke, ranging from former lawyers to doctors, surgeons and small business owners. All eight were in favor of Initiative 65 passing next month.

Dressed in his white coat, Tupelo physician and surgeon Dr. Matt Wesson said he’d witnessed the positive effects medical marijuana can have on a patient and has been a strong supporter for it’s legalization in Mississippi for decades.

“With many patients, medical marijuana is excellent for cancer, pain relief, seizures, the side effects of chemotherapy … and for the anxiety of depression of PTSD that so many veterans have,” Wesson said. “It is a very unique drug with substantial benefits and minimal side effects.”

David Singletary, a Jackson native for the past 60 years, spoke strongly in favor of Initiative 65, stating marijuana had been been a part of “civilization for the past 10,000 years” and stated it was safer than other vices that are already legal, including cigarettes and alcohol.

The second hearing was held at Leflore County Civic Center in Greenwood on Thursday. The remaining hearings are scheduled for Oct. 7 at the Jackie Dole Sherrill Community Center in Hattiesburg; Oct. 8 at the Meridian City Hall Auditorium in Meridian and Oct. 13 at the Mississippi Civil Rights Museum in Jackson.