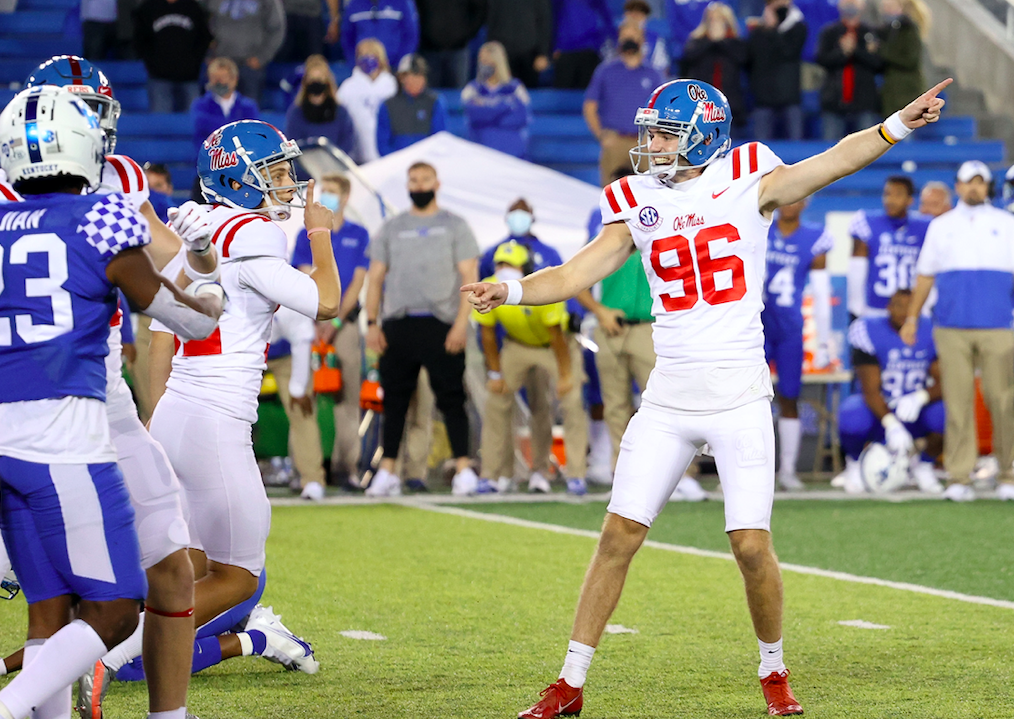 Luke Logan may not think about the ending to last year’s Egg Bowl with the missed extra point, but it still lingers. On Saturday, Logan was able to begin the exorcism of that demon with his game-winning extra point attempt to give Ole Miss the 42-41 win over Kentucky.

What made the ending even more fitting was the person who set up the winning try for Logan was none other than Elijah Moore, who hauled in a three-yard pass from Matt Corral.  The irony is that Logan was able to rejoice after Kentucky kicker Matt Ruffolo missed his extra-point attempt a possession earlier.

The win marked the first Southeastern Conference victory under first-year head coach Lane Kiffin, and first SEC win for Ole Miss (1-1) in nearly a full calendar year. The last conference win for the Rebels came against Vanderbilt on Oct. 5, 2019.

“Crazy game. To be down like that and to come back, go to overtime, just a really crazy game,” Kiffin said. “It was just great to see our kids battle back. We didn’t play great in a lot of areas. We stuttered on offense for a while and we obviously didn’t stop the run. At the end of the day, you’ve just got to score more than they do.”

For a second straight week the offense churned out numbers and points, specifically in the second half. The Rebels had 459 total yards of offense, with the majority of it coming from Corral’s arm once again.

Trailing 28-14, Rebels scored 21 unanswered across the third and fourth quarter and outscored the Wildcats (0-2) 28-14 the final 24 minutes-plus of the game.

For the second straight game, Corral threw for over 300 yards. The sophomore completed 24 of 29 pass attempts for 350 yards and four touchdowns.

The biggest benefactor of Corral’s play on Saturday was Jonathan Mingo. The sophomore wide out had his breakout game against the Wildcats, catching eight passes for 122 yards and two touchdowns. All three were career highs for Mingo.

“Based on the plays we were calling in fall camp, we knew (the offense was) going to kind of be explosive,” Mingo said. “I wasn’t really surprised that the offense got to clicking this fast. …Just trying to help my team win, putting up numbers. Everybody’s trying to catch a balls, just trying to go out there and have fun.”

The start of the game was a nightmare for the Rebel defense, which gave up 559 total yards to the Kentucky offense. The run defense was porous, allowing Kentucky quarterback Terry Wilson and running backs Chris Rodriguez and A.J. Rose to rush for a combined 379 of the Wildcats’ 408 yards on the ground.

Things began to turn in the second half when the defense began to fill the holes Kentucky players were finding. A key play came in the fourth quarter when Wilson took a sack on a 4 & 8 from mid field. MoMo Sanogo broke through the Kentucky front to get to Wilson and get the ball back for his offense.

It was a nice moment for Sanogo, who was flagged for roughing the pass when he sacked Florida’s Kyle Trask during last week’s game.

Ole Miss now turns its attentions to No. 2 Alabama as Kiffin welcomes Nick Saban back to Vaught-Hemingway Stadium. Game is scheduled for a 5 p.m. kickoff on ESPN.