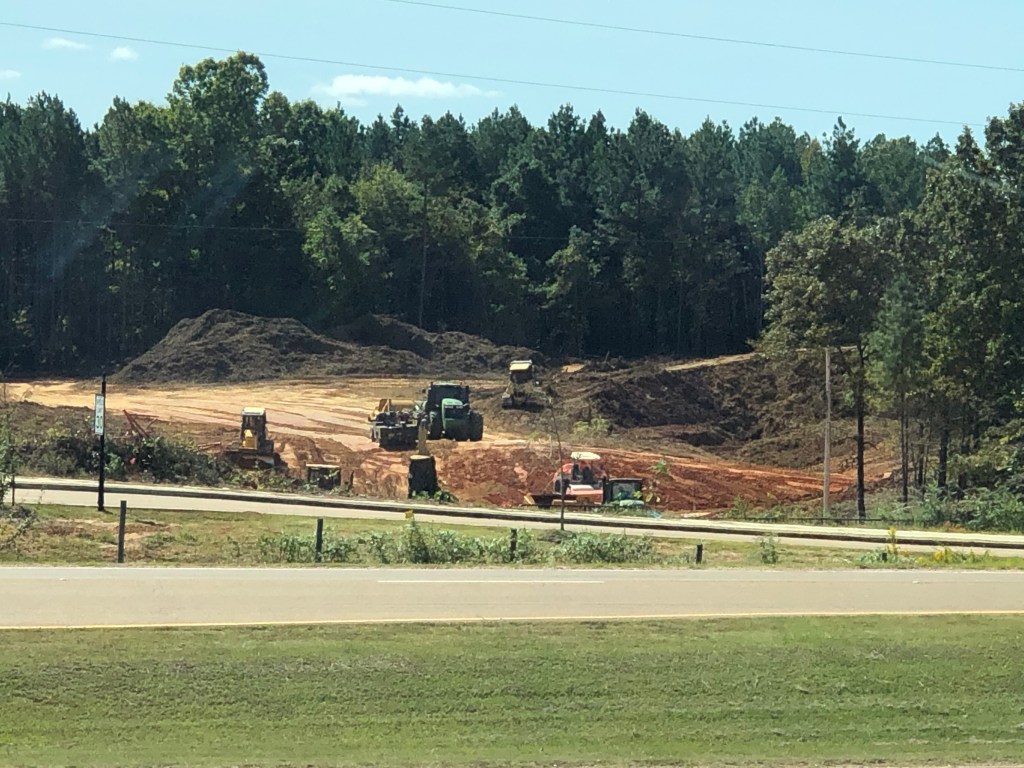 Construction of a Tractor Supply Company location at The Summit at Oxford Commons is underway.  Dirt is moving and trees are coming down at the roughly three-acre site, which is located along Ed Perry Boulevard just off Hwy. 30 between the Jehovah Witness Kingdom Hall and ABC Learning Center.

The national retailer specializes in “addressing the needs of the Out Here Lifestyle,” according to its website, offering an “extensive mix of products necessary to care for home, land, pets and animals with a focus on product localization, exclusive brands and legendary customer.”

The Tractor Supply Co. is the most recent business to be announced at the site, which has several remaining sites available for phase one development. A long-awaited Oxford outpost of The Waffle House, announced earlier this year, is also slated to be constructed as part of the first phase of development but work has yet to begin on it. It is unclear when that will occur.

City of Oxford’s Director Planning Ben Requet said he believes the new store will be a “catalyst for sustained development,” in the area, noting “this style of commercial development was planned along that corridor. I’m sure we will see some additional development as result of this,” noting, “At this time, we don’t have anything that has been submitted.”

Gill Properties Vice President of Brokerage Frank Dyer said Thursday that although he could not make any announcements at this time but news about future development at the site is coming. “We are working on a few things,” he said, noting interest in the development has continued to be strong despite the nation’s economic downturn. Dyer works closely with the site’s developer David Blackburn, founder of The Blackburn Group. Blackburn could not be reached at press time.

The new Tractor Supply Company store will contain approximately 19,000 square-feet of indoor retail space and a 14,300 square-foot outdoor display area on the east side of the store that will be fenced and screened. The architectural design of the single-story store “is attractive,” and will feature a stucco and glass store front, while the west side of the building will contain windows with an aluminum awning and goose neck lighting above, according to a report compiled Requet and available through the city’s website.

There will be 62 parking spots for the retailer and large canopy trees will be planted in the parking lot to provide maximum tree coverage.  As part of a 2015 Tree Mitigation Variance Agreement between the Oxford Planning Commission and the site’s owner, 14 percent of the site will be placed into a recorded conservation easement.

A monument sign for The Summit will be erected at the northeast corner of the lot and will likely advertise other businesses in the development, according to the report. A roadway along the west side of the property will connect it to future retail developments planned for the area.

Tractor Supply Co. was founded in 1938 as a mail-order tractor parts supplier. Its first retail store opened in 1939 in Minot, North Dakota. The company is now headquartered in Brentwood, Tennessee and is a publicly traded company on the NASDAQ stock exchange, where it is listed as (TSCO). It reported revenues exceeding $8 billion in 2019, and employs more than 38,000 individuals. According to its website, Tractor Supply operates 1,881 stores in 49 states as of June 27, 2020. Tractor Supply Co. also owns Petsense LLC, a pet supply retailer that operates small-box stores in mid and small communities. It was founded in 2005 and acquired by Tractor Supply in 2016.