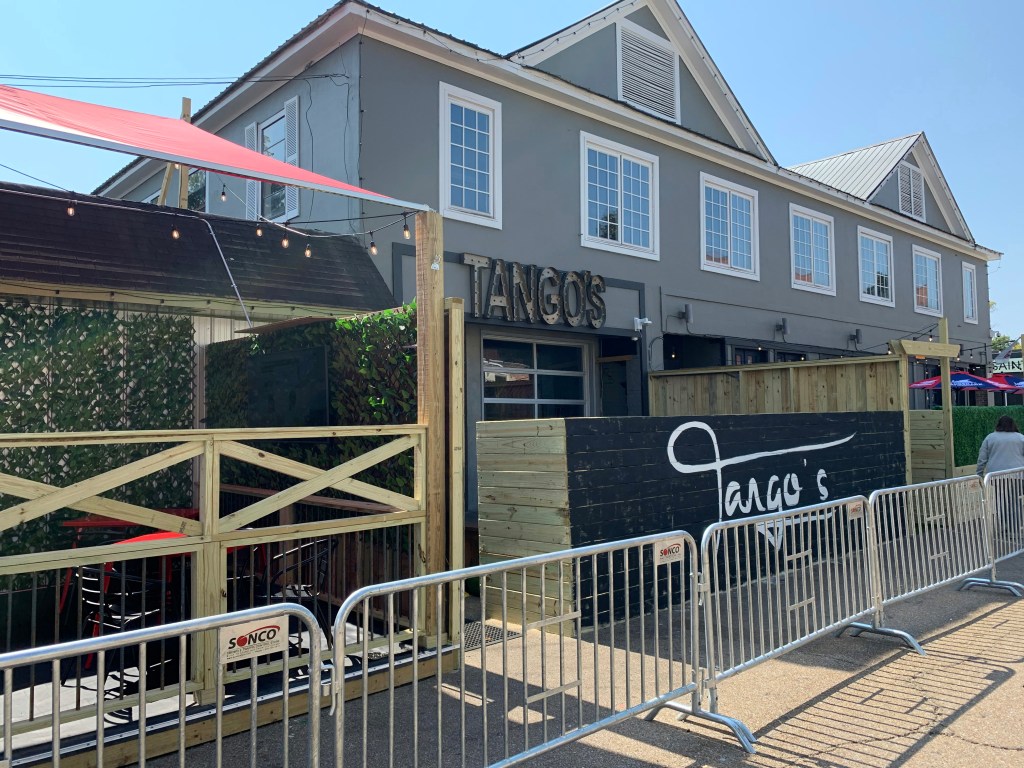 Tango’s located at Jackson Avenue on the Downtown Square had their request to expand their outdoor dining lincense to include all week approved by the Board of Aldermen during their regular meeting on Tuesday, Oct. 6, 2020. The Board approved more outdoor dining requests during the meeting, bringing the total number of restaurants participating to 18. (Jake Thompson/Oxford Eagle)

Extended alcohol sales on Sundays will not be coming to Oxford anytime soon.

With Governor Tate Reeves’ latest executive order, restaurants and bars must close at 11 p.m. as part of the state’s COVID-19 protocols and restrictions.

“With restaurants and bars currently closing at 11 p.m. during the week, giving them two more hours on Sunday would give them an advantage and with the increased popularity of Sunday Night Football and other athletic events, it would generate some income for them,” Huelse said.

The remaining Aldermen were hesitant to extend service hours on Sundays, citing the need to allow officers with the Oxford Police Department a night off of patrolling the Downtown Square.

Alderman Janice Antonow noted she was in favor of the Sunday alcohol sales ordinance in 2014, referencing the rationale that people visit Oxford on weekends and like to have drinks with their brunch. Antonow was hesitant to allow restaurants to remain open two extra hours on Sunday night, even if it was for the duration of Reeves’ executive order, as it could be a case of not being able to get back to where they were before the change.

“The alcohol hours have never been reduced in this city,” Antonow said. “Every time we’ve increased them they stayed that way, and I imagine this would be the same way. At this time when we’re trying to keep people indoors as much as possible, extending bar hours for two more hours, even though some people would be outside, some people would still be inside. It just doesn’t make sense. …I think it’s kind of a step backwards for the culture of Oxford.”

Currently, OPD does not have a Square detail assigned for Sunday nights. That would require OPD chief McCutchen to either hire more officers or ask his current officers to work another night.

McCutchen was not concerned with being able to cover the Square another night, but agreed it would be hard to go back after residents have grown accustomed to having another night to stay on the Square late.

“Patrol can handle it now, but down the road in six months as it becomes a culture, we’d have to find coverage there and increases when we have to bring our DUI officers out,” McCutchen said. “It would have a significant impact eventually.’

The Board voted 5-1 to table the idea and not go forward with a second reading on the proposed ordinance change. Huelse was the dissenting vote. Morgan was not present at the meeting.

The Board also approved three more outdoor dining licenses for Downtown Square restaurants during their meeting on Tuesday.

Bourè, Oxford Burger Company and Mesquite Chop House had their licenses approved, bringing the current total of restaurants participating in the outdoor dining to 18.

The outdoor dining will run through Dec. 31, unless the Board votes to end it sooner due to any issues that may arise.

“Absolutely it’s been a success,” Mayor Robyn Tannehill said of the outdoor dining. “I’ve talked to numerous business owners and managers that have said their sales have greatly increased and that they are thrilled to be able serve customers in a safer environment. …We have not had a lot to be excited about lately and this has been such a breath of fresh air. To see people excited and energized about getting out in a safe way and seeing people be out socializing in a safe way has been very encouraging.”

Tango’s also had their license expanded to include all week, instead of just offering the outdoor dining on the weekends.

Portion of North 6th Street to close temporarily during…