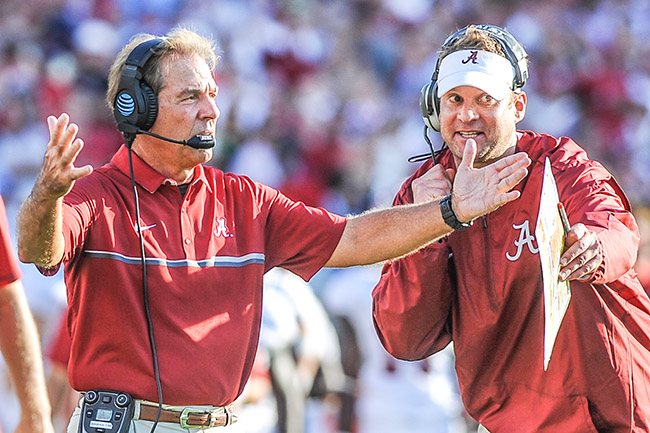 Lane Kiffin may say there is not an advantage or that it does not mean anything, but an Ole Miss win over No. 2 Alabama on Saturday would break a streak as long as Arkansas’ most recent winless run against Southeastern Conference opponents.

Former assistant coaches under Nick Saban who leave from under the coaching tree in Tuscaloosa to take over a program elsewhere are currently 0-20 when playing their former boss.

Many have tried, and failed, but no other coaching matchup between master and apprentice has been more anticipated than Kiffin versus Saban.

The first-year Rebel coach does not put much stock into all the hype that has been built around Saturday night’s game between two people who will not even leave the sidelines.

Kiffin spent three seasons at Alabama under Saban. Two of those seasons saw the Rebels defeat the Crimson Tide in back-to-back years.

“All of these people who say its an advantage because I worked with him, I don’t really understand that, because he’s 20-0 against coaches that worked for him,” Kiffin said earlier this week. “If you working for him gives you an advantage, you’re not a very good gambler if that’s what you say, because 20-0 is a pretty strong record.”

There is plenty of attention surrounding Kiffin and Saban this week, both coaches even going on national radio shows to discusses Saturday’s game, but there are still two football teams who will have the final say in what the scoreboard shows.

With Hurricane Delta crashing into the Gulf Coast and forecasted to move up Mississippi on Saturday, the SEC moved the game back 90 minutes to a 6:30 p.m. CT kickoff.

A rain-soaked field levels things when it comes to the Rebels’ passing game, which is one of the best in the SEC and the nation through two weeks. The Alabama running game may still hold a firm advantage over an Ole Miss run defense that has been anything but stringent through two games.

Ole Miss (1-1) and Alabama have the fourth and fifth best passing offenses in the country, averaging 381 and 369 yards, respectively. The air attack may be null and void depending on what kind of punch Delta still has when it reaches Oxford on Saturday.

The Rebels’ defense is currently giving up 302 rushing yards per game. Last week, they allowed Kentucky to have three 100-yard rushers in a game for the first time since 1996. The Crimson Tide (2-0) have not relied on their ground game much in the early portion of the season, averaging 110 rushing yards per game, but Saturday could be a different story in the rain, wind and mud.

“Pad leverage up front, playing too high, and tackling, a lot of missed tackles,” Kiffin said if his defense’s struggles early on. “If you don’t do those two things, you’re not going to stop the run. That’s our emphasis.”