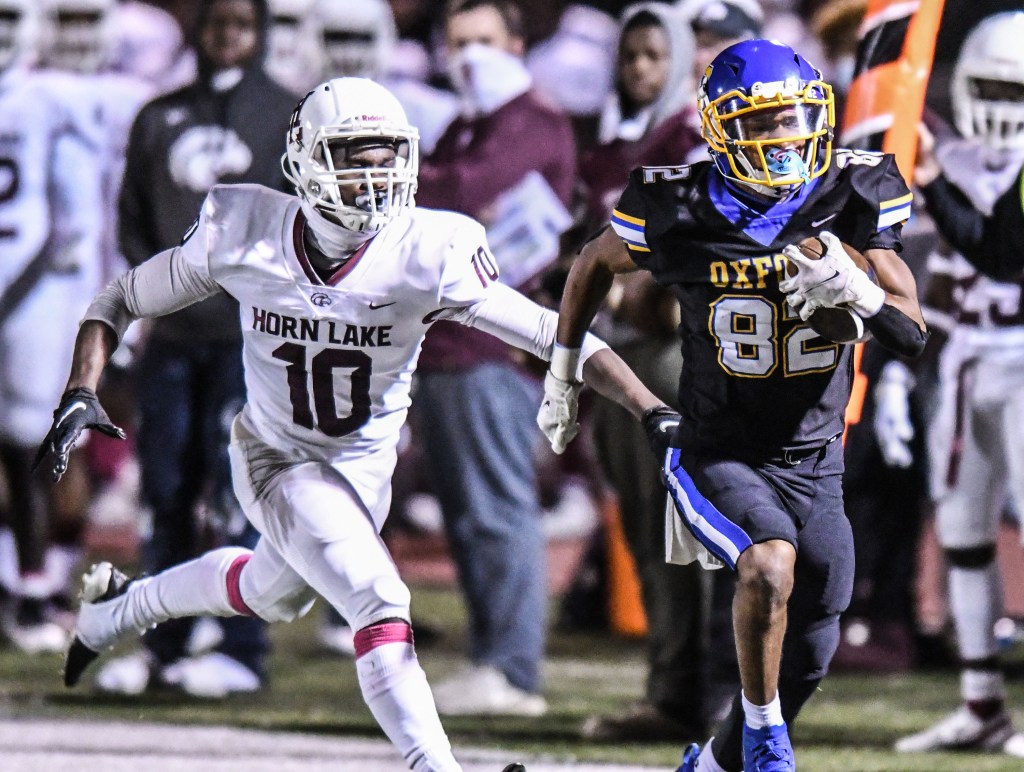 In a season full of uncertainty, there is one thing Oxford is certain of: they will get the opportunity to defend their Class 6A state championship.

The Chargers dominated Horn Lake in all phases for the 50-27 victory at Bobby Holcomb Field on Friday. The win clinched a berth into next month’s 6A playoffs and was the Chargers’ 19th straight victory, dating back to Sept. 6, 2019.

Friday’s game was also one where Oxford (6-0, 4-0 1-6A) was coming off a rare second bye week of the season. The Chargers game last week was canceled when DeSoto Central had to forfeit due to the program having a COVID-19 outbreak.

The extra week of rest did not bother the Chargers.

“We had a little bit of a challenge with our game getting canceled last week and we challenged the team to continue to improve and find a way to turn it into a positive and I think they showed tonight that they responded well,” said Oxford head coach Chris Cutcliffe. “Maybe initially when I found out we weren’t going to play I was a little worried. But the way we responded on the practice field, I was really pleased with that week and the way they handled it.”

There was very little Horn Lake (3-3, 3-1) could do to slow down the Charger offense, which scored on six of their first nine possessions.

Oxford found success both on the ground and through the air, providing a balanced attack that kept the Eagles off balance all night.

Jay Wortham had breakout game, hauling in three touchdown receptions in the first half. Wortham had touchdown grabs for 56, 40 and 23 yards-long.

“Jay is proving to be a huge play maker. There’s not doubt about it,” Cutcliffe said. “I think we’ve done a good job of being balanced in the passing game and had a lot of guys stepping up and making plays.”

While the offense had one of its more complete games, Oxford’s defense stymied the Eagle offense, which never got anything going. Horn Lake fumbled the ball on multiple occasions and Oxford finally recovered one late in the second quarter which turned into Charger points two plays later.

Special teams started the game with a block punt on Horn Lake’s first possession of the night.

“We knew coming into the season we were replacing a bunch of people on defense and I think we’ve seen our team get better every time we’ve taken the field,” Cutcliffe said. “We got guys learning and growing and just continuing to improve.”

Oxford will stay home next week when they host Olive Branch on Friday. Kickoff is scheduled for 7 p.m.