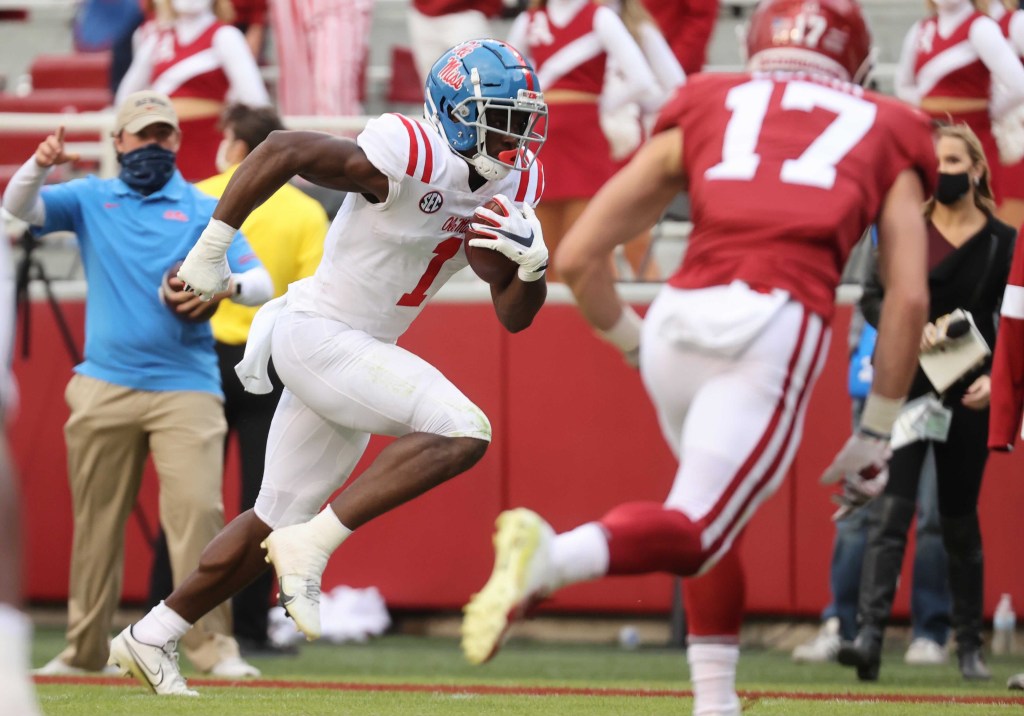 Jonathan Mingo (1) scores a touhdown against Arkanas at Donald W. Reynolds Razorback Stadium in Fayetteville, Ark. on Saturday, October 17, 2020. The Rebels’ offense struggled against the Razorbacks in their 33-21 loss (Joshua McCoy/Ole Miss Athletics)

FAYETTEVILLE, Ark. — Ole Miss has needed its offense to pitch a near perfect game every week to make up for its leaky defense, neither of those things happened on Saturday.

In their 33-21 loss to the Razorbacks, the Rebels had their worst performance on offense this season with a season-low 442 total yards of offense.

The offense looked to be off to another one of their fast starts, moving the ball and getting to the Arkansas 1-yard line before Matt Corral botched a handoff on a 4th and Goal that resulted in a recovered fumble by the Razorbacks. From there, the offense never found its rhythm.

Corral threw a career-high six interceptions, including one returned for a 36-yard touchdown by defensive back Jalen Catalon. The first interception was intended for Elijah Moore, but a swirling wind caused it to fall into the hands of cornerback Hudson Clark.

The second half, specifically the fourth quarter, was littered with turnovers by both teams. The Rebels had chances to get back into the game, including a chance to go down the field for a game-winning drive in the final four minutes trailing by five, but Corral’s interceptions killed the momentum every time. His six interceptions on Saturday is the most in a game by a Southeastern Quarterback in 14 years.

“I think the theme today was opposite what the season had been,” said Ole Miss head coach Lane Kiffin. “Offensive struggles. The inability to run the ball in the first half and obviously the turnovers. The two goal-to-go situations, getting no points out of that. There’s so many opportunities that you think, ‘Alright, the game became a one-score game in the fourth quarter. Had we not screwed all that up early, we’re up by three, four scores. You can’t turn the ball over like that and expect to win.”

A key piece of the Rebels offense was almost lost during he first drive of the game. Moore was hit in the head following a catch, causing him to leave the game. For most of the game, Moore was the sole reason the Rebels had a pulse with 113 yards and a touchdowns on 11 catches.

Jerrion Ealy finished with another 100-yard game, rushing for 112 yards and a touchdown on 23 carries. Snoop Connor was kept in check following his career game against Alabama a week ago. Connor rushed for 40 yards on 13 carries.

While the offense had a lackluster afternoon, the Rebels defense had its best performance of the season. Arkansas was limited to 394 total yards of offense, which is the lowest output allowed by the defense.

“To me, my message to team is it shows that we can be really good,” Kiffin said. “What if we play offense like we had prior to this game and play defense like to day?’ We’d be a really good team. That’ll be the goal, to put it all together.”

Ole Miss returns home next week to take on Auburn (2-20) who fell to South Carolina on the road on Saturday. Kickoff is set for 11 a.m. and will be broadcast on the SEC Network.