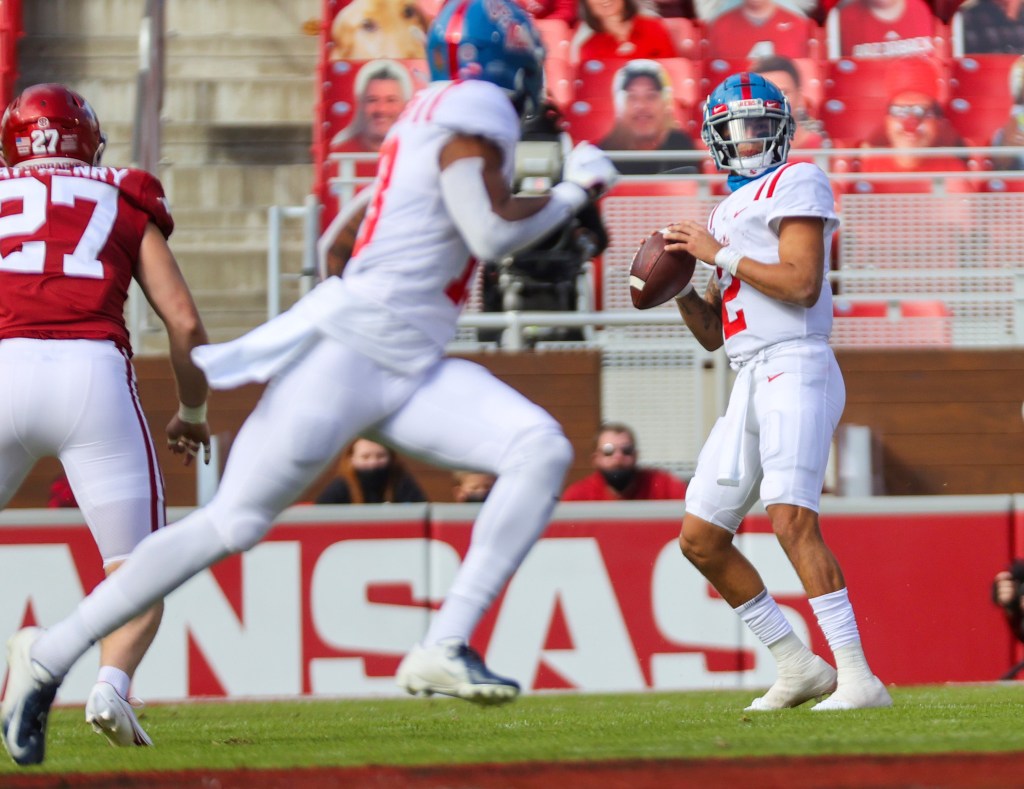 Matt Corral had his worst performance in an Ole Miss jersey at Arkansas on Saturday, and the quarterback is not putting the blame on anyone but himself.

The sophomore threw a career-high six interceptions and accounted for all seven Rebel turnovers. On the Rebels’ opening possession, Corral fumbled the ball away at the Arkansas one-yard line on 4th and Goal. The Razorbacks recovered and seemingly, the Ole Miss offense never did.

Saturday was a game for Corral and the Rebels to forget, but head coach Lane Kiffin said he does not want his quarterback to erase those three-plus hours in Fayetteville from his mind. What Corral and Kiffin called a “humbling” performance, Kiffin wants it to also be a learning experience.

“I said to (Corral), ‘This game can be really humbling,'” Kiffin said. “Got to be careful reading all your stuff during the week and how great you are, because it will bring you back down. Once you start playing really well, people, they study you and today they read his eyes and they played all zone. He was staring guys down and that’s where his interceptions came.”

Kiffin noted many of Corral’s interceptions later in the game at crucial moments came from him never taking his eyes off his receiver he was going to throw to. One key turnover came in the second quarter when Arkansas’s Jalen Catalon jumped a route and picked off a pass intended for Jonathan Mingo, returning it 35 yards for the touchdown.

In the second half, Corral looked lost with some interceptions, throwing a ball where it seemed only Razorback defenders were on the field. Trailing by 12 with three minutes left, Corral tried to force a ball to Elijah Moore, who had four defenders around him with an Arkansas player picking it off to ice the game.

“It was a unique look that (Arkansas) had,” Corral said. “They never had a loaded box once, so the run game numbers were good. We struggled with trying to get the run game going so we tried to throw it, and I knew they would drop eight (players). No excuses for that performance. When you have a performance like that, you’re supposed to lose the game, and that’s what happened.”

Entering Saturday, Corral had thrown just one interception which came against Florida in the season opener. He had been one of the more efficient quarterbacks in the Southeastern Conference and across the country this season prior to Saturday’s game.

There were some positives for Corral to fall back on when looking to move forward and turn the page. He finished the game with two touchdowns as the Rebels got back into the game in the later stages of the second half.

“Get back to work. Do what I did to get here,” Corral said of moving forward. “Watch more film. I obviously didn’t watch enough.”