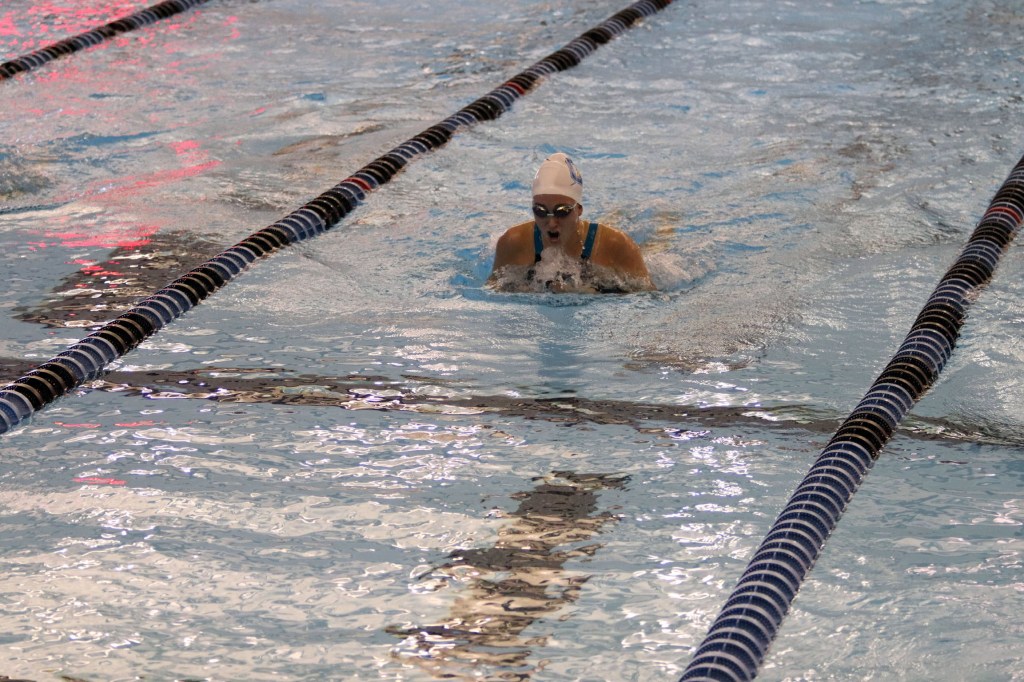 Oxford’s Hannah Harper competes during the 200-yard individual medley during the Class II North Half championship meet at the Tupelo Aquatics Center in Tupelo on Saturday, Oct. 17, 2020. The Lady Chargers finished second overall behind Madison Central. (Courtesy of Elizabeth Vaughn)

The high school swimming season will reach its conclusion this weekend with the Class II state championship meet in Tupelo.

Oxford’s girls team has a chance to have one of their better finishes in program history, coming off a runner-up in last weekend’s North Half meet for the first time since 2010. The Lady Chargers earned 117 points behind North Half champion Madison Central (146).

The Chargers’ boys swim team finished in third place with 75 points behind North Half champion Madison Central (124) and Tupelo (102).

“I was really pleased with the performance of our team Saturday and how we competed in the meet,” said Oxford swim coach Robert Gonzalez. “It was a mindset change for us to go out there and do what we did. However, now we have to be prepared to do it, again, and keep swimming with that intensity. I believe our team is primed for a big state meet day.”

Oxford had 20 swimmers qualify for Saturday’s state meet, which is the largest squad from Oxford to go to a state championship meet since the format changed to the top eight scoring in 2011.

The girls had top three finishes in all three relay races, with their best finish being first place in the 400-yard freestyle relay with the team of Ellinor Maxwell, Madeleine Gaia, Julia Dennis and Cole Oyler. The team of Hannah Harper, Maxwell, Gaia and Dennis took runner up in the 200-yard medley relay and the team of Emery Kate Schneider, Marley Elliott, Oyler and Harper finished third in the 200-yard freestyle relay.

On the boys side, Oxford had a third-place finish and a pair of fourth-place finishes in the relay events. The team of Thomas Dyminski, Max Griffith, Neil Cipkowski and Jacob Tulchinsky took third place in the 200-yard freestyle relay. Charles Byars, Gates Allen, Cipkowski and Tulchinksy finished fourth in the 400-yard freestyle relay while the team of William Berry, Byars, Dyminski and Griffith took fourth place in the 200-yard medley.