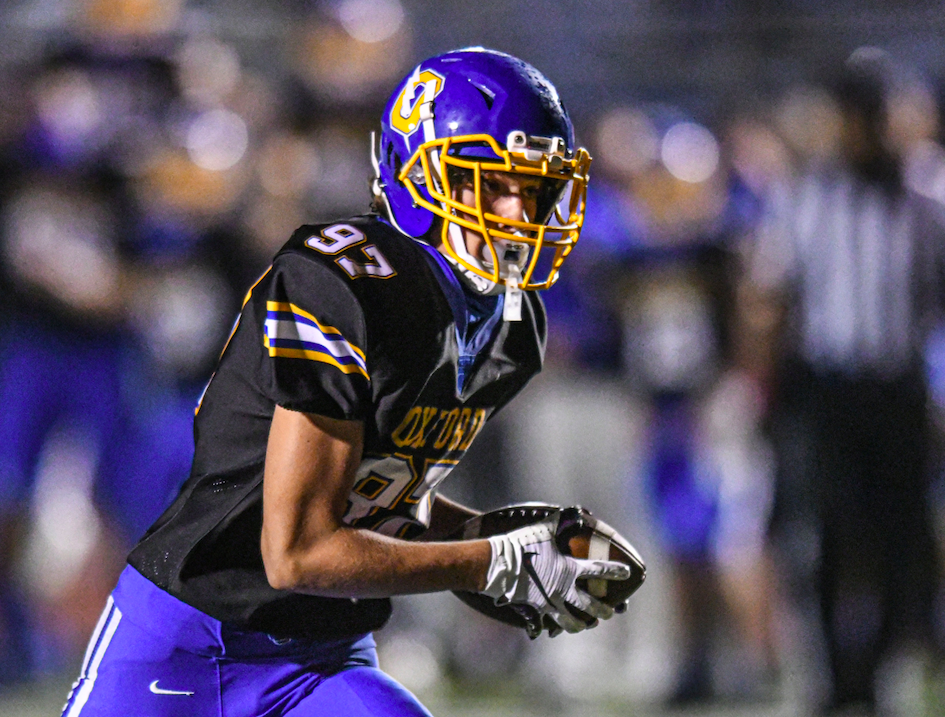 Oxford High’s Jack Harper (97) makes a catch and runs it in for a touchdown against Olive Branch in the first half at Bobby Holcomb Field in Oxford, Miss. on Friday, October 23, 2020. (Bruce Newman)

The Oxford Chargers continue to show they belong in Class 6A with another playoff berth clinched.

The Chargers (7-0) snuffed out the triple option and did just enough offensively to defeat the Olive Branch Conquistadors 39-0 at Bobby Holcomb Field on Friday. Oxford has now won 20 straight games dating back to September 2019 and still has not lost a region game since October 2018. Defensively, the Chargers pitched their first shutout of the season.

“It’s a huge challenge to defend them,” Oxford head coach Chris Cutcliffe said. “They do a lot of good things offensively and good at what they do. They are disciplined, so we had to tackle. I’m proud of how we played.”

After turning in one of the best offensive performances of the season last week against Horn Lake, the Chargers struggled early due to constant pressure on the line of scrimmage and Olive Branch forcing them behind schedule on most of their offensive drives.

“We had a few issues early by giving them free rushers to the quarterback,” Cutcliffe said. “We ran the ball well and made good passing plays in the second half when we needed to.”

It would take a little longer than Oxford wanted to getting on the field after Olive Branch began the game with an onside kick which they recovered near midfield. That was all to no avail as the Chargers held quarterback Ty Walton and the Conquistadors in check by forcing back-to-back turnovers on downs.

Late in the first quarter, Xavier Walton picked off a deep ball and returned it to the Olive Branch 40-yard line. The Chargers capitalized with Jack Tannehill connecting on a 25-yard field goal to give Oxford a 3-0 lead with 36 seconds left in the first quarter.

Midway through the second quarter, Alex Sanford sacked Ty Walton to force a fumble, which was recovered by Oxford’s Q Blake at the Olive Branch 42-yard line. Michael Harvey found recently added freshman Jack Harper all alone in the middle of the field for a 32-yard touchdown pass. Following a two-point conversion, the Chargers led 11-0 and kept it that way going into the locker room.

“We talked about coming out of halftime was huge,” Cutcliffe said. “We had to set the tone and did a tremendous job of that. We played fast and physical in the second half and I was proud of that.”

The Chargers continued to take advantage of turnovers in the second half. Xavier Walton’s second interception of the game was followed up with an Omar Howell touchdown on the goal line to give Oxford an 18-0 lead early in the third quarter. Olive Branch later found themselves inside the Charger 10-yard line, but Xavier Walton again denied any chance of points with a third interception.

Early in the fourth quarter, Trip Maxwell threw his first touchdown pass of the game when he found Trynten Brannon wide open for a 21-yard touchdown pass across the middle. That gave Oxford a 25-0 lead. From there, Tristan Shorter and Jamal Giles joined the turnover party with a pair of 60 yard pick-sixes.

“(Turnovers) the number one stat that determines wins and loses,” Cutcliffe said. “Xavier (Walton) did it tonight, Tristan Shorter has done it all year for us.”

Oxford will hit the road on October 30 to face the Hernando Tigers in a matchup of undefeated teams in Region 1-6A. Kickoff time is set for 7 p.m.