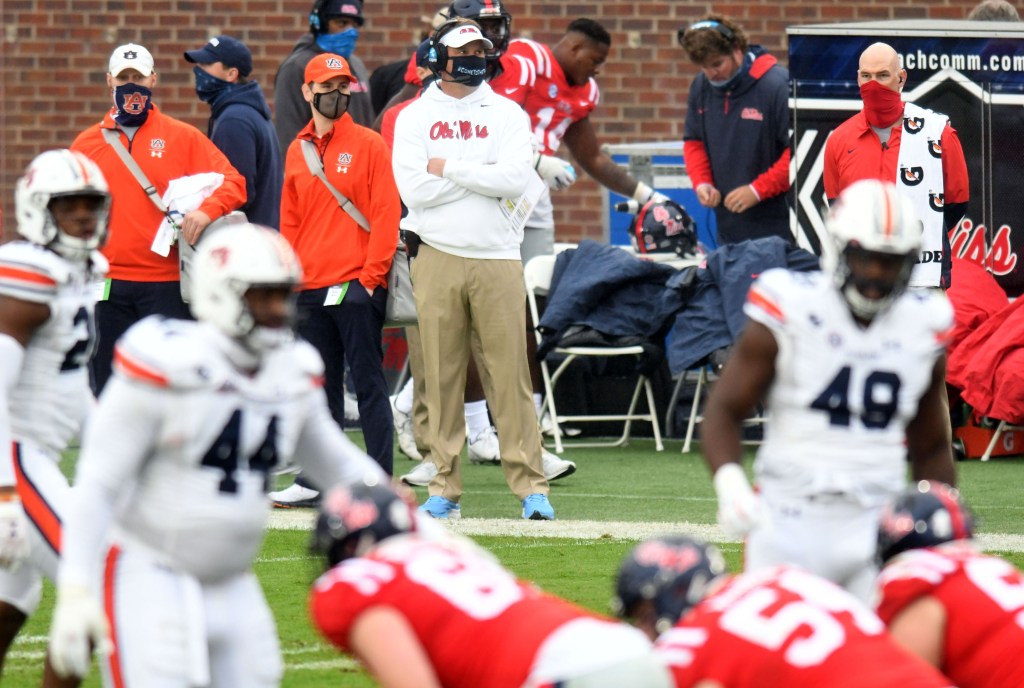 Ole Miss head coach Lane Kiffin watches the game against Auburn at Vaught-Hemingway Stadium in Oxford, Miss. on Saturday, October 24, 2020. Kiffin expressed his frustration following a call with the SEC office on Monday regarding the kickoff return play that appeared to be an Auburn fumble but was not reviewed.(Bruce Newman)

Much was said between Lane Kiffin and the Southeastern Conference office when the two spoke on the phone Monday, but very little can be repeated.

Kiffin was late to his regular Monday press conference due to speaking with the SEC’s coordinator of football officials, John McDaid, regarding the controversial kickoff play during Ole Miss’s game against Auburn on Saturday.

In the fourth quarter following a Jerrion Ealy touchdown, Auburn’s Shaun Shivers appeared to have touched the ball on the ensuing kickoff return and a Rebel jumped on the ball once it was in the end zone.

The Rebels felt that was a touchdown in their favor, giving them a potential 35-27 lead over the Tigers with just under six minutes left to play. Instead, the officials ruled Shivers never touched the ball and that it was a touchback, letting Auburn keep possession. The Tigers did not score on that drive, but did on their next possession to give them the 35-28 win.

Kiffin spoke with officials during the game and said he was told that they reviewed the play and it did not show Shivers touched the ball. The officials did not stop play to review it further.

On Monday, Kiffin further expressed his frustrations with how the play was handled on Saturday and his emotions were compounded following his phone call with McDaid in Birmingham, Ala.

When asked if he was going to present video to the SEC office, Kiffin let his feelings about the entire situation be known.

“I really wish for our players, our fans, that they could hear what I was just told,” Kiffin said of the phone call. “They deserve to, but I asked and they made sure to tell me there’s a policy that I can’t tell you, the players or the fans what their – if you want to call it an explanation of the situation was.

TV, everybody in the country could see it hit him, and I asked the side judge why aren’t they replaying it, do I need to challenge it, and he said, ‘They’ve already looked at it, there’s nothing there.’ So, I’m not allowed to say anything about the conversation, but I really wish our players and fans could hear what I was told. I had to take a five-minute power yoga class before I walked in here to say what I really wanted,” Kiffin said.

On Monday night, the SEC issued a statement regarding the play and announced a fine of $25,000 toward Kiffin for his social media activity following Saturday’s game.

“On the kickoff return in the Auburn at Ole Miss football game at 5:43 in the 4th quarter, the SEC has determined the replay official should have stopped the game for further review of the play,” the SEC’s statement read. “Because the play was not appropriately stopped for further review, the necessary slow-motion view of the play was not viewed by the replay official to determine if the ruling on the field should have been reversed.”

The result was a third-straight loss for the Rebels, who did have opportunities to still come away with the win following the kickoff play. For Auburn, it was the second time in the last three games they were saved by a call, or non-call, from the officials.

During their Oct. 10 game against Arkansas, quarterback Bo Nix looked to have fumbled the ball when the threw it behind him. Instead, the officials ruled it intentional grounding and not a fumble, saving the game for Auburn who won 30-28 on a last-second field goal.

Ole Miss (1-4) now turns their attention to winless Vanderbilt for a Halloween showdown in Nashville. Game is set to begin at approximately 3 p.m. CT on the SEC Network.