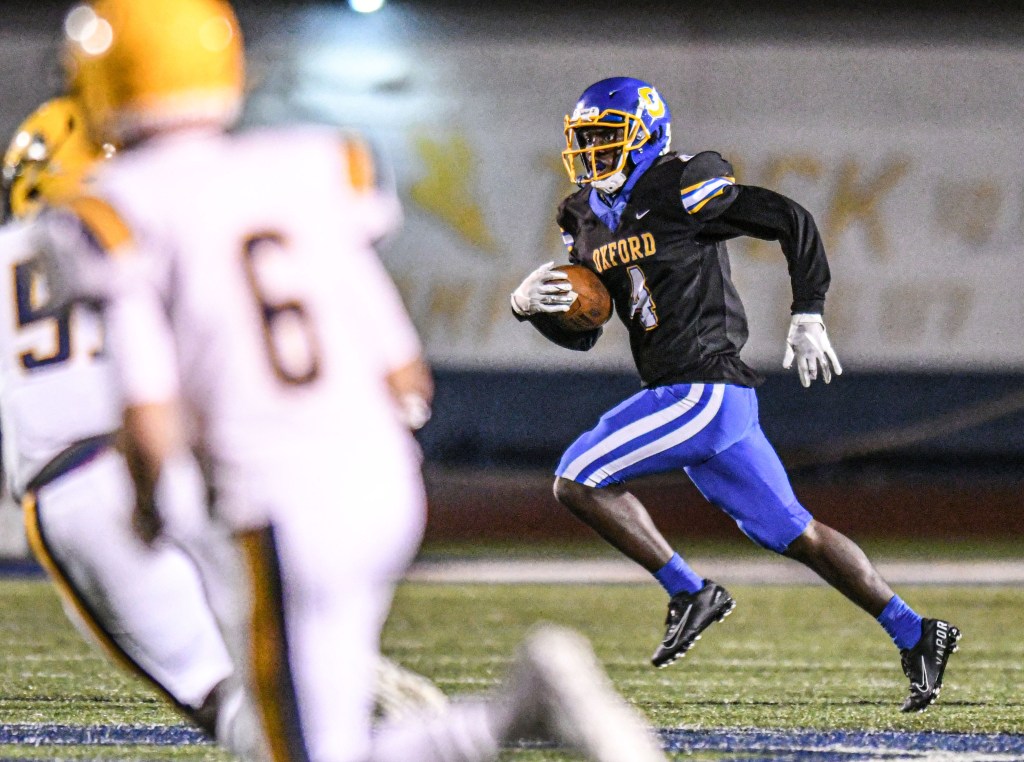 Oxford High defensive back Xavier Walton (4) intercepts a pass against Olive Branch in the first quarter at Bobby Holcomb Field in Oxford, Miss. on Friday, October 23, 2020. Oxford travels to Hernando on Friday with a chance to secure a first round home playoff game, and possibly a second consecutive region title. (Bruce Newman)

The regular season comes to a close for several teams this week, including Water Valley, while No. 2 Oxford and Lafayette have a couple more weeks to go.

With the regular season winding down and playoff berths secured for all three area teams, the task at hand for them is to now ensure they will not have to travel in the first round, or even clinch a region title.

Oxford took care of business against Olive Branch last week, putting themselves in firm control of their Region 1-6A destiny and beyond.

With their win, the Chargers (7-0) improved to 5-0 in region play and extended their overall win streak to 20 games. The victory also sets up a key showdown at Hernando this Friday.

The Chargers already have a win over Horn Lake and with a win on Friday, it would ensure they would finish no worse than second in the region and secure a home game in the first round of next month’s 6A playoffs.

“A huge end to the season,” said Oxford head coach Chris Cutcliffe. “Obviously one of our first goals coming into the season is to make the playoffs. The second part of that goal is to try and play a home game in the first round. That’s still out there in front of us.”

An Oxford win paired with a Tupelo loss against Horn Lake would secure a second-straight 1-6A title for the Chargers. If the Golden Wave wins, it sets up a region championship game at Oxford on Nov. 6.

Lafayette put themselves in position to achieve something they have yet to do since joining the Class 5A ranks, win a region title.

The Commodores’ victory at New Hope last week earned them their fourth-straight region win and kept them atop top the 1-5A standings with a 4-1 record.

With some help from Grenada, who defeated Lake Cormorant 12-10, Lafayette (6-2) are in firm control of their destiny in 1-5A if they can close out the regular season with wins. The Commodores are currently tied with the Chargers (5-2, 4-1) for first in the region, but their Oct. 2 win over Grenada gives them the tiebreaker advantage.

The Commodores stretch run begins on Friday with just their second home game of the season, hosting Columbus (1-7, 1-4). If Lafayette can take care of business against the Falcons, then a win at Lake Cormorant on Nov. 6 will give them their first 1-5A title since joining the region in 2017.

“Everything is about Columbus,” said Lafayette head coach Michael Fair. “Our coaches aren’t overlooking anybody, of course, but it’s fun this time of year to kind of see how it might line up but it’s so crazy (in our region) I don’t know if anybody knows. It’s all about Columbus right now and we get to play at home, which is good.”

Setback For the Blue Devils

Water Valley hit their first speed bump of Region 2-3A play on Friday with a weather-shortened loss to North Panola.

The Blue Devils lost their opportunity at a region title, but can still secure a home playoff game for next week’s first round of the Class 3A playoffs.

With the Cougars securing the No. 1 Seed with their win last Friday, Water Vally’s game at Senatobia this week to close out the regular season will determine The No. 2 and 3 seeds.