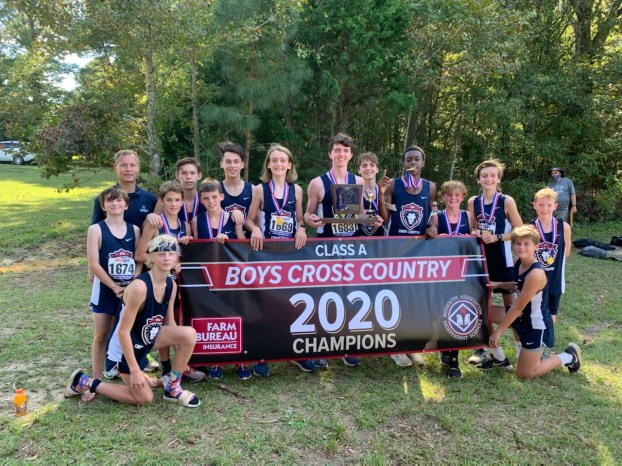 Regents of Oxford’s boys cross country team won the Midsouth Association of Independent Schools (MAIS) Class A state championship on Tuesday, October 20, 2020 for the second year in a row. The meet was held at Choctaw Trails in Jackson. (Contributed photo)

It is tough to do what Regents School of Oxford’s cross-country program has done the past two years, but the Lions have made it look easy.

The Lions boys cross-country team won the Midsouth Association of Independent Schools (MAIS) Class A state championship earlier this month at Choctaw Trails in Jackson. It was the second-straight state title for the program in as many years of its existence.

When Regents joined MAIS as a member school ahead of the 2019-20 athletic season, cross-country head coach Brandon Beckett said he knew they were the new school on the block. What transpired since then was not unexpected by Beckett, but not exactly anticipated either.

“We were kind of chasing (everyone), so to speak, and up-and-coming, I guess, and were successful,” Beckett said. “Then this year, as the coach I certainly felt different coming into the year with basically having pretty much everybody back. We were a young team last year and still a young team. I guess that’s good when you’re winning and you’re young.”

The Lions had three of the top-five finishers in the boys’ 5K meet, with seventh-grader Joseph Skogen coming in third. Eighth-graders Samuel Bryan and Tristan Bryan came in fourth and fifth place, respectively, helping Regents earn 34 points and finishing 27 points ahead of runner-up DeSoto School.

The youth of the program is something Beckett said he finds encouraging moving forward to the 2021 season. The cross-country program is blossoming so successfully and swiftly that Beckett added a girls team this year, which finished in fourth place at the Class 1 state meet.

In 2019, Beckett had just one girl participating.

Prior to joining MAIS, Beckett started the program in 2018 but had only nine or 10 runners. The Lions were not a member of either MAIS or the Mississippi High School Activities Association (MHSAA) so they were eligible for any postseason meets, but they did compete in a few regular season meets.

“Some of our basketball players and a few guys whose parents said, ‘Hey, this is a good opportunity in the fall to get in shape for basketball season,” Beckett said. “I think that’s kind of what it really was three years ago. Last year was different. I obviously went into it a little differently.  I kind of knew what I had, to some degree. I knew we had some kids that could run, obviously very young, but they could run well. I was thinking, ‘You know, this might be something that we could do pretty well.'”

Beckett’s instincts proved true and the past two years are the proof in the pudding. With the immediate success the boys team has seen and the addition of more runners on the girls team, Beckett is entering the program’s third season in MAIS with a target squarely on their back, but his approach is not changing much come next August.

“I hate to use the word change, but I think it just continues to grow,” Beckett said. “Hopefully more and more athletes want to be a part of it. … If I’m being honest, my goal is to not win championships, in and of itself. That’s not the goal. The goal is to build a program that we are proud of and that is recognized as being one of the best programs in the state of Mississippi. Public, private. 1A up to 6A. The results kind of take care of themselves.”

The regular season comes to a close for several teams this week, including Water Valley, while No. 2 Oxford and... read more