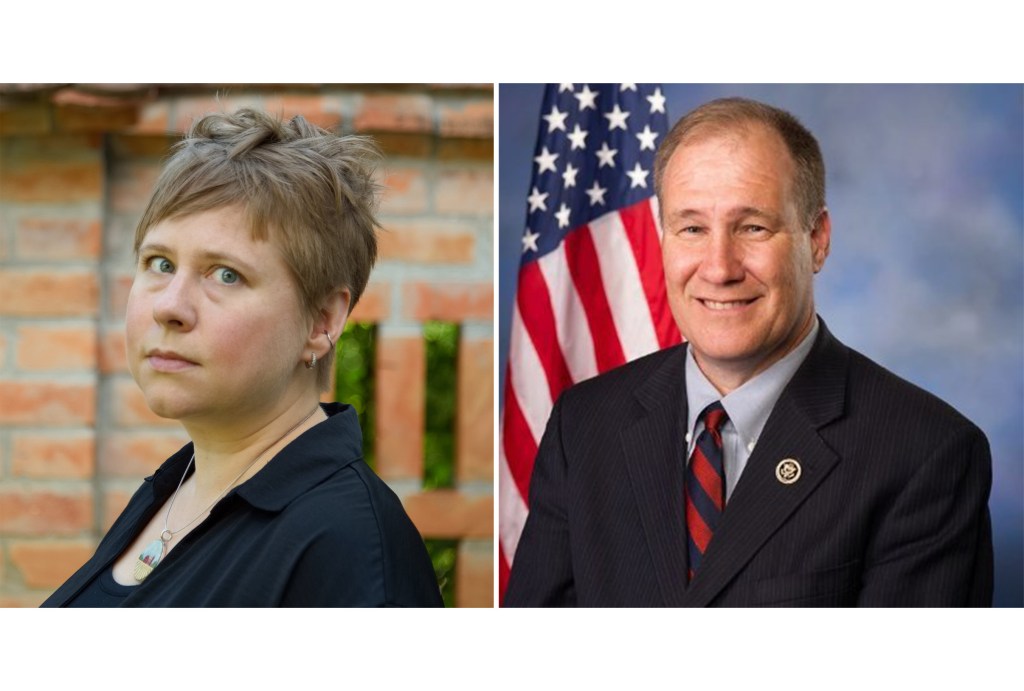 Editor’s note: The Oxford Eagle submitted questions to both Kelly and Eliason for this piece. Eliason responded. Her answers have been edited for clarity and length. Kelly did not respond after multiple attempts to contact him and his campaign. Policy positions and statements in this article are Kelly’s positions as publicly stated in other media outlets and on his website.

The race for Mississippi’s 1st Congressional District between incumbent Republican Representative Trent Kelly, of Saltillo, and his Democrat challenger Antonia Eliason, of Oxford, will be among those decided Tuesday.

Kelly, a veteran who served 30 years in the National Guard, is a former district attorney. He was elected to his post in 2015, when he won a special election following the death of former U.S. Rep. Alan Nunnelee. Kelly serves on the Armed Services Committee, where he is the ranking member of the Military Personnel Subcommittee. He also serves on the Agriculture committee.

A vocal supporter of President Donald Trump’s positions, Kelly has historically voted in line with him. He has described himself as a “red, red Republican,” but also has stressed the importance of bipartisanship. He recently told the Monroe Journal in an article dated Oct. 16, 2020: “It’s all about working together for America – it’s about finding common ground.”

However, Kelly has recently criticized House Democrats saying they are practicing the “politics of fear,” and are not serious about engaging in discussions or looking for solutions.

Eliason, a political novice and self-declared Democratic Socialist, is a faculty member at the University of Mississippi School of Law, where she teaches international trade law, international investment law and contracts. She previously lived and worked in London, England, moving to Oxford to teach at Ole Miss in 2013. At the center of her campaign are economic, racial and environmental justice.

Q: What do you believe is the most important issue facing Mississippians that you will work to address in the U.S. House of Representatives, and how will you work toward a solution?

A: Eliason: Healthcare is the number one issue we face. Far too many Mississippians lack access to basic healthcare, exacerbating pre-existing conditions and leading to higher costs of our system overall. I want universal healthcare, because every person in this country deserves coverage. If we look at the premiums we already pay and our deductibles, universal healthcare would cost less on average for most Americans and ensure complete coverage.

I lived in the United Kingdom, where universal healthcare saved my life. I know it can work, and it won’t be nearly as expensive as people fear. We need to reduce the roles of insurance companies and stop lining their pockets, focusing instead on providers and patients. I don’t want anyone to have to make the decision whether or not to go see a doctor or whether or not to fill a prescription, something that most Americans, including my own family, have to do on a regular basis. We need affordable prescription drugs and universal healthcare.

On National Defense and Veterans, it reads, “I believe the primary role of the federal government is to keep the United States safe from threats at home and abroad. After serving in the Mississippi National Guard for 34 years, I understand the sacrifice and commitment it takes to defend this great nation. I also understand that our responsibility to those who served does not end when a deployment is over or when a war ends. The Veterans Affairs (VA) scandal brought much needed attention to substandard medical care our veterans were receiving and much more needs to be done to ensure our veterans and their families have easy access to quality healthcare.”

Kelly has also stated that he aims to focus on helping the military “stay ready and fit,” while continuing to advocate for additional services and benefits for veterans and their families, including establishing childcare services for children of military members.

Q: Do you believe there should be a national standard for the Coronavirus response, including a comprehensive testing strategy, a national metric for case saturation that would prompt stay-at-home orders or shut downs and a national mask mandate?

A: Eliason: We should have had a more robust national response to COVID-19 from the beginning, including national guidelines on proper protocols, including mask wearing. It is important to note, however, that given the size of the United States, different areas will face different infection rates at different times. So, there should be room for some localized response within a set of national guidelines. We definitely need a comprehensive testing strategy – tests should be readily available and free – and national data on cases. The way the CDC has been hamstrung by the administration has had devastating consequences for individuals and businesses alike. We need clear guidelines, and in a pandemic, the federal government should be driving the response with an effective pandemic response team.

A: Kelly: Kelly provided this statement to Mississippi Today on the Coronavirus response: “Under the leadership of President Donald Trump, a multi-pronged approach to COVID-19 has and continues to be successfully carried out. The Coronavirus Aid, Relief, and Economic Security (CARES) Act, bipartisan legislation, quickly came to the aid of Mississippians and all Americans. This historic legislation provided direct relief in the form of Economic Impact Payments (EIP) and created the Paycheck Protection Program (PPP) which enabled tens of thousands of small businesses to stay afloat while keeping their employees on the payroll. Additionally, unprecedented progress is being made to develop a vaccine. This process typically takes years to yield a vaccine. We are optimistic of having a vaccine delivered to the American people before the end of the year.”

Q: Affordable, and accessible, health insurance and health care rank among the most important issues for most Americans. Where do you stand on the Affordable Care Act and if it is struck down by the US Supreme Court, what should replace it?

A: Eliason: If the ACA is struck down, we need to replace it with universal healthcare. The ACA helped many Americans get healthcare, but has been hindered by depending on a marketplace of providers that states like Mississippi have ensured provide as little choice as possible at the highest cost possible. By rejecting Medicaid expansion, we’ve hurt our poorest and most vulnerable Mississippians. The market isn’t interested in the health of people – it’s interested in the profit for insurance companies and pharmaceutical companies. We already have “socialized” medicine for veterans and for federal employees. Our Congressional members enjoy excellent healthcare at a fraction of the cost that the rest of us pay.

Kelly: An outspoken critic of the ACA, Kelly has written opinion editorials advocating for its repeal and replacement.

Kelly’s website states: “Mississippians and all Americans need to be in charge of their healthcare decisions, not the federal government. A person should be able to choose their doctor and receive the best possible treatment options. The system is in need of reform to lower drug prices and insurance premiums. We must also do everything in our power to protect Social Security and Medicare for those who need it most.”

In an article dated Oct. 23, 2020, from the Northeast Mississippi Daily Journal, Kelly was quoted saying, “We’ve got to get back where healthcare is between a doctor and a patient and not all these administrative folks who are managing healthcare that do nothing but add to the overhead of the healthcare costs. Doctors and patients should determine what type of healthcare happens between patients.”

Most recently, Kelly is a co-sponsor of H353, the “Women’s Public Health and Safety Act,” which will allow a state to exclude providers that perform abortions from state Medicaid programs, with exceptions for rape, incest and if the life of the mother is in danger.

Q: Many Mississippians have been impacted by the economic downturn caused by COVID-19. What role should the federal government and Congress play in restarting the economy and extending aid to businesses and workers who are suffering?

Eliason: The one-time payout was insufficient to help Americans. Mississippians are struggling because of COVID and we should have more federal aid in this time of exceptional crisis. Concerns about the national debt in relation to federal financial support only arise when we talk about helping people. Meanwhile, we have trillions of dollars to throw at the stock market or to bail out financial institutions. As someone who worked in the financial sector for years, markets for the most part are just speculation – a very expensive form of gambling for those with a lot of money. Instead of relying on markets and linking them to retirement, we should be putting more money into social security, and working to help people. Many big corporations that used to make most of their money from producing goods now make most of their money from financial investments. That means that the people working for them become less important. We need to prioritize investment in people and recognize that they are the key to a happy and healthy society. The federal government should help small businesses, help its people and tax large corporations and demand accountability from them.

Kelly: Kelly has stated on Facebook and Twitter that the American economy is already rebounding. He has touted Congress’ passage of the $2.2 trillion CARES Act, which created the PPP and EIP. In a video for Y’all Politics, Kelly said, “I’m committed to helping President Trump get through this crisis,” saying he was “working nonstop to make sure our federal government partners and our state partners, with our medical experts and healthcare professionals to beat this pandemic together.” He said he is “committed to the federal government providing vital assistance, when and where it is necessary.” He praised Trump’s guidelines for reopening the American economy saying those measures, “are leading us in that direction at this hour.” He ended by quoting Trump saying, “Together we will win this war, and we will win it much sooner than people think.”

Kelly has also praised the USMCA agreement that replaced NAFTA and has advocated for a continuation of President Trump and the Republican Party’s economic policies that he said have “achieved unprecedented success.” On Oct. 16, he tweeted, “Mississippi businesses must have the ability to operate without unnecessary and burdensome government regulations.”