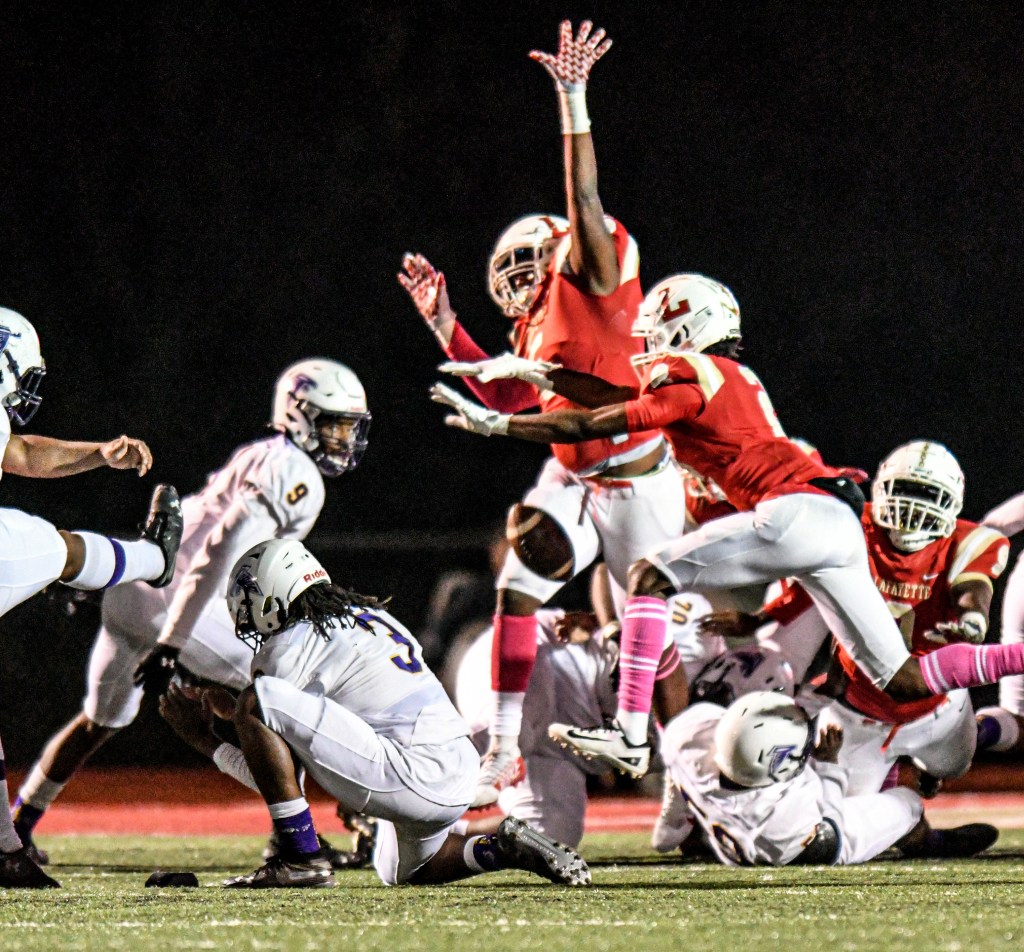 For the first time in over a month, the Lafayette Commodores were tested.

In a second half that featured four lead changes, they simply refused to lose. The Commodores were able to avoid the upset and knock off the Columbus Falcons 24-18 at William L. Buford Stadium. Lafayette continues to control their own destiny for their first Region 1-5A title.

“That’s a good football team with a lot of good athletes that have been on the wrong end of a lot of games this year,” Lafayette head coach Michael Fair said. “The way we move the ball late with Jay Reed, gave us a chance to win…nothing went as script tonight, but it’s the scoreboard that matters.”

The Dores got on the board first on their second offensive drive of the game. Jay Reed capped off an 11-play, 56 yard drive with a touchdown run from four yards out. The score was 7-0 with 2:01 left in the first quarter. Early in the second quarter, the Falcons drove 82 yards downfield to Lafayette’s red zone, thanks to a big throw across the middle from Columbus’ Ethan Conner. The Falcons couldn’t finish the drive. Brendan Toles blocked a field goal attempt with 5:26 left in the first half.

The Falcons ended up finding points anyways a few plays later. Inside his own red zone, Tyrus Williams fumbled the football and tricked its way out of the back of the end zone for a safety. The Commodore lead was cut 7-2 with 3:28 left in the half and they had to kick the football to Columbus.

On 4th and 6, The Falcons faked a punt to get all the way to Lafayette’s 21-yard line with under a minute left. Columbus would end up finding the one-yard line, but was forced to kick a field goal to make the halftime score 7-5. Special teams doomed Lafayette once again to begin the third quarter, Columbus returned the opening kickoff 80 yards the other way for their first lead of the game, 11-7.

Following consecutive three-and-outs, the Commodores used a safety of their own to cut the Falcon lead to 11-9 midway through the third quarter. Lafayette took advantage of the free possession with a second Jay Reed touchdown run with 3:26 left in the third quarter, making it a 16-11 lead.

“Several times this year, we needed our defense to make a play,” Fair said. “That definitely gave us momentum.”

Brendan Toles would follow that up with an interception, but resulted in a three-and-out. Early in the fourth quarter, the Dores would come up empty with a missed field goal. Columbus used a pair of big plays to retake the lead with 5:44 left to play. Conner found a wide open receiver across the middle, giving Columbus an 18-16 lead. Lafayette proceeded to continue
giving Reed the football and it worked. Reed scored his third touchdown run of the game with 1:09 left to play. The defense did the rest.

The Commodores will travel to Lake Cormorant Gators next week to take on the Gators. Kickoff time is set for 7 p.m.

“They’re all big from now on,” Fair said. “Smartest thing for us to do is treat it like a playoff game. That’s what we’re going to do. I expect our best effort.”