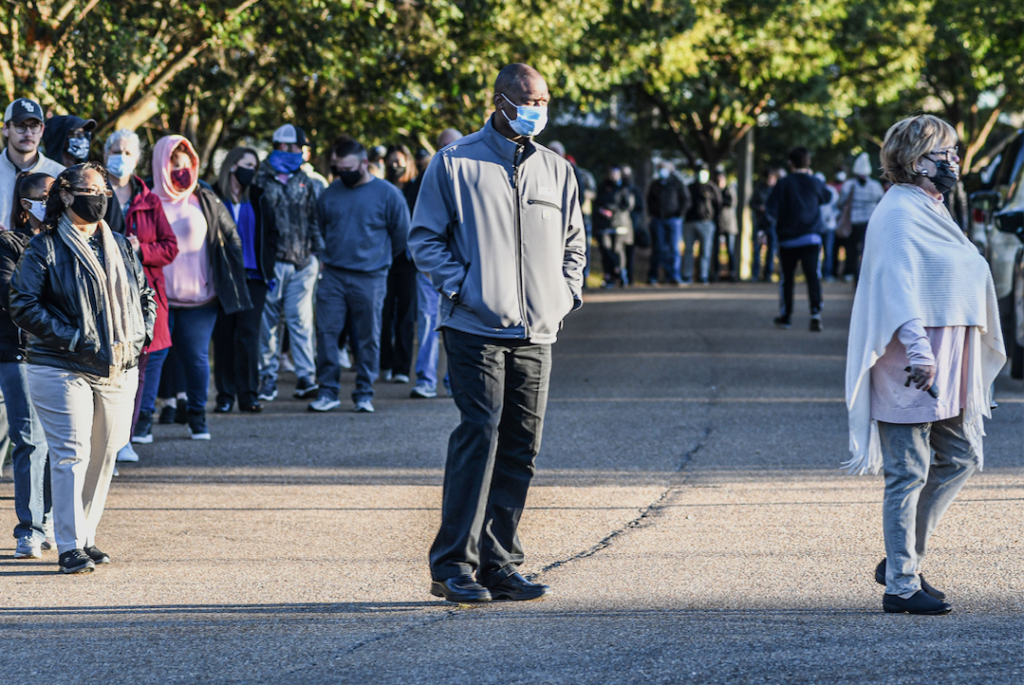 Voters stand in line waiting to vote at the polls at the Oxford Conference Center in Oxford, Miss. on Tuesday, November 3, 2020. (@Bruce Newman)

Lafayette County, like the rest of the country, is seeing voters coming in droves.

Tuesday brought about Election Day 2020 and with it a record turnout in voters, according to Lafayette County Circuit Clerk Jeff Busby.

Polls opened at 7 a.m., but registered voters were already in long lines, waiting to exercise their right. This year’s Presidential Election between President Donald Trump and former Vice President Joe Biden is one of the most contentious in recent memory, spurring record numbers at polling precincts nationwide.

Several precincts throughout Lafayette County saw heavy traffic, including at the Lafayette County Civic Center off of Highway 6 West on Tommie Collie Jane Road, where cars were parked on the side of the road as voters walked up to their respective precinct. Cars were also parked on both sides of the narrow road, effectively reducing it to one lane and causing traffic problems even with law enforcement officers directing traffic.

Tuesday’s large turnout was anticipated by Busby, who said 20 percent of Lafayette County’s registered voters participated in absentee voting throughout October. There were 6,500 absentee ballots cast this year, compared to the 2,300 cast during the 2016 election.

Lafayette County shifted to paper ballots this year and there were a few issues with scanning machines early on, but Busby said they were all fixed quickly. A machine at the District 1 precinct located at the new extension office on F.D. “Buddy” East Parkway South was not working properly, but Busby said they got the machine up and running and also added a third machine to help with the large turnout.

Check back for election result updates as they begin to roll in after 7 p.m. tonight at oxfordeagle.com.