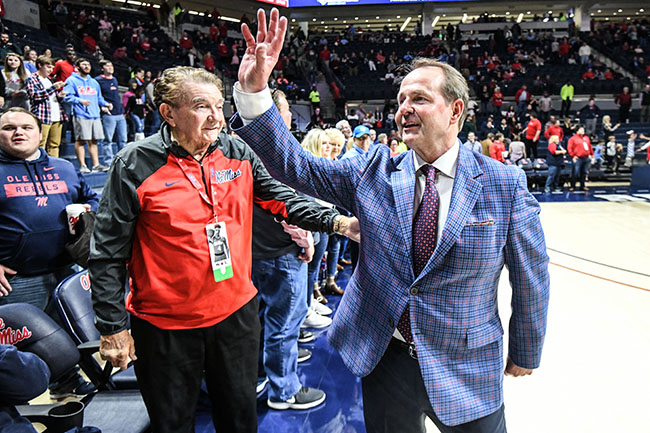 Mississippi head coach Kermit Davis waves to the crowd after it sings "Happy Birthday" to him following a win over Middle Tennessee Blue Raiders at the Pavilion at Ole Miss, in Oxford, Miss. on Saturday, December 14, 2019. Mississippi won 82-64. (Bruce Newman, Oxford Eagle via AP)

The 2020-21 Ole Miss basketball season is set to get underway later this month, and will honor a former player in the process.

The school announced the Justin Reed Ole Miss Classic will take place Nov. 25 through 27 with the men’s program hosting Arkansas State, Central Arkansas and Jackson State during Thanksgiving week. The event serves as the Rebels’ season opener after the NCAA announced the men’s and women’s basketball season would not start until Nov. 25 due to the COVID-19 pandemic.

The tournament is in honor of Justin Reed, who played for the Rebels from 2001 to 2004 and was a four-year starter. Reed set several records during his time at Oxford before getting drafted by the Boston Celtics in 2004. He was the first Rebel to be named All-SEC in four different seasons and ranks seventh all-time in scoring (1,785 points) and ninth in rebounds (766).

Reed died in October 2017 at the age of 35 after a battle with with angiosarcoma, a cancer of the inner lining of blood vessels.

“What a great way to tip off our season with three straight days of basketball leading up to the Egg Bowl,” said Ole Miss head coach Kermit Davis. “We could not find a finer man to name our classic after than Justin Reed, one of the most popular players in Ole Miss history.”

The season-opening event is a round robin format, with each team playing three games over the three days. The Rebels will start the tournament against Central Arkansas on Nov. 25 followed by a Thanksgiving Day game against Jackson State. They will close out the event against Arkansas State on Nov. 27.

Tipoff times and ticket information will be announced at a later date, according to the school.

Ole Miss announced the rest of their non-conference schedule on Wednesday, which begins with hosting Memphis on Dec. 5. Other home non-conference games include University of North Carolina-Wilmington on Dec. 12, UT Martin on Dec. 22 and Wichita State on Jan. 2.

The Rebels’ road schedule ahead of conference play includes trips to Middle Tennessee on Dec. 16 and Dayton on Dec. 19.

The school also announced Pavilion Madness, which is taking the place of the annual preseason Square Jam event due to COVID-19. Pavilion Madness will take place on Nov. 11 at 6:30 p.m. CT, and a limited number of fans will permitted to attend through a pre-selected process. The event will also be livestreamed on the Ole Miss Athletics Facebook page.