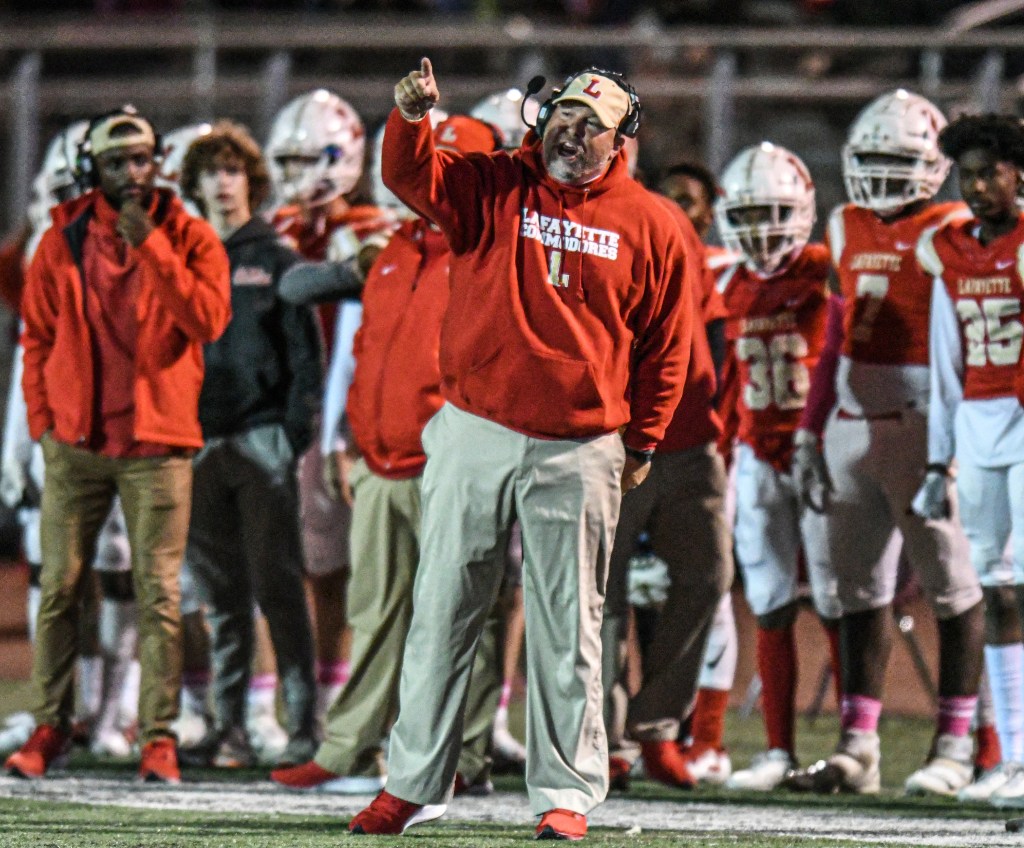 Lafayette High reacts to a holding penalty call on the Commodores that negated a touchdown against Columbus at William L. Buford Stadium in Oxford, Miss. on Friday, October 30, 2020. Lafayette's season ended on Tuesday after the Commodores were forced to forfeit Friday's first round playoff game against Neshoba Central. (@Bruce Newman)

Lafayette’s 2020 football season has come to a premature end.

The Commodores (7-3) were forced to forfeit Friday’s first round playoff game against No. 6 Neshoba Central in the Class 5A playoffs due to multiple positive cases of COVID-19 and players quarantined.

Lafayette head coach Michael Fair told the EAGLE on Tuesday evening that the team had practiced on Monday and was set to have enough players for Friday, but they received a third positive test on Tuesday that forced the program to shut down operations.

“The folks we feel the worst about are the seniors,” Fair said. “Your senior year of football should end on the field, good or bad. For me to have to sit them down and end their season, and their football career for most of them, on a deal like this is pretty tough. Been a hard day.”

Fair said he was able to meet with most of his players in person to give them the news their season was over, but some players are in quarantine and he had to speak with them over the phone.

Lafayette is having a tough stretch with COVID-19 as the girls basketball team shutdown for two weeks and began quarantine on Monday. The Lafayette County School District reverted back to their hybrid schedule on Tuesday for both the high school and middle school due to a surge in positive cases last week, reporting 17 across the district.

The Commodores were prepared to bounce back after their 26-16 loss at Lake Cormorant last Friday to end the regular season. Fair said the team’s morale was high and they had a good practice on Monday in preparation to begin the postseason.

“We didn’t play well enough to win the other night. Got beat by a good football team, but we felt we were still good enough to win North Half,” Fair said. “When we left the locker room after practice (on Monday) everybody believed in that. Which is what you’ve got to have. The kids have to believe and they really did. … It was a lot of fun to be around this team. It’s sad that it had to end like it did today.”

Neshoba Central will now advance to the second round on Nov. 13 where they will await the winner of Ridgeland and Lake Cormorant.