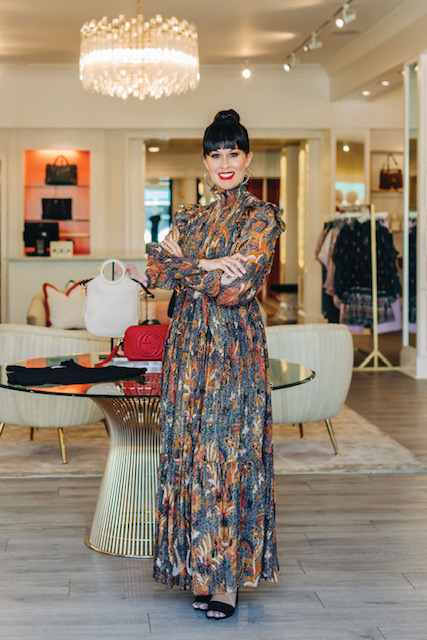 Anne–Marie Gordon, who owns Cicada, a boutique women’s clothing store on The Square in Oxford, had a brain drain problem.

Despite being in business for more than two decades, she still couldn’t figure out how to stop her employees from leaving after about two years and taking with them the business knowledge she had spent time and money cultivating.

Frustrated, she vented to a friend. That friend suggested she talk Jon Maynard and Allen Kurr, the president/CEO and vice president of the Oxford-Lafayette Chamber of Commerce and Economic Development Foundation respectively. Gordon admitted she was hesitant. She didn’t expect Maynard and Kurr would be receptive to her plight. Afterall, she was just a small retailer of women’s clothes, not a big industrial employer. To her “glorious surprise,” she was wrong.

“They were incredibly receptive to me and they assured me I wasn’t the only one (experiencing the brain drain),” Gordon said.

That initial conversation turned into a collaboration with the EDF’s workforce development team. That in turn motivated Gordon and longtime friend and fellow business owner Sarah Smythe to finally realize a dream they shared: Launching a conference for women to help them to make the leap into entrepreneurship.

Both women had opened their own businesses, and through trial and error, were successful, but it wasn’t easy and they certainly hadn’t done it alone. Both women were guided by mentors who provided honest feedback and guidance. They also wanted to address another problem they recognized through their experiences: often women, particularly in the South, often don’t launch a business because they are afraid of one aspect or another. Maybe it is that they fear being able to balance it with their desire to have and raise a family, or maybe its fear of not knowing how or where to start, or who to turn to for advice when problems arise. The idea was to create a conference to provide women “a tool box full of things they can call on to make that leap into being a business owner,” according to Gordon.

The first MENT Women’s Conference took place in late February. The two-day event sold out and was attended by more than 400 women. MENT was a play on all the aspects it would provide attendees, for example, encouragement, advancement, and mentorship, explained Gordon. There were panel discussions, breakout sessions, and on-one mentoring opportunities along with a slate of informal events to encourage networking.

“We wanted to look at all the aspects of being your own boss, from QuickBooks to the reality of what it means to be a woman and have children… We wanted them to dig into the meat of it,” she said. “Their stories were honest and true, and funny and heartwarming, they made you cry and laugh.”

The event was so successful it will definitely return in 2022, said Gordon, noting if it weren’t for the uncertainty of the global Covid-19 pandemic the event would likely return in 2021 too.

Gordon gives credit for the event’s success to her new found relationship with the Chamber and EDF.

“The Chamber was incredibly instrumental in making this conference happen,” said Gordon, noting that without them supporting the idea and then introducing them to resources to help them make it happen, it would never have come together.”

“We just made connections for her, and she made everything else work the way she wanted it to,” Maynard said. “Our primary goal is to grow Oxford from the inside out and to empower individuals whomever they are to add to the economy and to do that on their own terms.”

Maynard added, however, that what Gordon and her co-chair did was novel in his experience as a chamber leader. He has never had a business owner identify an economic development problem and then take the initiative on their own to solve it for others for purely philanthropic reasons.

Gordon herself felt even more motivated and empowered to giving back to the community that. Following the conference, she was asked to join the board of directors of the EDF and the steering committee for the Oxford Relief Fund, which is giving small grants to businesses struggling in the wake of COVID-19.

“She has really been a great advocate for us. She is proof that the more you engage the more you get paid back,” Maynard said. “It’s the members who remain engaged who get the most out of their chamber membership. The ones who are waiting for the chamber to do something don’t get nearly as much benefit.”