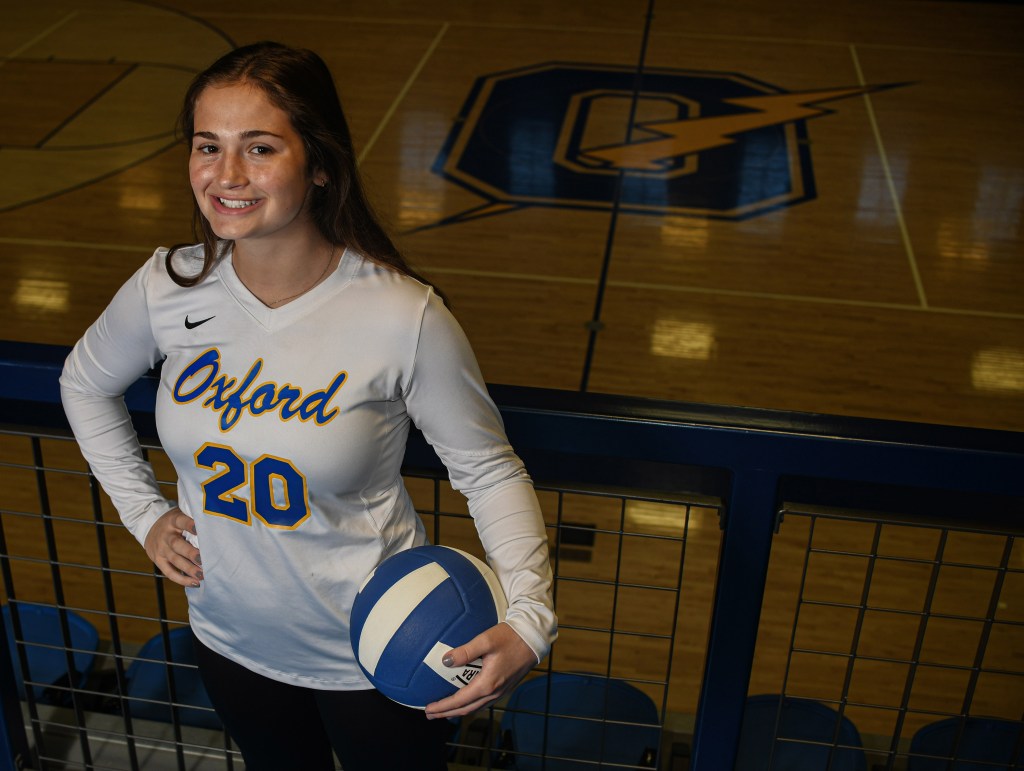 This season was unlike any volleyball season in recent memory.

Throughout canceled games, quarantined players and the constant uncertainty on a daily basis, Oxford’s Catherine Bianco remained a constant for her teammates. Without a senior on the roster, Bianco and the rest of the juniors had to become senior leaders a year early.

That, along with her blistering production on the court in 2020, earned Bianco this year’s EAGLE Player of the Year and a spot on the All-Area Team.

First-year head coach Ashley Martin said she was also thankful to have Bianco and her leadership and experience, as it helped make her transition from Wayne County to Oxford and learning her team a little bit easier during such unique times.

“It was probably one of the things that helped us go as far as we did,” Martin said of having Bianco on the team. “We had a lot of people stepped up and our juniors really stepped up, not having seniors on the team. …We could always count on (Bianco) if we were in a bind to slow things down on the court and to make sure things got under control.”

Defensively, Bianco accounted for 191 digs and had 23 blocks.

For Bianco, her success is attributed to the success the rest of her teammates had with her on the court.

“We have a young team, but there’s a couple upperclassmen that have been playing for a long time,” Bianco said. “We’re getting close to the end of our time playing together and we’re trying to make the most of every season and get further and further every year. … I definitely think we had to grow up more and just show maturity on the court for the younger players on the team.”

Another junior who had to have a senior-like presence on the court, Tacke provided a defensive presence at the net for the Chargers. She recorded 138 digs (5.75 per match) and 43 blocks.

“I thought (Tacke and Bianco) had great team chemistry this year,” Martin said. “Her hitting was really good, as well as her defense. She started playing six rotations this year and I think that really opened up a new perspective for her and her palying experience. She was able to really buy in on the role of an all-around volleyball player and not just a hitter.”

It was a tough season for the Commodores in 2020, who missed out on the Class 5A playoffs but were anchored by strong play from Kailey Gooch and Chloe Carr.

Gooch and Carr’s effort on the court earned them both a spot on this year’s All-Area Team and were key players that first-year head coach Kelsie Poole could rely on night-in and night-out.

For Carr, who will be a freshman next year, it was a strong performance as a eighth grader in 2020. As libero, she recorded 232 digs and helped serve up seven aces.

“Chloe is only in eighth grade, but she is a force to be reckoned with,” Poole said. “She is unbelievable in the back row. She can read hitters and move her body to get up digs like a seasoned veteran.”

In her junior season, Gooch was a relied on by Poole as if she was already a senior. She recorded 147 kills, 14 aces and 96 blocks this season.

“Kailey is a strong leader on the court,” Poole said. “She is an aggressive player with a high IQ of volleyball.”

The Blue Devils made their way to the second round of the Class 3A playoffs this season due the performance of several players, but Chloe Clement and Sara Ellis Dean were two of the biggest producers on the court.

In her final season on the court as a Blue Devil, Dean was one of Water Valley’s key defenders. She recorded a team-high 45 digs to go with 76 returns. Offensively, Dean had 10 aces.

“Sara Ellis Dean was our only senior this year and she played every second as if it were here last,” said Water Valley head coach Allison McCain. “Her leadership and determination helped to push the team to their highest potential.”

As a sophomore, Clement was one of the Blue Devils top offensive performers while also settling into a new role on the team. She recorded a team-high 119 points due to a team-best 37 aces along with 12 kills. Clement had 38 returns and 17 digs as well.

“Chloe Clement came in and took charge, taking role as a new varsity setter,” McCain said. “She has the most positive attitude and will work until she has perfected her skills.”