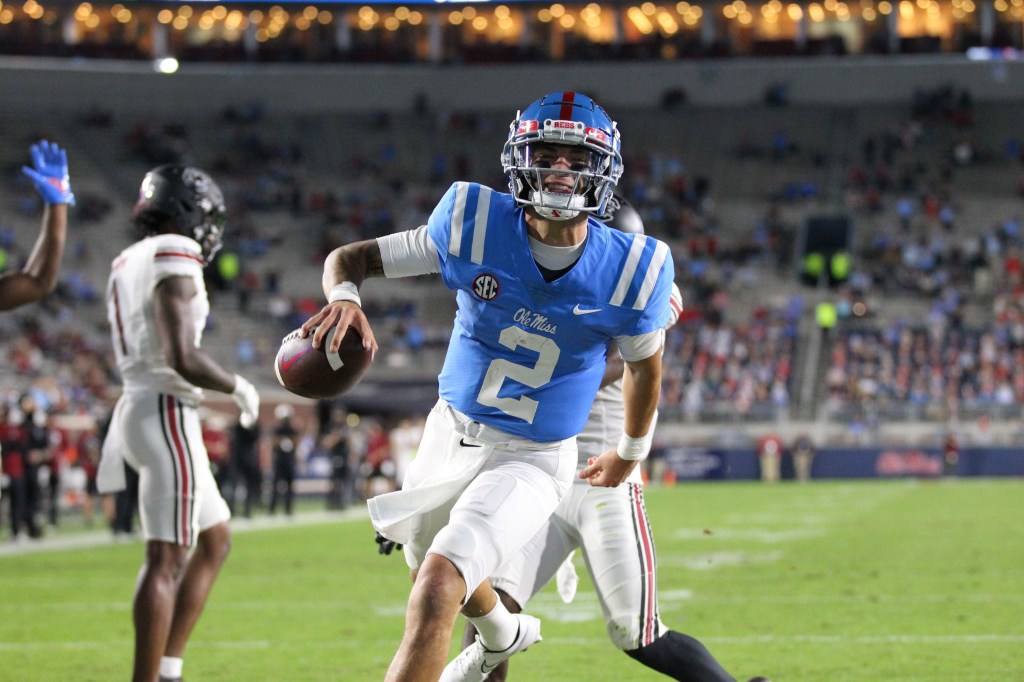 Ole Miss quarterback Matt Corral walks into the endzone for the Rebels second touchdown of the first half. Corral passed for for over 500 yards, setting a new school record for most passing yards in a game. The Rebels won 59-42.

Ole Miss threw everything they had, including a clipboard, against South Carolina on Saturday.

The Rebels had another night of record-shattering offense and the defense got key stops late in their 59-42 win over South Carolina at Vaught-Hemingway Stadium.

All of the points and the back-and-forth between the Rebels and the Gamecocks, it was all overshadowed for a brief moment when a wide-open Elijah Moore caused Ole Miss head coach Lane Kiffin to celebrate what would be a 91-yard touchdown by tossing his clipboard high into the air and sprinting after his receiver.

The first-year Rebel coach had plenty to get excited about with his offense. The 708 totals yards was the most in an Southeastern Conference game in school history. It surpasses the previous record, which was 647 yards against Alabama on Oct. 10. In their last two games, Ole Miss (3-4) has recorded 1,335 yards of total offense.

No longer is Shea Patterson the record-holder for most passing yards in a game. Matt Corral became the first quarterback to throw for 500 yards, finishing with 513 and four touchdowns. Corral surpasses Patterson, who previously held the record with 489 passing yards against UT Martin in 2017.

The record was broken on 4 & 11 when Corral found Moore for a 25-yard touchdown pass late in the fourth quarter. He was not aware he had thrown for over 500 yards until they announced his record on the scoreboard.

“I try not to look at that,” Corral said. “When I look at that, then now I’m thinking about other stuff and not the plays that we’re about to run. … It’s a blessing to be in this spot and be around these people. You can’t make this stuff up, but this just happened to me and this just fell into my lap.”

Moore also had another record-setting performance on Saturday. The junior receiver became the fastest player in school history to 1,000 receiving yards in a season with his 13 receptions for 225 yards and two touchdowns.

The game was not all positives for the Rebels. The porous run defense returned on Saturday as South Carolina’s Kevin Harris rushed for 243 and a school-record five touchdowns. The Gamecocks (2-5) had 548 yards of total offense, with 318 of them on the ground.

After giving up six touchdowns in the first eight South Carolina possessions, the Rebel defense finally found ways to get them off the field and forced a punt and two turnover on downs in the final three Gamecock possessions.

Ole Miss is scheduled to travel to College Station next Saturday to take on No. 5 Texas A&M. The Aggies had to postpone this week’s game against Tennessee due to issues with COVID-19.