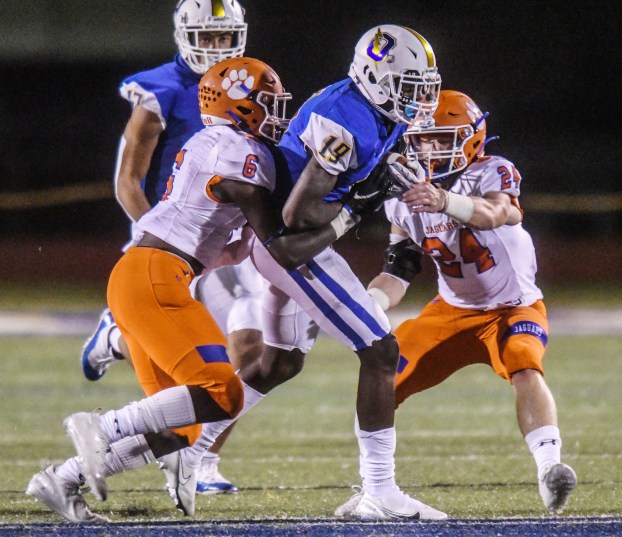 Oxford High’s Jalen Webb (19) is tackled by Madison Central’s B.J. Washington (6) and Jackson Mize (24) in MHSAA Class 6A playoffs at Bobby Holcomb Field in Oxford, Miss. on Friday, November 13, 2020. The Chargers host Hernando in the second round on Friday. (@Bruce Newman)

No. 2 Oxford, Hernando set for rematch with North Half berth at stake

Beating someone twice in one season is always difficult, but it is something Oxford must do if they want to keep their 2020 season alive.

The No. 2 Chargers host Hernando in the second round of the Class 6A playoffs on Friday. The winner advances to the North Half championship game next week against the winner of No. 5 Clinton and Warren Central.

Oxford (10-0) is coming off their thrilling victory over Madison Central in last week’s first round. Linebacker Tristan Shorter stopped Jaguars quarterback Victor Sutton II inches before the goal line in the final seconds of the game to preserve the 25-23 win for the Chargers.

“I think our team has a lot of confidence to continue to play, and one of the things we talk about is putting on more steam as the game went along,” Cutcliffe said after Friday’s game.

The last time the Chargers and Region 1-6A foe Hernando (8-3) met was on Oct. 30 with both teams jockeying for the top spot in the region. Oxford had to use one of their patented second-half comebacks, outscoring the Tigers 24-7, for the 37-27 win on the road.

Oxford quarterback Michael Harvey threw for 137 yards and a touchdown while running back Roman Gregory rushed for 100 yards and a score on 18 carries. The Chargers’ success in the second half hinged on them not getting in their own way and finishing drives when able.

They will need to more of that on Friday if the Chargers want their winning streak to extend to 24 and get themselves a chance to return to Jackson and defend their 6A title.

Hernando advanced to this week’s second round after a back-and-forth victory over South Panola in Batesville last Friday. The Tigers of Hernando outscored the Tigers of South Panola 20-12 for to rally back for the 36-33 win.

Friday’s game is set for a 7 p.m. kickoff at Bobby Holcomb Field.

More than a dozen convenience stores in Lafayette County were selling beer, vape pens and e-cigarettes to minors, according to... read more