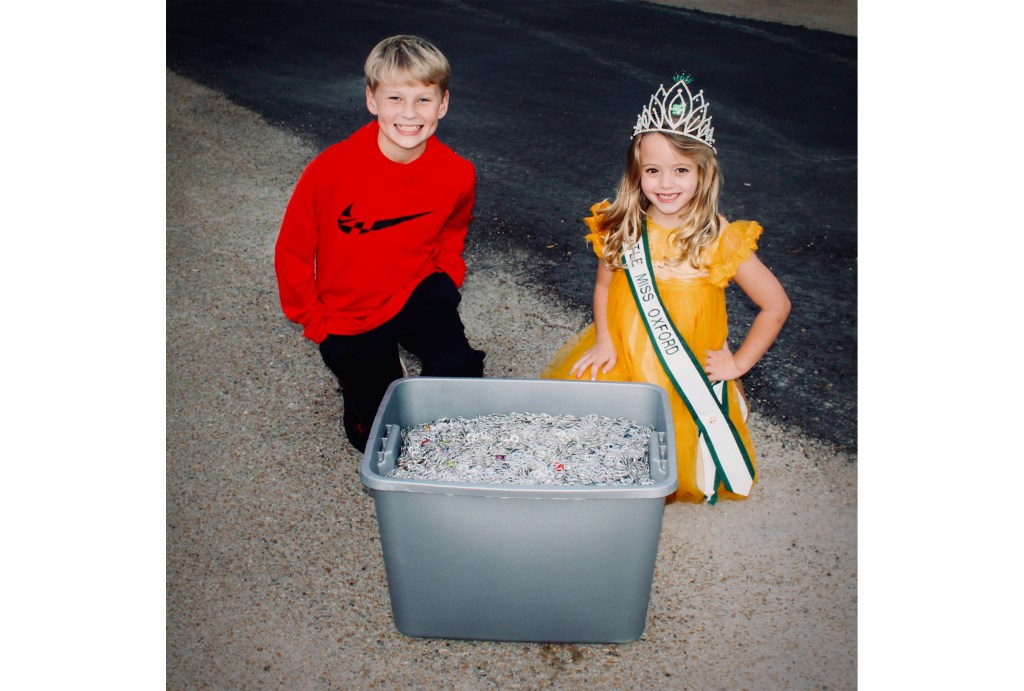 Lane Theobald, left, and Lily Baker, right, pose with the nearly 68,000 soda can tabs that Theobald donated to the Ronald McDonald House in Baker’s honor. Theoboald has collected the tabs for nearly five years. (Courtesy of Nichole Baker)

Lane Theobald has always done things for others, and this holiday season is no different.

Theobald, 12, learned about Lily Baker, a first-grader at Lafayette Lower Elementary who had leukemia and had to spend time at the Ronald McDonald House. Theobald immediately told his mother he wanted to do something for her, and he had the perfect idea.

The sixth-grader at Lafayette Upper Elementary has been collecting soda can tabs for around five years, and asked his parents if he could donate them to the Ronald McDonald House in Lily’s honor.

Theobald’s kindness goes back to when he was in the first grade himself and began seeing St. Jude and LeBonheur Hospital commercials  on television.

“Lane has always had the biggest heart and is always trying to do for others,” said Lane’s mother, Haley Bundren. “It crushed him when he learned so many kids have to spend their days in the hospital. Ever since, he has been doing anything and everything he can to help those kids. We donate to them for Lane every year.”

Lily’s mother, Nichole Baker, made a Facebook post requesting the can tabs and tops. A mutual friend saw the post and tagged Bundren, and Baker immediately reached out.

Bundren’s husband, and Lane’s stepfather, Jarrett Bundren, is the one who introduced Lane to collecting soda can tabs. Over the course of the five years, Lane has collected roughly 44 pounds’ worth, or nearly 68,000 tabs. Friends of Lane and his family also helped donate tabs over the years.

“They knew they wanted to give them to us to give to (Lily),” Baker said. “It melted my heart. …It shows me the innocence and purity of children. They want to give. They have such big hearts and it makes me want to cry because as adults, we can learn so much from children. Here he is in sixth grade wanting to do something for someone he doesn’t even know, and how many adults do we know that do that?”

Lane and Lily met recently, and Lane’s family gave Nichole the tabs, which she took down to the Ronald McDonald House in Jackson last week. Now that the two have met, Lane has challenged himself to collect the same amount of tabs, but in a shorter amount of time.

“Although I am so proud of my Lane and his amazing heart to do for others, Lily is the true hero and an inspiration for us all,” Bundren said. “She is an absolute doll. Not many would ever be able to endure what she has in her short little life.”

Budnren made Facebook asking friends and family for tabs and she said Lane has is seeing a strong response. For those interested in donating, message Bundren or her husband through Facebook.