CARDIAC CHARGERS: No. 2 Oxford withstands No. 5 Clinton for 6A North Half crown 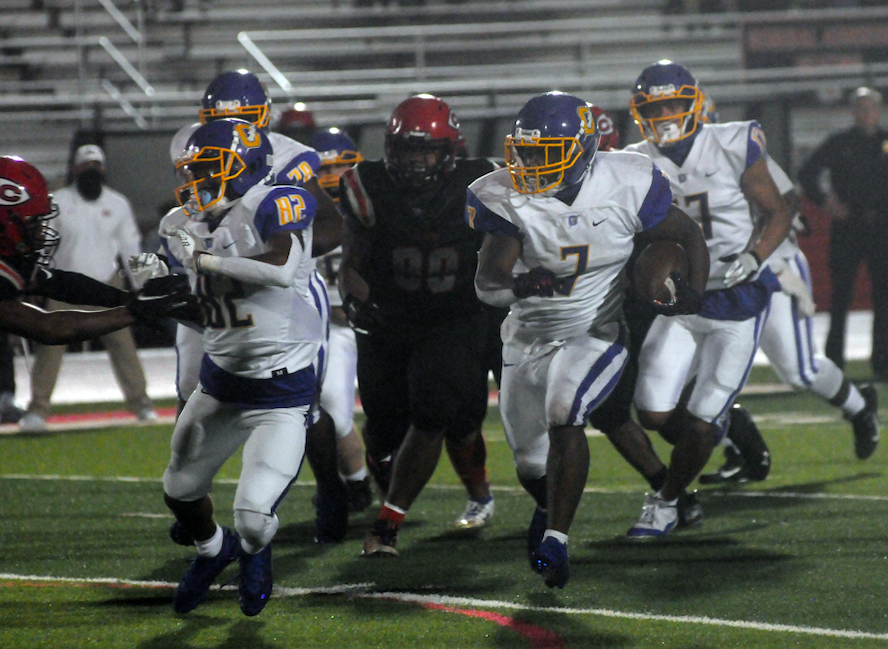 CLINTON — The kings of Class 6A are set to defend their crown.

No. 2 Oxford defeated No. 5 Clinton 31-27 for yet another comeback victory in the Class 6A North Half championship at Clinton High School on Friday. A masterful performance from running back Omar Howell and a defense that continues to make plays when they are needed most was this week’s recipe for success.

The Chargers (12-0) are one win away from keeping the 6A trophy in Oxford for another season and from a perfect season.

Trailing by four points at halftime, Oxford dealt the final blow in what was a back-and-forth second half that also saw them once again score 14 points in less than 20 seconds.

“That was a heck of a ballgame,” said Oxford head coach Chris Cutcliffe. “Clinton’s a really good football team and I think it was just back-and-forth all night. We were able to make enough plays at the end to get it done.”

The Charger defense, specifically Tristan Shorter, made sure their season was not over a week early. With 25 seconds remaining in the game, Shorter deflected Clinton quarterback Caleb Miller’s pass on fourth down to secure victory for Oxford.

Shorter also had a 15-yard pick-six in the first quarter to give the Chargers a 10-0 lead at the time. The Chargers picked off Miller three times in the first 16 minutes of the game.

“Takeaways were huge,” Cutcliffe said. “We stopped some drives with that and then just made enough plays at the end. They’re a really talented team and (Miller) is a heck of a player.”

With Roman Gregory out after suffering an injury last week against Hernando, the onus was on Howell to be the bell cow for the Chargers on Friday. Howell delivered and then some, rushing for over 200 yards on 30 carries.

After Miller threw a touchdown pass on 4th and 6 from Oxford’s eight-yard line to go up by three with less than five minutes remaining, Howell responded the following drive, rushing for 64 yards and a touchdown to give Oxford what would be the game-winning score.

“Omar is a physical runner and he’s a guy that is hard to tackle as the game wears on,” Cutcliffe said. “He knew that more was going to fall on his plate. Cam McJunkins came in and gave us a few plays and Jay Wortham came in and got us a few carries, but Omar did a great job of stepping up.”

Wortham caught a touchdown pass late in the third quarter as part of the Chargers two scores in quick succession. On the ensuing drive, Miller was hit and fumbled the ball which Alex Sanford picked up for the scoop-and-score just 18 seconds later.

Oxford now turns their attention to the team whose heart they broke in Hattiesburg nearly a year ago. No. 1 Oak Grove defeated Northwest Rankin to win their third straight South Half title, setting up a much-anticipated rematch between the two best high school football teams in the state.

The Chargers and Warriors will kickoff the 6A title game next Friday at 7 p.m. inside Veterans Memorial Stadium.