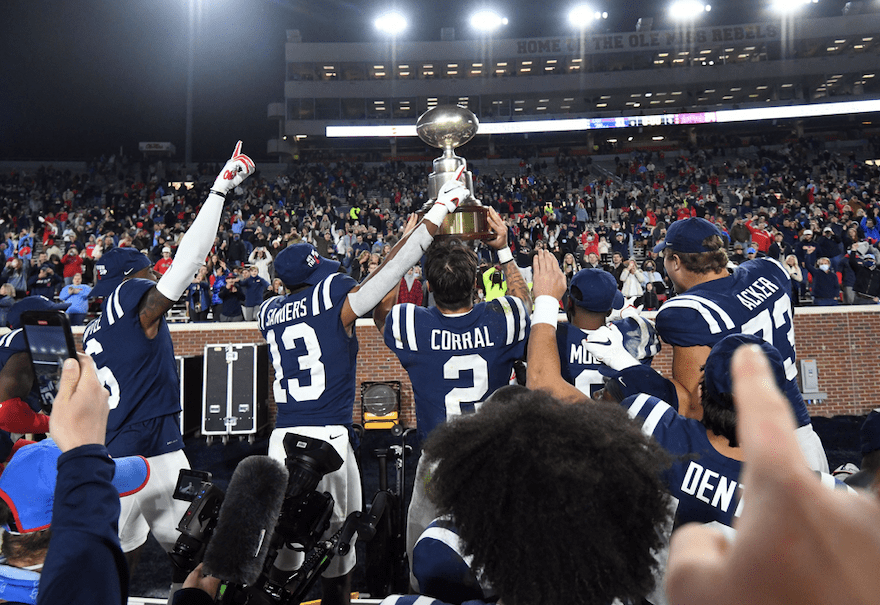 The Golden Egg is coming back to Oxford.

In his initiation into one of the fiercest rivalries in college football, Lane Kiffin earned his first Egg Bowl win in Ole Miss’s 31-24 victory over Mississippi State on Saturday at Vaught-Hemingway Stadium.

The win was the first for the Rebels (4-4) since 2017 and the first Egg Bowl win in Oxford since 2014. Once the clock hit triple zeros, Matt Corral took the trophy to the sideline and raised it up to the Ole Miss faithful. It was a celebration that continued inside the locker room as players were able to finally put the end of last year’s Egg Bowl behind them.

“You could feel the energy from our fans. I can only imagine what would have been like if it was full,” Kiffin said. “Great to come across with a win. Just wish we would have played cleaner and better. Happy for our fans. Happy for our players. …Good to get the trophy back where it belongs. Let’s keep it here for a long time.”

A crucial moment occurred early in the game. On the ensuing drive following Corral’s 48-yard touchdown pass to Dontario Drummond, Mississippi State (2-6) appeared to have scored on an Austin Williams reception. Instead, Tylan Knight knocked the ball out of Williams hand just shy of the goal line and Deane Leonard scooped it up for an 84-yard return.

Snoop Connor would score five plays later to give the Rebels a 14-0 lead late in the opening quarter. Mississippi State would not get any close than three points the rest of the game.

Another record was broken by Elijah Moore on Saturday in what is becoming a regular occurrence. Moore finished with 12 catches for 139 yards, which gives him 86 catches on the year for a new single-season school record for most catches. Moore once again knocked AJ Brown off the top of the podium in the process. Brown previously held the record with 85 catches in 2018.

Moore is on pace to shatter the current record for most receptions per game, which Brown holds with 7.1 catches a game during the 2018 season.

Saturday was a night for Moore to re-write his Egg Bowl story after the way last season’s game ended in Starkville on Thanksgiving night.

“I was just playing my game,” Moore said. “Last year’s (game) is in the past and I was just moving forward. I was just doing whatever I could do for my team in that moment. That’s what we did. We won, we got the Egg and that’s all that matters.”

Saturday’s game was an important one for Otis Reese in a very different way. The junior defensive back played in his first game as a Rebel after the NCAA granted him immediate eligibility earlier in the week. Reese finished with eight tackles and a pass breakup.

Ole Miss gets another unexpected open week with their game at LSU scheduled for Dec. 5 being postponed this past Friday. A makeup date for it, and possibly their Nov. 21 game at No. 5 Texas A&M that was also postponed, will be announced at a later date, according to the Southeastern Conference office.