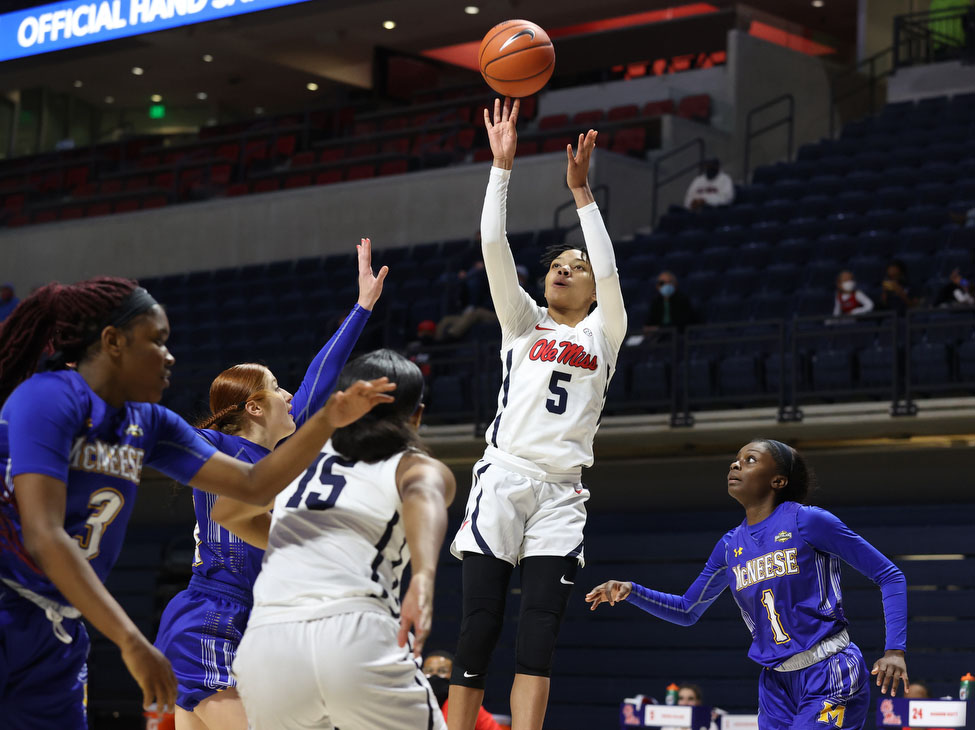 Ole Miss’ Snudda Collins (5) attempts a shot during the game against McNeese State on November 30th, 2020 at The Pavilion . The Lady Rebels won 99-44 in their season opener.

It was one game, but Yolett McPhee-McCuin got a glimpse of what the rebuild could look like.

In their season opener, the Ole Miss women’s basketball team McNeese State 99-44 on Monday inside The Pavilion. Monday’s game served as the official opener after the Rebels’ Nov. 25 game with Northwestern State was canceled due to COVID-19 issues.

With a top recruiting class and securing some top transfers, the expectations were high for McCuin, who is in her third year at the helm of the Rebels’ program. Coming off a 2019-20 season where Ole Miss went 0-16 in Southeastern Conference play, this season is an official start of turning around a program that has not been to the NCAA Tournament since 2008.

“Incredibly grateful to be out here playing,” McCuin said. “I thought everybody played well. We’re fairly new. The only players who have experience in playing in a game are our returners. Everybody else are just brand spanking new.”

Monday’s performance was a jumping-off point that saw production up and down the roster. Ten different players scored for the Rebels (1-0) with a pair of freshmen leading the way. Madison Scott and Snudda Collins led all scorers with 23 and 15 points, respectively.

Collins shot 62.5 percent from three-point range, hitting 5-of-8 shots beyond the arc.

“As a freshman coming in, of course I was going to be nervous and have a lot of anxiety,” Collins said. “When I first got out there I was making minor mistakes. Then as I calmed down and just got into my natural flow and remembered that I’m a shooter and I can make it if I take my time, then things started going well for me.”

Monday was also the official debut for Maryland transfer Shakira Austin. Austin was granted immediate eligibility last month, giving the Rebels a boost in size and length on the court.

That size was immediately felt with Austin racking up two blocks in the first five minutes of the game. She finished with 12 points, four blocks and six rebounds. Georgia transfer Donnetta Johnson had a quick start to her first game as a Rebel, scoring six points in the opening quarter before finishing with 10 for the game.

“Teams like (McNeese), they’re so small so they just crowd her space,”McCuin said. “They bothered her a little bit, so she started to go inside. Shakira is a type of player that will rise to every level of occasion. As the competition gets better, she’ll get better.”

Ole Miss returns to action on Thursday when they host Kansas (2-0) in the SEC/Big-12 Challenge at 7:30 p.m. CT. The game will air on SEC Network.