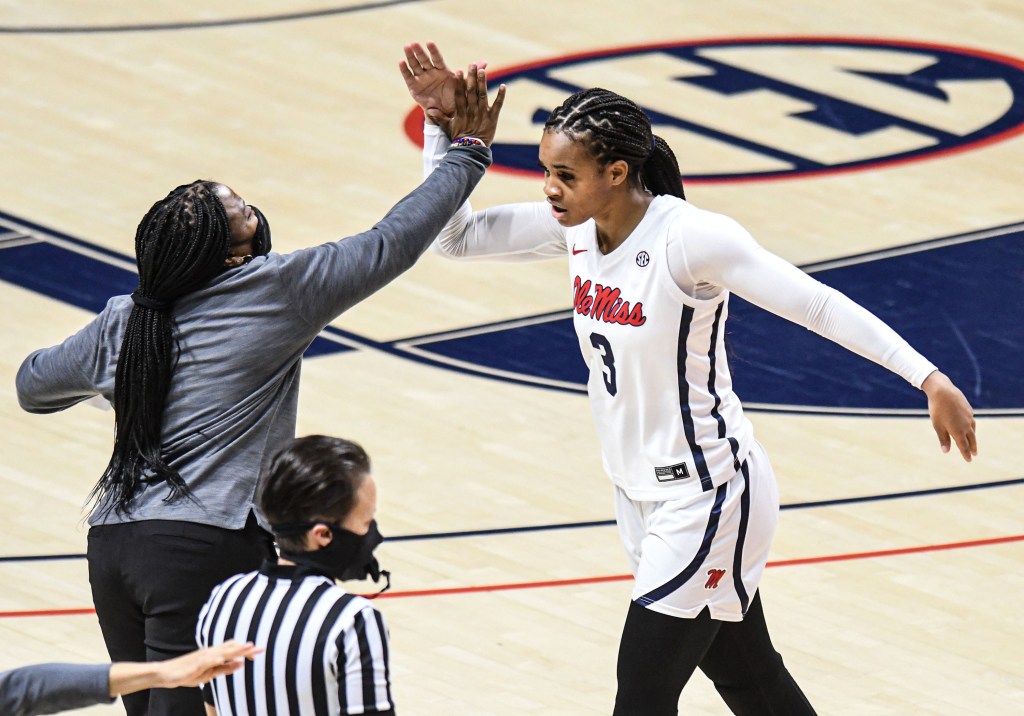 Ole Miss’ Donnetta Johnson (3) celebrates the second of two consecutive made three-pointers with head coach Yolett McPhee-McCuin against Kansas at the Pavilion on Thursday, Dec. 3, 2020. The Rebels won 70-53. (©Bruce Newman)

That is the brand of defense the Ole Miss women are playing under Yolett McPhee-McCuin in her third year. The defense stand on brand on Thursday in the Rebels’ 70-53 win over Kansas at The Pavilion.

The Rebels’ victory notched a win for the Southeastern Conference as the game was part of this season’s SEC/Big 12 Challenge. Ole Miss (2-0) is now 3-0 against the Jayhawks all time.

Offense was the name of the game in Monday’s season-opening win over McNeese State, producing the biggest offensive output under McCuin. On Thursday, the Rebels decided to show what their defensive effort might look like moving forward.

Taking advantage of Kansas’ 25 turnovers, Ole Miss scored 26 points off of them.

“I knew that we would have to disrupt them in order to have a chance and I thought that we did that for three quarters and it ended up paying off for us,” McCuin said. “When you have teams that really thrive on a certain cadence on the offensive end, defensively you have to disrupt that or they would have really punished us. The game plan was to not allow them to reverse the ball. Not allow them to see open people and collectively play team defense.”

Year three in McCuin’s plan for the program is proof of concept, that the assessing and rebuilding a foundation in the first two years are paying off. Signs of that were evident throughout the game as the Rebels responded when Kansas would make several runs.

The Jayhawks (2-1) never led but managed to overcome deficits of as much as 16 to get to within three a few times. In previous years, the Rebels may have caved to the mounting pressure put on by the opposing team’s rally, but on Thursday they proved up to the challenge of holding off another Power 5 team.

“We’ve been through those scenarios a couple times,” McCuin said. “When we had a timeout I didn’t say a word. I just looked at them because this teams believes and they’re all bought in and they’re all in. They came here to do something special. I know we’re young and inexperienced, but what they know is playing hard.”

Shakira Austin’s presence was felt most of the night on the defensive end of the court. The junior transfer’s 6-foot-5 frame created problems for the Jayhawks and she used her size to get two blocks in the game and pulled down four rebounds. On the offensive side, she scored 18 points.

The biggest star of the night was redshirt sophomore Donnetta Johnson. The Queens, New York native scored a game-high 21 points to go with four steals, three rebounds and two assists.

Coming off her debut performance worthy of the SEC Freshman of the Week honor, Snudda Collins scored five points.

“I felt good. I felt free,” Johnson said. “I was able the play the game that I love. I had the opportunity to play tonight and we came out with a win. I was excited to get out on the court and show the world what I was capable of. …I think our chemistry is getting better day by day.”

Ole Miss continues its opening homestand on Tuesday when they host Alcorn State at 6 p.m. CT.