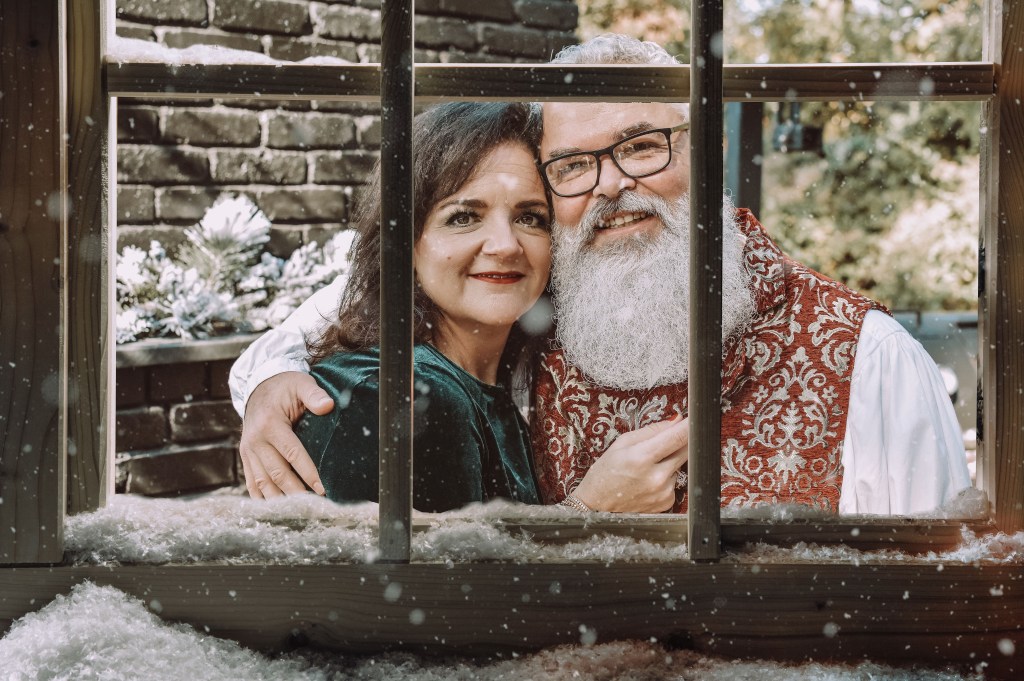 Kent Breckenridge admits that he can’t sit still. When he sees something that needs be done – whether that is a new business or an act of kindness – he isn’t one to wait around to see if someone else will do it first.

“Sometimes you just do. You see a need. I love people, and I do. I just go and I do it. Sometimes people I think I give too much of myself. But it is my heart and I don’t know anything else to do,” said the entrepreneur, father, devoted husband and beloved Santa Claus.

This applies to everything from his business ventures, NextHome Choice Real Estate and FetchT Delivery, to his service as a Santa Claus during the Christmas season.

Breckenridge and his wife Camille are known as Santa Breckenridge and the Dark-Haired Mrs. Claus. During the Christmas season, the couple can be found throughout the region, bringing Christmas cheer to children and adults. It’s a role that fits Breckenridge perfectly – although he was slow to take up the duty.

“I resisted the Santa thing for many years. While I love Christmas, I didn’t want to put on a cheesy suit and costume and go around. Finally, I gave in. I had several people who kept encouraging me to do that, my wife, and my oldest daughter – they kept on, and kept on, and finally I gave in,” he said. “The first year I did a few little things... after I was able to see the kids and the wild eyes and the amazement and all the excitement that went on. I was hooked. Last thing in the world I thought I would be doing. It has grown every year since then.”

The couple subsequently were trained at the Charles W. Howard Santa Claus School.

From appearing at the Oxford-Lafayette County Chamber of Commerce’s anniversary celebration on Friday to an appearance Saturday in Baton Rouge, La., to a six-week rotation of duties at the Bass Pro Shop, to making special requested trips to appear, he will stop at no lengths to spread the joy of the season.

One time, the Breckenridges traveled on Christmas Eve to Tennessee arriving at a family’s home just after midnight. There, he woke up a sleeping six-year-old child to tell him he had gotten his Christmas wish: A forever family. He was being adopted. After sharing the good news and eating some carrot sticks with the child – who preferred them to cookies and milk – Santa Breckenridge tucked the child back in bed, leaving him with his magic hat to remind him of the visit and “that no matter what happens, he can do anything he wants,” Breckenridge said.

Last year, Santa Breckenridge was able to combine his duties of co-owner of FetchT. The business received a request for a meal delivery to a woman’s home, which had been placed by her family. When placing the order, the out-of-town family noted that the woman was battling advanced cancer and due to her fatigue and weakness from chemotherapy, she may be slow to answer the door. Santa Breckenridge decided some Christmas magic was in order.

“I put my suit on, and Santa showed up to bring her lunch and try to put a smile on her face,” he recalled.

It is not just the customers of FetchT delivery service who have felt the love from Breckenridge. So have the dozens of restaurants in the region who have partnered with the service during the time of COVID-19.

Breckenridge and his stepson Brame Garner, a junior accounting major at the University of Mississippi, started the business several years ago. Garner wanted to start his own business and approached Breckenridge with the idea, the pair co-own it 50/50 and are involved in every aspect of it. The business has been growing rapidly over the last couple of years, buoyed in part by the rise of technology driven delivery services, and then the sale of another rival service to a large corporation. Many restaurants switched to FetchT because they wanted to keep their money local and support another local business. FetchT moved into the Oxford market at that time adding dozens of new restaurants to their service.

Then the COVID-19 pandemic struck. It put them in a position not only to continue to grow, but to do good for other businesses and their entire community at the same time, said Breckenridge.

“We are honored that we were able to be in a place to help this year. We never figured that any of us would be in this situation. When the pandemic hit, we were asked to stay open if we could,” Breckenridge said. “We tried to position ourselves where we could do that and be a link for the restaurants. We know some of them would have had a very difficult time, and may not have survived if we hadn’t been able to help. We got out there and did whatever we could do to help them. We saw ourselves as part of their team.”

Pam Swain, vice president of the Chamber of Commerce, said she’s heard from many local businesses that FetchT has been extremely valuable.

“I can’t put into words how much it has meant to the community during the pandemic,” she said. From individuals, like herself, who have used the service during this time to restaurants who have relied on it to keep the doors open.

But that’s not all FetchT does to share joy and prosperity. A portion of the faith-based business’ profits go to support Christian mission work both at home and abroad.

“Our focus is on giving back to missions, and that mission is the mission of Jesus Christ to spread The Word. We look very hard at the programs we do” Breckenridge explained, noting they have supported orphanages, and fed disadvantaged children both in the US and abroad, given scholarships to the Christian–based basketball program Upward. S

“We know even though we worked very hard that we are blessed. We didn’t do this by ourselves,” Breckenridge explained.