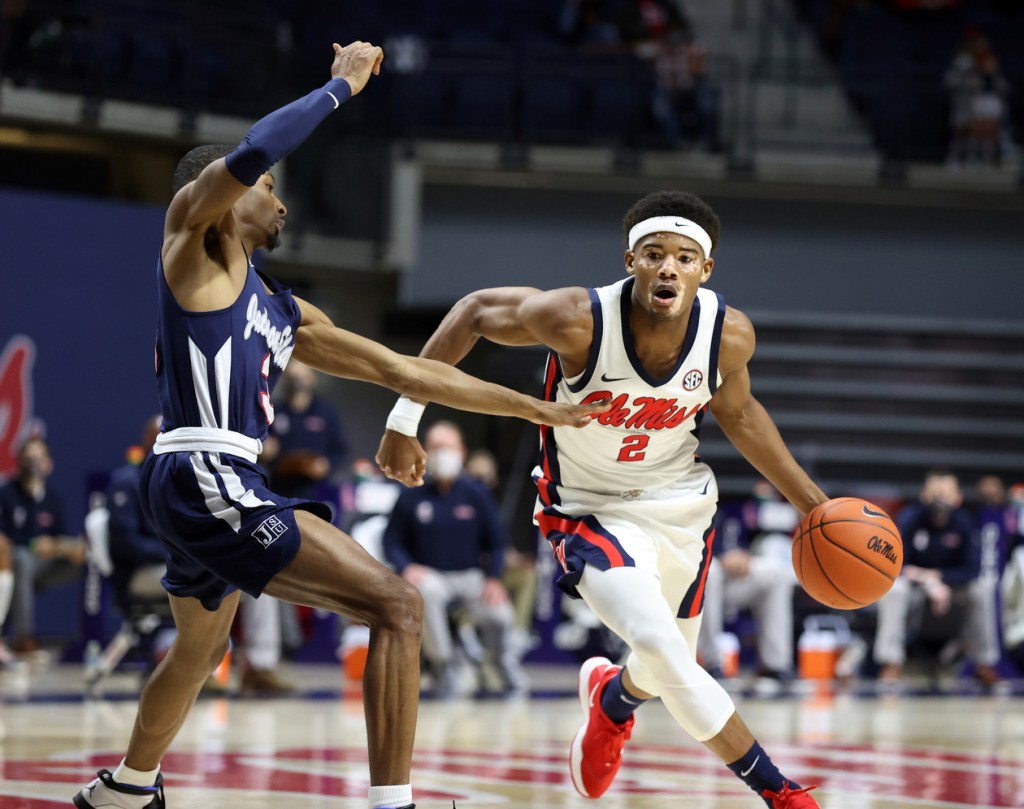 After being away from the court for 21 days, the Ole Miss men’s basketball finally got their 2020-21 campaign underway on Thursday.

Ole Miss was the final Power 5 team to play their first game of the season after Tennessee played on Tuesday night.

There may have been a little rust to knock off as the Rebels were slow out of the game, trailing 6-4 in the first three-plus minutes of the game. From there, the Rebels (1-0) took off with the help of a 20-0 run in a nearly eight-minute span to break the game open.

“I think our depth took its toll a little bit,” Davis said. “I thought Jackson State really came out and played hard. They really did. They got out in the wings and took us out of a few things with their pressure. I don’t know why that surprised us, we do that to ourselves. …During a time where we weren’t doing great, offensively, we just get stop after stop after stop.”

Devontae Shuler kicked off his senior season with a strong performance, shooting 9 for 10 from the floor and 5 for 5 behind the three-point line for a game-high 23 points. He also finished with three steals, two assists and a rebound.

After sitting at home for two weeks when the program shutdown after experienced a COVID-19 outbreak, Shuler was ready to finally take the court himself and not watch others.

“Sat back and we waited and watched a lot of other teams play on TV,” Shuler said. “I feel like coach prepared us mentally and physically to come out in our first game and be able to come out and get stops. It felt great. Our team is very hungry.”

In his Ole Miss debut, former Oxford High School standout Jarkel Joiner got the start and finished with six points, two assists and a rebound in 23 minutes of action.

Other newcomers, Romello White and Khadim Sy, combined for 19 points and eight rebounds. The pair created a new presence underneath the basket that can give teams problems if they continue developing in the early portion of the season.

“I thought Romello was really good the first half,” Davis said. “We set up some things and Khadim has shot the ball about as good as anybody on our team during camp. So, he got some pick and pop opportunities, which was good. We didn’t rebound the ball great tonight I didn’t think. …Those two guys are both established, veteran players.”

Ole Miss returns to the court on Saturday against UNC Wilmington with a 4 p.m. CT tipoff as part of a doubleheader with the women’s team. The Lady Rebels (3-0) host Mississippi Valley State at 1 p.m. CT.