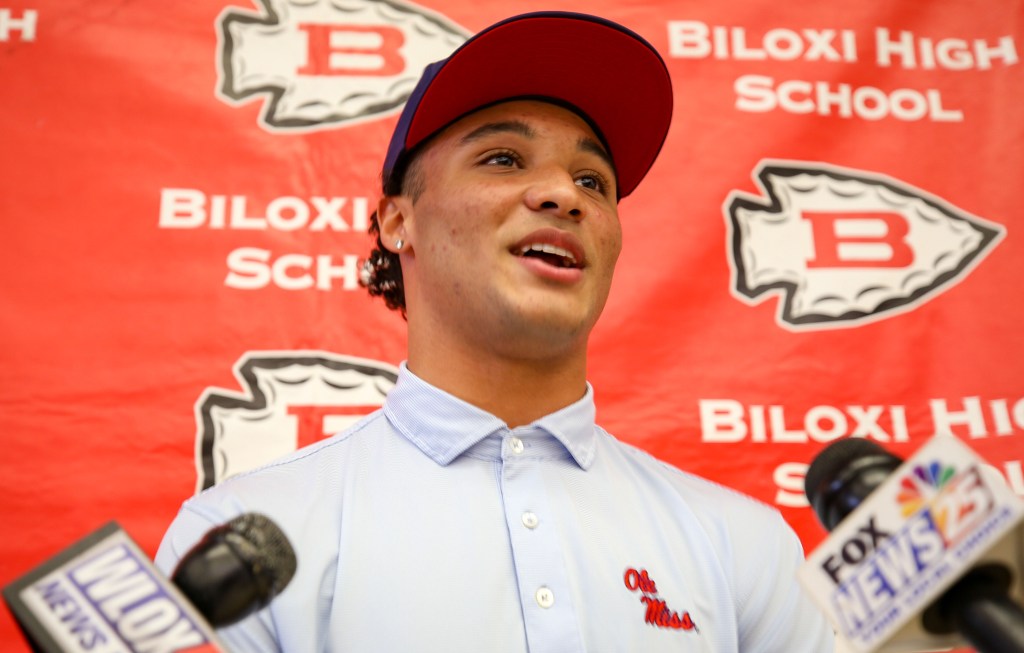 The early National Signing Day period began on Wednesday, and by the end of the day, Ole Miss made its defense better for the future.

Of the Rebels’ 22 signees, eight are defensive backs and three more are defensive linemen. The focus for first-year head coach Lane Kiffin and his staff was clearly on improving the secondary and a defensive front that lacked depth this season.

The effects of how the 2021 signing class can improve the defense could be seen come next spring, as all eight defensive backs are enrolling in school in January.

One of the biggest signings came late in the day when Markevious Brown, a four-star corner back out of IMG Academy picked Ole Miss over Auburn, Alabama, Miami and others. Another key signing came from in-state when three-star George County corner back MJ Daniels chose the Rebels over Mississippi State.

Daniels’ flip from the Bulldogs to Ole Miss seemingly overnight was one of a few recruits Kiffin was able to successfully flip. Wearing a shirt that read “The Most Exciting Team in College Football,” Kiffin gave his thoughts on what a verbal commitment to another school means and how he and his staff approach those players.

“It doesn’t mean anything,” Kiffin said of the verbal commitment. “Until a kid signs, it really doesn’t mean anything. Their commitment only tells you who your challenge is. Who you’re going against. …A month or two ago, I’m sure everybody thought we sucked and can’t recruit. There’s kind of a plan when you’ve been doing this long enough. It’s all game until they sign.”

Another flip was quarterback Luke Altmyer. The Starkville native was verbally committed to Florida State until he reopened his recruitment on Nov. 30. By the end of that week, he committed to Ole Miss and made it official on Wednesday.

In the past month, Ole Miss shot up the recruiting rankings by nearly 30 spots. By Wednesday evening, the Rebels were sitting at No. 18 overall in both 247 Sports and Rivals’ composite rankings. They were also the No. 7 best recruiting class among the Southeastern Conference teams.  Between both recruiting site’s rankings, Ole Miss signed a combined 12 four-star recruits.

The surge in momentum of prospects choosing Ole Miss can be pinpointed to one specific commitment, according to Kiffin.

“People say what was the turn in recruiting? I think one was on-field performance and us playing well and showing our players having fun, the uniforms and the energy, and I think the second thing was Luke turning,” Kiffin said. “Then it became the cool thing to do and he helped recruit these guys, too.”

In preparing for life without Elijah Moore and other receivers, Kiffin restocked the wide out position with three signings. Two signings came out of state in Bralon Brown out of Miramar, Fla. and JJ Henry out of McKinney, Texas. The third signing came from Hartfield Academy’s Brandon Buckhaulter out of Flowood.

Here is a full list of Ole Miss’ signees from Wednesday: