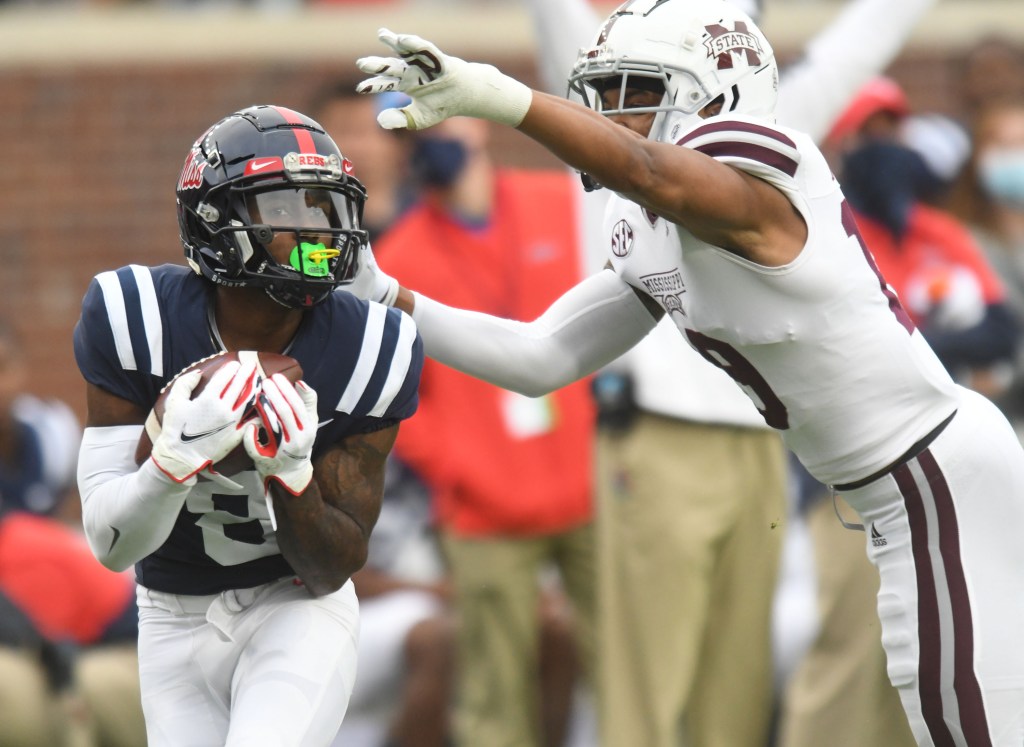 During most years, if a football team was still practicing in mid-December, it is usually in the midst of a bowl game preparation – except for this season.

Ole Miss resumed team activities last Friday after being shut down for over a week due to an outbreak of positive COVID-19 cases that hit the program following last month’s Egg Bowl. Practices are continuing this week as the Rebels prepare to close out the regular season against LSU on Saturday.

This weekend’s game will be the first one since Nov. 28 when the Rebels (4-4) defeated Mississippi State. With three weeks between games, hitting the reset button and getting back into a rhythm has been the challenge for head coach Lane Kiffin.

Closing out the regular season at Tiger Stadium is a motivation tool Kiffin has employed.

“Just talked to them a lot this morning about the importance of the game,” Kiffin said on Monday. “You’re going to remember the rest of your life if you go into Tiger Stadium and beat LSU. Nobody’s going to remember if it’s COVID or opt-outs or any of that stuff. Pretty neat. None of these guys have done that. This is a huge game and really important too, besides beating LSU, I think all of you guys would’ve said that this was a successful season, after seeing the all-SEC schedule rollout, that you’re going to have a winning record, so it’ll be awesome.”

LSU (4-5) is coming off the 37-34 upset win at No. 6 Florida last week. The Tigers have had an abysmal year following the 2019 season where they went undefeated on their way to a national championship.

With three different starters at quarterback through their first nine games, the Tigers turned to freshman quarterback Max Johnson in their win over the Gators. Johnson threw for 239 yards, three touchdowns and no interceptions.

Heading into Saturday’s game, which was originally scheduled for Dec. 5 but was postponed to allow the Tigers to make up their game against No. 1 Alabama, there is newfound momentum in LSU’s locker room.

“That changed everything. You could see post game, their energy,” Kiffin said of LSU’s win over Florida. “They played extremely hard in the game. The game could’ve gone the either way 100 times. You don’t throw a shoe and you’re probably talking about a whole different deal. I think that re-energized them. It would’ve been a lot harder if you lose that game, you go back and are on whatever losing streak they would’ve been on. I’m sure that gave them a bunch of energy and they want to finish strong.”

Regardless of Saturday’s outcome, there is a strong chance Ole Miss receives their first bid to a bowl game in five years. Winning at LSU could boost their chances of higher profile bowl game as well as finishing a 10-game conference schedule with a winning record.

Getting another couple weeks of practice is also something Kiffin views as a positive, especially for the younger players and getting some of those practices lost in the spring due to COVID-19.

“I hope it’s not if it happens, I’m assuming it’s when it happens,” Kiffin said of a bowl bid. “We’re excited about that. It helps for development of all your players. Fan energy, it will be great to play in a great bowl game. Actually, some of our mid-year signees that will be January guys can actually come practice for a few days with us. That’ll be pretty neat too.”