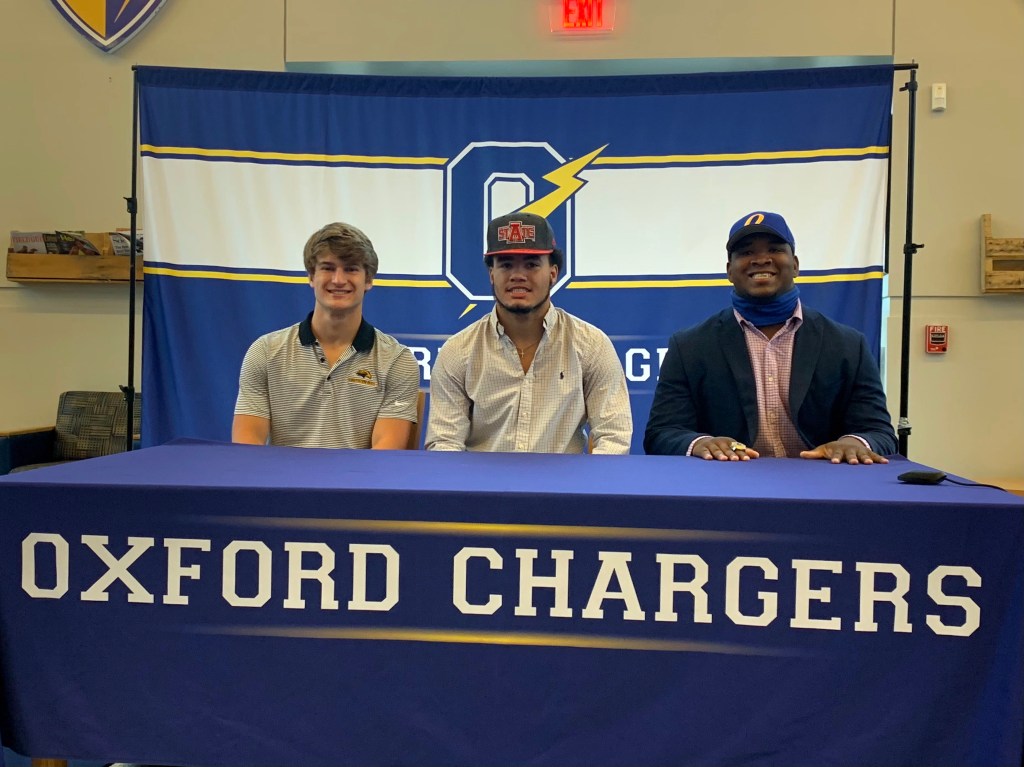 Three Oxford High School standouts decided to announce which school they would sign with on Wednesday.

Jahmal Pegues, Tristan Shorter and Jack Tannehill made their minds up made their selections official inside the OHS library with family and friends.

When USM fired Jay Hopson and then hired Tulane offensive coordinator Will Hall earlier this month, it brought both of those worlds together for Tannehill, who signed with the Golden Eagles on Wednesday.

“Knowing coach Hall liked me and wanted me, that’s what I looked for most — to be wanted,” Tannehill said. “It was scary at first, because I’ve lost a scholarship before. That was my biggest question, and once it was answered it was easy sailing.”

Shorter also had to deal with a coaching change during the final weeks of his recruitment. The standout linebacker signed with Arkansas State, joining Butch Jones’ first-year recruiting class.

Jones was hired earlier this month, replacing former head coach Blake Anderson, who took the head coaching job at Utah State. Shorter had been offered by Arkansas State under Anderson’s staff, but playing for Jones is something that appealed to Shorter.

Shorter spoke with Jones after playing in last weekend’s Mississippi-Alabama All Star Football Game in Montgomery, Ala. Jones watched the Charger play and liked what he saw.

“Coach Jones called me and thought I would be a good fit,” Shorter said. “It was crazy because I’ve seen coach Jones at Tennessee and Alabama. So, I never figured that he would be coaching me one day. He called me and it was just a normal conversation to say he liked how I played.”

Shorter finished his career at Oxford with 206 total tackles, four sacks and seven interceptions. He was instrumental in getting the Chargers to their second-straight Class 6A state championship game with key plays against Madison Central and Clinton.

In his Oxford career, Tannehill converted 43 of 57 field goal attempts and missed only one extra-point try, converting 132 out of 133 attempts for a school record 261 kicking points.

Pegues, the cousin of former OHS standout and current Auburn Tiger J.J. Pegues, committed to Jacksonville State. The two-year starter on Oxford’s offensive line helped pave the way for former quarterback John Meagher to rush for 1,000 yards in 2019 and running back Omar Howell run for 950 yards this season.

Pegues was named First Team All Region 1-6A the past two seasons and represented Mississippi in this year’s Mississippi-Alabama All Star Football game.

Without a traditional recruiting cycle and the ability to visit campus, Pegues is heading to Jacksonville, Ala. without meeting head coach Rick Pietri. However, Pegues said he liked what he heard from Pietri and his staff via Zoom calls and other forms of communication during the process.

“I saw it (the campus) on Zoom and everything looked real nice and stuff like that,” Pegues said. “I fell in love with the coaches and the environment. … It was kind of tough deciding where to go and stuff, but I found a home.”