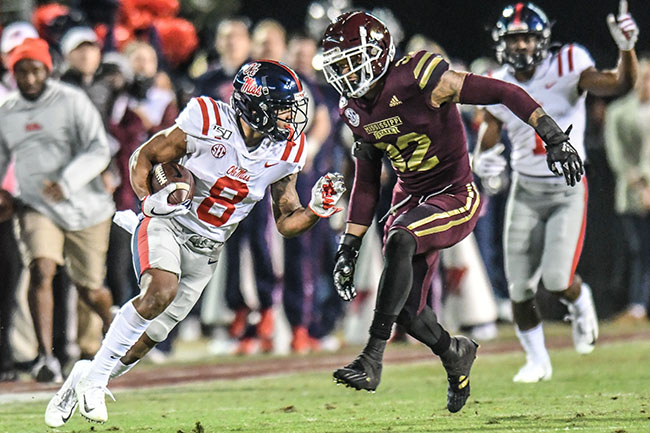 Ole Miss will be without two key players this Saturday and beyond.

Wide receiver Elijah Moore and tight end Kenny Yeboah announced on Thursday their intentions to opt out the remainder of the 2020 season and focus on preparations for the upcoming NFL Draft.

The announcements came as a surprise, with Ole Miss in the midst of practicing for the game at LSU this weekend to close out the regular season. If the Rebels receive a bowl bid on Sunday, as many expect to happen, Moore and Yeboah will not participate in that game, either.

“Since I was 6 years old I have had dreams about playing in the NFL and to make a better way for me and my family,” Moore’s announcement read in a tweet. “After many prayers, tremendous consideration and countless discussions, I will now focus my attention on the 2021 NFL Draft.”

Through eight games, Moore had a nation’s-best 86 receptions for 1,193 yards and eight touchdowns. Moore was second in the nation in receiving yards, only behind Alabama’s DeVonta Smith’s 1,327 yards.

Moore is a semifinalist for Biletnikoff Award. No other SEC receiver has recorded that many receiving yards through the first eight games of a season.

“While we’re disappointed that Elijah and Kenny wont be joining us at LSU and our bowl game, we are excited about their future at the next level and how they will represent Ole Miss in the NFL,” Kiffin said. “We appreciate them helping launch this program to a championship level, and we wish them the very best in their growth as both players and men.”

Matt Corral, who intends to return for the 2021 season, will be without two of his favorite targets in the final two games of the season, with Yeboah announcing his future plans directly after Moore.

Transferring from Temple, Yeboah instantly became a key fixture in the Rebels’ offense. In his one season in Oxford, Yeboah hauled in 27 catches for 527 yards and six touchdown.

“My time at Ole Miss was one that I will never forget,” Yeboah’s statement read. “I am so blessed to have such a great fan base during my one year at Ole Miss. This by far was my favorite year of college. WITH THAT BEING SAID…. I proudly announce that I am turning my full focus on the 2021 NFL Draft to be prepare myself for what lies ahead.”

Father God…I thank you. Ole miss..I love you forever. You hold a special place in my heart. Time to go even harder…KY✌🏾❤️💙 pic.twitter.com/FjwW8A92IE