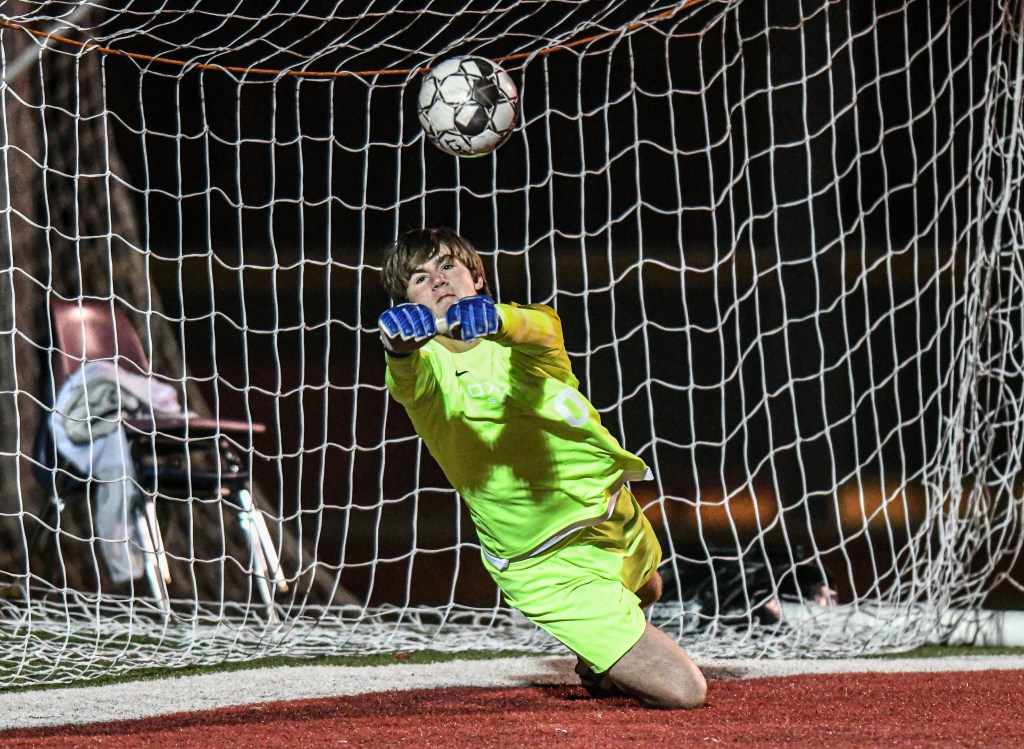 Oxford High’s Jackson Newman knocks down a penalty kick against Lafayette High in boys soccer at William L. Buford Stadium in Oxford, Miss. on Friday, Dec. 18, 2020. Oxford won on penalty kicks after the match ended in a 1-1 tie.. (©Bruce Newman)

The two teams met on the soccer field for the only time this season, with both the Chargers and Commodores hosting a match. The girls met at Bobby Holcomb Field, followed by the boys playing at William L. Buford Stadium to conclude the unique doubleheader.

The Chargers claimed bragging rights for another year, sweeping the Commodores with an impressive win in the girls’ match and a dramatic win in sudden-death penalty kicks in the boys’ match.

For the first time in 367 days, the Lady Commodores tasted defeat in their 3-1 loss to Oxford. The last time Lafayette (9-1) had to make a notch in the loss column was against Saltillo on Dec. 17, 2019.

The Chargers (11-1-1) came out fast with a goal by Ivy Dennis in the second minute and then doubled their lead after a goal by Grace Freeman in the 29th minute.

“In the first five minutes we want to jump out and get an opportunity around the net and see if we can get one early and we did tonight,” said Oxford head coach Hunter Crane said. “That really set the tone for us for sure.”

Friday’s win was No. 99 for Crane as Oxford’s girls coach and the first chance for win No. 100 will come early next month after the holiday break.

Lafayette responded to Oxford’s quick start to open the match with a quick start of their own to open the second half. Caroline Perkins in the 45th minute, cutting the Chargers’ lead in half.

It remained a one-goal deficit for much of the second half until TG Hamilton provided some insurance with a goal in the 69th minute.

“We didn’t step to the ball on the first goal so we got down quick,” said Lafayette head coach Melinda Scruggs. “I think that’s something we need to adjust to in the long run. …Across the field I thought our girls did so many good things. We created so many chances, we just could not put the ball in the net.”

It took all 80 minutes and more to decide a winner in the boys’ match.

Oxford escaped the victor in sudden death penalty kicks after tying 1-1 with Lafayette at the end of regulation. The two teams remained tied after the first round of penalty kicks as each made three out of their five attempts.

Getting some experience with penalty kicks in December is something Crane hopes his team will benefit from come playoffs.

“That’s why we like to do the PK shootouts. That way we get a feel for them,” Crane said. “This is probably the closest we’ll see to a playoff shootout. So, it’s important for us to come out and do what we did.”

The Chargers (8-5) struck first with a goal by John Perry in the 2oth minute. The lead was short-lived as Lafayette’s Nate Dees found the back of the net seven minutes later for what became the final score at the end of regulation.

In the second half, the Commodores (4-5-1) seemingly had control of the match with possession in the Chargers’ side of the field several times. Anthony Jones had a couple good looks at the goal to give Lafayette a lead, but one shot hit the post and the other just missed the goal on the right side.

Playing close matches but being unable to get that one goal to put them over the top has been the story to Lafayette’s season thus far.

“We probably had more real opportunities in the second half than (Oxford) did,” said Lafayette head coach Gene Anderson. “If we had put it in, it would have been a different game. That’s kind of where we’ve been so far this season. Up and down. Sometimes we finish, sometimes we don’t. We’ve been in pretty much every game we’ve played in. The biggest difference in the season has been some games we score three or four (goals) and some games we shoot 20-something times and get one.”

Both Oxford and Lafayette take a the next couple weeks off and resume play in early January.