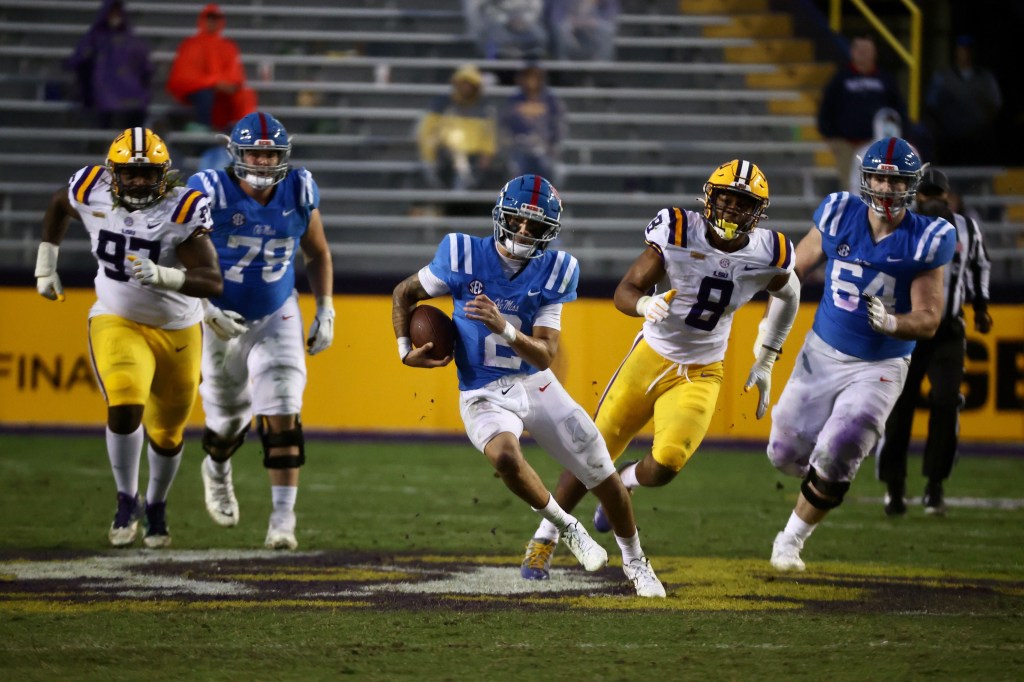 BATON ROUGE, La. — Ole Miss nearly left Death Valley with a rare win but instead handed victory to the LSU in the final seconds.

Rallying from a 16-point deficit, the Rebels were unable to complete the comeback as Matt Corral fumbled inside the LSU 30 in the final seconds to seal the 53-48 win for the Tigers.

Turnovers were the story as Corral committed six of them, including five interceptions for his worst outing since the six interceptions against Arkansas two months ago. LSU (5-5) capitalized on the mistakes, scoring 33 points off the Rebel turnovers.

With a two-point lead and less than six minutes to go and the Tigers without a timeout, the Rebels ran the ball a couple times with little success. Needing a few first downs to secure a win, they were unable to do so and gave the ball back to LSU with a short field.

The Tigers went on to score what became the game-winning touchdown by Kayshon Boutte on the ensuing drive. Boutte finished with 308 receiving yards and three touchdowns for LSU.

“We looked really rusty, especially after the first series on offense,” said Ole Miss head coach Lane Kiffin. “We don’t finish it. We turn the ball over six times. …It’s really a shame because we had them. You’re not going to get many opportunites like that. Certanily opportunities with opt-outs, COVID and an almost empty stadium at LSU. You’re not going to get that again.”

Saturday’s regular season finale was the first for Ole Miss (4-5) without its star wide receiver and top tight end. On Thursday, Elijah Moore and Kenny Yeboah announced their decision to opt out the remainder of the 2020 season and prepare for the upcoming NFL Draft next Spring.

Getting the start in their places were sophomore Johnathan Mingo and redshirt freshman tight end Casey Kelly. Mingo finished with two catches for 38 yards and Kelly finished with one catch for 57 yards.

The player who benefited the most from Moore’s absence was Braylon Sanders. The senior tied running back Henry Parrish with a team-high four catches for 70 yards and two touchdowns.

“In the passing game I would have expected us to have better numbers. That was (LSU’s) weakness,” Kiffin said.

Ole Miss found great success in the run game, especially in the second half. As a team, the Rebels rushed for 307 yards and three touchdowns on 48 carries. Corral led the team with 158 yards and a touchdown on 17 carries as he was flushed out of the pocket several times by the LSU defensive front.

Parrish finished with 82 yards and two touchdowns on 16 carries.

Ole Miss now turns its attention to a possible bowl bid that will be announced on Sunday. There were a few different landing spots predicted for the Rebels, but Saturday’s loss could have altered those predictions.