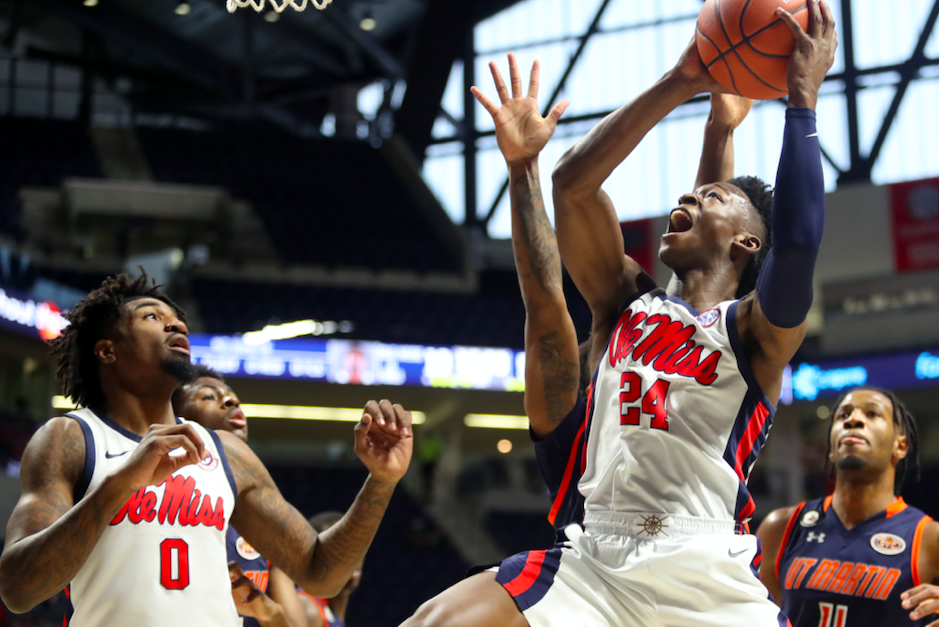 Ole Miss’ Jarkel Joiner (24) attempts a shot against UT-Martin at The Pavilion on Tuesday, Dec. 22, 2020. Joiner finished with a game-high 16 points, which is the most the Oxford native has scored in a Rebel jersey. (Petre Thomas/ Ole Miss Athletics)

Searching for offense, Ole Miss head coach Kermit Davis found what he was looking for on Tuesday — at least for one game.

The Rebels relied on the long ball to put away UT Martin, 90-43, at The Pavilion in the final non-conference game ahead of Southeastern Conference play beginning next week.

DeVontae Shuler and Romello White had been providing the points on a nightly basis, but Davis needed other role players to start pulling their weight as the season rolls on. KJ Buffen, Austin Crowley, Jarkel Joiner and Matthew Murrell provided the extra offense in Tuesday’s win.

Buffen and Joiner scored a game-high 16 points, which is a career-high for Joiner as a Rebel. Murrell added a career-high 13 points and Austin Crowley scored 11 points.

“We just keep encouraging Matt. He’s an elite shooter,” Davis said. “I think he’s got a really good mid-range game. He’s athletic at the rim. We talk about him getting more paint touches and being athletic at the rim and get himself to the (free throw) line. Just like a lot of young guys. Not getting to see it go through the hole early and today I thought he really relaxed and guarded well.”

The Rebels (5-1) continued to have a solid start to the season, defensively. For the fifth time out of the first six games, Ole Miss held their opponent to less than 60 points and the Skyhawk’s 43 points is the lowest total allowed by the Rebels this season.

Creating offense from defense continued to be a staple for the Rebels on Tuesday, scoring 26 points off of 20 UT Martin (3-2) turnovers. As a team, the Rebels finished with seven steals and five blocks.

“We’ve talked a lot in the last three or four days just about second half defending,” Davis said. “Even against (Middle Tennessee). We were good, but not as good. Some of the games early at home, not as good in the second half. Dayton, obviously, had some breakdowns at the end that cost us. But I thought today our defensive intensity stayed the same throughout.”

Tuesday’s game completed a stretch of six games in 13 days for the Rebels, who attempted to play catch up after missing the first two weeks of the season due to having to shutdown from a COVID-19 outbreak.

Ole Miss turns its attention to the start of their SEC slate with a trip to Alabama on Dec. 29.